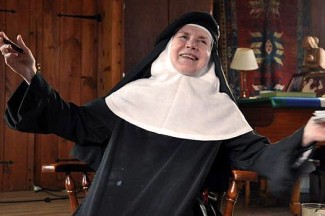 “Mr. Martin, why would you wanna be a priest when you could be a comedian, and have all that money and be famous?” asks Ricky. (Ricky is one of the freshmen in my sixth period theology class. He likes to cause diversions. He also makes some strong assumptions about my talent.) In my first post I wrote about how the Oscars were my Super Bowl growing up. I was in awe of the movies and everything related to them and I couldn’t wait to grow up, go to Hollywood, and be a part of that glistening world.

Dolores Hart was a part of that world. In the late 50s and early 60s she was an up and coming starlet, sort of the Selena Gomez or Amanda Seyfried of the Eisenhower era. She co-starred alongside the Justin Bieber of her time, Elvis Presley, in not one but two movies. Her star was ascending and she seemed to have it all. And just like that, she gave it all up and became a nun. Hart’s story is the subject of the film God Is the Bigger Elvis, which is nominated for an Academy Award for Best Documentary Short.

I’ve known the generalities of Hart’s life for years — with my family’s inordinate fascination with show business outdone only by their piety, Hart was sort of an unofficial patroness for our household. So when I became a Jesuit after toiling away in the world of comedy for the better part of a decade, the comparisons with Hart were inevitable, despite the fact that she was a legit film star and I was a hack comic plugging away at small, smoky nightclubs. In my family we like our delusions full of grandeur.

God Is the Bigger Elvis and its message — that is, to live according to your principles and convictions regardless of the cost — is especially relevant in this age of Kardashianism, where money, prestige and fame trump everything else.

All joking aside, Hart’s story is an incredibly challenging one for any true believer. Hart stands before us all and insists upon a life lived with integrity and faith. The film and its message — that is, to live according to your principles and convictions regardless of the cost — is especially relevant in this age of Kardashianism, where money, prestige and fame trump everything else. Here is this woman who had everything we, as a culture, hold dear, and she gave it all up to live the life of a cloistered female religious.

Hart says about entering religious life, “I never felt I was leaving anything.” For her there were no regrets, as there was no loss, only gain. She might have been departing Hollywood, but she was entering the Kingdom of God. Her sentiment goes hand in hand with an authentic vocation: there is a sense of purpose and rightness in an authentic, honestly lived life, without a sense of remorse.

What I was created for

For myself, one day when writing it occurred to me that my dream, which at any given moment was to win an Oscar, appear on Saturday Night Live, or star in my own sitcom, would always just be one more thing. One more “to do” checked off an infinite “to do” list. There would always be something else and it occurred to me that the fulfillment I was searching for, that I thought I would find once I won the Oscar, got cast on Saturday Night Live, or made that network deal wasn’t going to happen. I was confusing happiness with a dangling carrot.

When speaking of her own vocation Hart states that it is “to help people to discover you can always find hope.” And while there are no golden statues given out for that, in the end (and come to think of it, in the beginning and middle, too) the reward is infinitely greater.