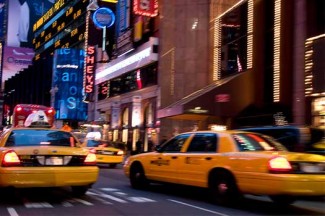 My old faithful hunter green suitcase trailed behind me as I emerged from the terminal at LaGuardia Airport in New York City in April.

Although I had been planning my first trip to the Big Apple for months, my excitement completely disappeared when I ascended from the terminal to be greeted by scowling, impatient faces and noise that buzzed in my eardrums.

My sister met me as I exited the baggage claim area and escorted me to the bus that would take me to the chic Harlem apartment I’d be staying in with a friend.

Instead of being thrilled and excited, waiting for the skyline to appear as I rode the bus for nearly two hours, I concentrated on the frigid air that tickled my feet, whizzed up my legs, and enveloped my upper body.

I was cold. And if anything, the freezing temperatures (unintentionally) acted as a barometer for my overall experience of the city I’d always imagined I’d escape to in order to live out my Carrie Bradshaw dreams — just like every other writing woman with an obsession for Sex and the City.

My weekend in New York was a blur of catching trains named with random numbers and letters, eating a chicken taco from a food truck, learning the difference between yellow cabs and “gypsy” ones, shopping in SoHo, having brunch in Brooklyn, exploring Times Square at night, waiting for an hour to eat dessert while inhaling a piping hot slice of white pizza. And feeling like I didn’t fit in.

I questioned myself during every moment of the trip. I felt insecure about my Southern accent, the clothes I chose to wear, and the fact that I only knew where I was going because I was being led around by New Yorkers. I didn’t connect with the bustling city that never sleeps. I came away feeling that all the wonderful things people said about New York were untrue.

As I walked to dinner with a friend who was a New York transplant from Atlanta, she candidly talked about how she moved from the South because it was “too slow” and that New Yorkers embody the get-up-and-go that she needed to push her to succeed and get things done.

I nodded, completely understanding that when she moved from Atlanta years ago, she needed that change. But what I want and need for my life is so different.

Why didn’t it seem that special and great to me? And why did I genuinely feel that living in New York City at some point in the future would never be a viable option for me?

I think I know why.

My last night in New York, as I walked to dinner with a friend who was a New York transplant from Atlanta, she candidly talked about how she moved from the South because it was “too slow” and that New Yorkers embody the get-up-and-go that she needed to push her to succeed and get things done.

I nodded, completely understanding that when she moved from Atlanta years ago, she needed that change; and New York, as hectic, supercharged, busy and full of things to do and people to see as it was, fulfilled that need.

But what I want and need for my life is so different.

Even Atlanta — as slow as it may seem to some people, especially New Yorkers — is full of people concerned only with chasing notoriety and career and financial success. At times it seems like there isn’t enough emphasis on reaping the benefits of living a truly good life, one where you are not only loving to self, but selfless and giving to others as well.

The sense I gathered from my short visit to New York was that it was comparable to Atlanta in precisely that way. I want to run far away from the rat race where I’m so busy getting things done and working that life itself, all its joys and pains, passes me by in the process.

My feelings presented an opportunity to turn inward, to pray more and to make prayer a more significant part of my spiritual life than it had been before. I began to recognize the importance of paying special attention to the feelings that arise in the midst of new experiences, in the company of new people, or in unknown situations.

My spirit dragged during the weekend in New York. This was not only a sign that the city was not the place for me; it also highlighted how paying attention to my feelings and moods could help me to more deeply discern where God wants me, both geographically and spiritually. Because I know one thing more than any other: it is not God’s will for me to be anywhere where misery becomes my steady companion and where I’m not being spiritually fed.

I did not leave New York clinging to an “I [Heart] NY” T-shirt or a resolution stirring inside to return to “make it” in the city. I did come away knowing inside that I, like my friend, would soon find the place that offers me more of what I am seeking for my life ahead.