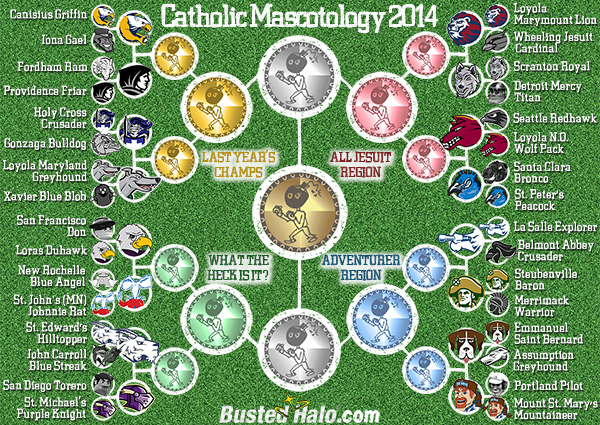 It was an exciting first day of Catholic Mascotology 2014, with some predicted wins as well as a number of upsets.

Top-seed Canisius Golden Griffin easily dispatched the Iona Gael and today faces the Providence Friar which skimmed past the favored Fordham Ram. Oh, what shame, Busted Halo® interns! (All of whom attend Fordham.)

We started with two greyhounds, and now we’re down to just one, as last year’s runner-up, the Loyola Maryland Greyhound beat out the Xavier Blue Blob, while the Emmanuel St. Bernard won over the Assumption Greyhound. The Loyola Greyhound today faces the Holy Cross Crusader, who isn’t the only knight left in the contest: the St. Michael’s Purple Knight remains to face off against the Hilltopper of St. Edwards.

One of our favorite mascots is still in it! The St. John’s Johnnie Rat managed a win over its competition (doing away with the New Rochelle Blue Angel) and goes on to face the Loras College Duhawk, who yesterday destroyed the favored San Francisco Don, and is the only No. 8 seed remaining in the bracket.

Elsewhere, we have some Iggy on Iggy action today as Iggy the Loyola Marymount Lion goes head-to-head with Iggy the Scranton Royal. Iggy the Lion and his distant relative, Havoc the Wolf of Loyola New Orleans, are both responsible for doing away with the only two competing red birds in the contest: the Wheeling Jesuit Cardinal and the Seattle Redhawk. (Loyno over Seattle was by far the closest of yesterday’s contests, with the Loyola Wolf Pack winning by only 26 votes!)

Speaking of birds, the St. Peter’s Peacock joins his fellow No. 7 seeds, the Mount St. Mary’s Mountaineer and St. Mike’s Purple Knight, who all three upset their No. 2 seed opponents, leaving the Santa Clara Bronco, Portland Pilot and San Diego Torero all wondering what happened once the dust had settled. (An interesting note: all three of those happened to be costumed and not logo mascots, and with the demise of the Detroit Mercy Titan and the San Francisco Don, all costumed mascots have been wiped out in the first round.)

The Canisius Golden Griffin is the defending Catholic Mascotology champion and top seed of this year’s tournament. Half lion, half eagle, the mighty Griffin allows Canisius College two mascots in one. And of historical note, being a beast of both the land and the air, the Griffin was seen in old Christendom as a symbol of Jesus — both human and divine.

The Providence Friar wasn’t always the Providence mascot. Originally it was a Dalmatian purchased by the Friars Club and brought to games beginning in 1935. This was in keeping with the Dominicans’ nickname as “watchdogs of the Lord” as Providence is the only college in North America run by the Dominican order. After the 1963 death of the fourth Dalmatian Friar, the school decided on a more human representation: an actual Friar mascot.

The Holy Cross Crusader came about officially in 1925 when, following an article that referred to the Holy Cross baseball team as “crusaders,” the school paper took a vote and “Crusaders” won by a landslide over “Chiefs” and “Sagamores” by more than 100 votes.

The Loyola Maryland Greyhound, named Iggy in honor of St. Ignatius of Loyola, is the runner-up in last year’s Catholic Mascotology. Born in the autumn of 1927, the Greyhound replaced the previous and less distinctive team names, “Jesuits” and “Irish”. The mascot has been portrayed throughout the years by live greyhounds as well as a costumed one.

The Loras College Duhawk, named Dewey, was born in 1924, compliments of a sports reporter (like so many of these mascots) who contracted the words Dubuque (the Iowa town of the school’s location) and Hawk to describe the then Columbia College (which became Loras in 1939) football team. Or, as described by Urban Dictionary, a duhawk is “basically a hawk on steroids that also happens to be purple and gold.”

The Saint John’s University (Minnesota) Johnnie Rat remains an unofficial mascot of this Minnesotan university, despite being born out of an energetic institution of school spirit well over half a century ago: the St. John’s Rat Pack (or Rat Pak). This raucous, growing and still thriving group of basketball fans began cheering on their team in 1954 in the old basketball arena known as “Rat Hall” and continues today. Even though the team moved out of “Rat Hall” in 1972, the name stuck…unofficially.

The Saint Edward’s University Hilltopper is a goat; no, it’s a ram; no, it’s a goat; it’s a ram; it’s a type of horse used in fox hunting? Despite conflicting reports, the Hilltopper is technically “likened to a mountain goat”, named Topper and legend has that it came about a while back when the baseball team decided to bring a live ram to the game, (even though in 2010 a live goat began attending games).

The Saint Michael’s College Purple Knight has been the official mascot of Saint Michael’s College since 1947, replacing the unofficial team names of “Hilltoppers” (watch out St. Edwards!) and the even less imaginative “Michaelmen”. Also known as Mike D. Knight, the Purple Knight was chosen as the school’s symbol because of the four offices theologians ascribe to the archangel St. Michael: 1) fighting Satan; 2) rescuing souls; 3) bringing souls to judgement; 4) being the champion of God’s people.

The Loyola Marymount Lion, like various Loyola schools’ mascots, is nicknamed Iggy after St. Ignatius of Loyola. Though there are two varying accounts of how the Lion came to replace the name “Loyolans” in 1923, one thing is for sure: the athletes used to hold real live lions.

The Loyola New Orleans Wolf Pack, symbolized by a lone maroon wolf (aka Havoc T. Wolf), has been the moniker of Loyno University since the 1920’s. It too originates from the Shield of Onaz-Loyola, a symbol of St. Ignatius of Loyola family’s lineage, that includes a pair of gray wolves. The Wolf Pack (which officially changed its name from Wolfpack in 2012), symbolizes Jesuit values: strength in numbers and pride in teamwork.

The Saint Peter’s University Peacock is the only peacock mascot in the NCAA Division I. (Upper Iowa being the only other college in the U.S with a peacock mascot.) This choice was made for several reasons. Primarily, the land on which Saint Peter’s now stands was once owned by a man named Michael Pauw, whose last name means “peacock” in Dutch.

The La Salle University Explorer is community-minded and currently in his 5th incarnation. Conceived in 1931 and officially unveiled in 1958 as a 17th century French Explorer, the space-obsessed era of the 1960’s turned the Explorer into an astronaut. In 1982 he resumed his original look until early retirement in 1997. 1998 saw him resurrected as a muscular superhero and voted Philadelphia’s worst mascot. In 2002 he became the Explorer that he is today.

The Franciscan University of Steubenville Baron is the only collegiate mascot keeping alive the title of a revolutionary war patriot: Baron Frederick William von Steuben. The Baron has been around for the past 68 years when it’s rumored a veteran sports writer nicknamed the team because he found the name of the school too long to fit into headlines, or even his news stories.

The Emmanuel College Saint Bernard, nicknamed Halo and formerly a Swiss Alps rescue dog, has now gone on to win the Best School Mascot in Boston award for two years in a row. When he’s not cheering on his school, or checking his Twitter and Facebook feeds, he’s looking up to his hero, the Boston Red Sox’s Wally the Green Monster.