I rolled back into Madrid via bus with the Carmelite United pilgrims earlier last week. It had been six straight days of hiking, followed by a few hours sleep, then the 7-8 hour bus drive to the big city for WYD 2011. This is the first chance I’ve had to post since then, as my week got real hectic real fast and was over before I knew it, mostly spent making videos for WYD with Annie. 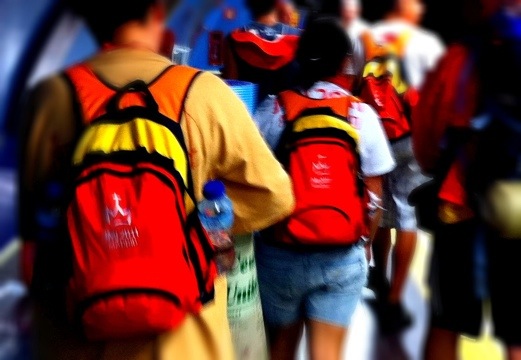 We were all fairly tired when we arrived. In typical WYD fashion, our credentials (those passes that get us in everywhere) weren’t ready, the pilgrims sleeping area wasn’t available to them, and we had nowhere to go for a few hours. It was a weird kind of purgatory, an awkward in-between. One journey had ended, and the next one was having a little trouble getting started.

My feet were killing me from all the walking of the past few days, and in addition to blisters, they had swollen, so much that my hiking boots were becoming increasingly more uncomfortable to wear. I hobbled around in my flip flops with the others, as we went to a restaurant to wait it out.

Eventually everything was squared away. We had our passes, we all had a place to stay and WYD was about to begin.

This was my first WYD, and I have to say, it is an amazing experience to see so many Catholics — young ones, at that — collecting themselves all in one place to join in communion, prayer and celebration of their faith. That being said, I’m not sure it was exactly for me.

Now, I certainly enjoyed all the WYD activities Annie and I joined in, especially witnessing her going to confession for the first time in 10 years, as well as wandering through the Vocations Fair. However, a lot of WYD is joining masses of people in very crowded public areas. I don’t like large groups that much, and I like them even less when they’re shouting, and I like that even less when there are multiple groups shouting back and forth to each other. Of course, there’s a bit of fun to it all and it’s really great to feel such excitement in the air in a very palpable sense, but the aspects of my faith that I feel more drawn to are the quieter, less rowdy ones.

I love wandering into a church in mid-afternoon when there’s only a few people, to share a quick, quiet word with God. I like lighting a candle for a loved one who’s going through a difficult time. And I truly love that moment in the Communion line, right before I receive, when I hear the Lord say to me somewhere internally and deep inside, come and receive me and let me make you better.

My spirituality is more that of the reflective walking of the Camino rather than the throngs of Catholics at the Papal Mass or the singing droves of WYD pilgrims on subway platforms.

And yet this entire week is not one I would ever miss if I had to do it all over. There were so many little instances of divine intervention and inspiration, that even the most cynical and solitary Catholic would be foolish to dismiss:

Annie and I were headed to a Carmelite event to meet up with the other Busted Halo pilgrims, along with Claudette, one of the grandmothers in the group. We were running about a half hour late, confused with directions, and desperate to make the next Metro train pulling up to the platform. The subway doors opened and a man extended his arm to help Claudette inside and I suddenly realized it was Vinny, and the rest of the group, we had all managed to find ourselves in the midst of this big city, on the same train, going to the same place.

An XLR cable went bad mid-interview when Annie was interviewing one of the nuns. What did that mean? No sound for the videos! My stress level went through the roof. I had no idea where to even begin looking for a new audio cable. I found a random Spaniard on the street whom I prayed would understand my broken Spanish. “Donde esta ‘electronics store?’ I tried asking. He looked at me plainly, and then in perfect English responded, “What is it you are looking for?” It turns out he was in the audio/video industry and he gave me fantastic directions to Spain’s equivalent of a Best Buy. We were able to finish the videos after that.

And there were the countless other moments of interactions with strangers, some pilgrims, some priests, some nuns, some musicians, whom we now count as friends. 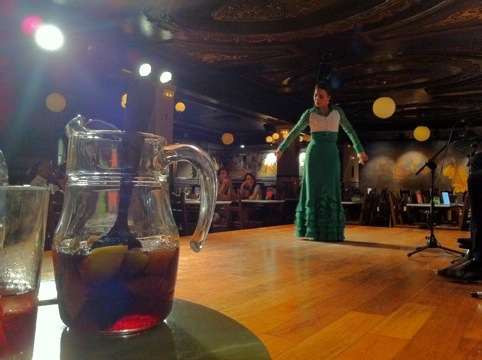 It was late in the week when Annie and I finally finished shooting, editing and uploading the final video. A weight was lifted from us, we were suddenly joyous and decided to celebrate with some sangria and flamenco dancing.

Even though I spent a good deal of time in a hotel room this week, working on these videos in an effort to share WYD with folks back home, and felt slightly disconnected from the other million pilgrims that were there, I knew I was in the right place doing the right thing, and am better for having been a part of it.

And now I am lucky enough to enjoy two weeks of vacation in Spain. And I’m sure very soon I’ll find a little Spanish church to kneel in quietly, light a candle, and say a prayer of thanks for everything God has given me these past two weeks.

Stay tuned for some vacation posts…