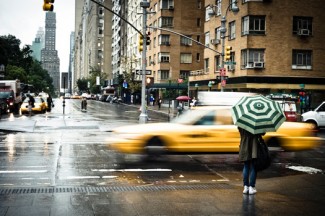 I harbor not-so-subtle feelings of dislike for nature. Because I cannot plug my hair straightener into a tree nor can I convince any surrounding wildlife to wax my eyebrows, I think nature is best left to admire. From afar. As in, I would love to look at the photos from your 40-mile hike but no, I will not be accompanying you on your next insane, nature-filled funfest. I have fossil fuels to burn through.

All this being said, I have realized that the places where I find God are not where many people find him. While I understand the immense beauty of a sunset or a waterfall, I have trouble finding spirituality in them. For me, I see God in much different places. I see him in the face of the homeless man I pass on my way to work, and on the dirty streets of New York City. I realize that my idea of beauty is vastly different from those around me. But I love crowds and concrete.

During my sophomore year of high school I went on a trip with my drama club to see The 39 Steps (which is utterly fantastic by the way) on Broadway. After giving a standing ovation, we waltzed out of the theater laughing, giddy and hungry. One forgivably naïve person in the bunch suggested that we hit up the Olive Garden in Times Square. Ever with a flair for passionate speeches, I announced that I hadn’t come to New York City to choke down mezzalunas baked in glorified nacho cheese sauce. I wanted real NYC food. So I told my small party to buckle down, because we were going to find some authentic New York grub.

We traipsed down a side street, me at the helm, like a crazed version of the Macy’s Day Parade but with way less balloons and much more hot air. Before I knew it, the initial excitement had worn off. We were starving, cranky, and without a restaurant in sight. As I led this group of disgruntled teenagers around the city in the pouring rain, I found myself thinking about Jesus. Was he ever frightened that he would let his followers down? Did he look into the faces of his weary, cold disciples and fear that he was simply asking them for too much and that they would be better off just going back home?

In the comfort of the tiniest restaurant in the city, we chatted, told jokes, and spent 20 minutes trying to figure out how to split the check. Later, on the ride home, my raggedy bunch of friends thanked me repeatedly for finding a restaurant that was truly worth the experience and for pushing them out of their comfort zones.

I grew more and more apprehensive as we turned down a road into a neighborhood that seemed more ominous than I cared to admit. Just as I began to feel defeated, we found a small Italian place tucked into a corner. If we had blinked we would have walked by it. We clomped in, wet and muddy, and threw ourselves into the nearest booth. It was simply magnificent. The place was quiet and charming, the food was fantastic, and there wasn’t a single mezzaluna to be found on the extensive menu.

Finally, in the comfort of the tiniest restaurant in the city, we found our elation again. We chatted, told jokes, and spent 20 minutes trying to figure out how to split the check. Later, on the ride home, my raggedy bunch of friends thanked me repeatedly for finding a restaurant that was truly worth the experience and for pushing them out of their comfort zones. As I accepted their thanks and hugs of gratitude, I began to realize that that was what Jesus had done. He had asked his disciples and the rest of his followers to step outside of their comfort zones and to accept love: love of God, love of others, and love of themselves.

Perhaps Jesus had moments of insecurity. He was, after all, human. But the most important thing to remember is that Jesus never gave up on humanity, even as he was hanging on the cross. Jesus said, “Father, forgive them, for they do not know what they are doing.” (Luke 23:34) We have to remember that it is OK to have self-doubt as long as we don’t let it cripple us. We have to keep on pushing and fighting for the life we want on Earth to prepare for the eternal life we will have with God.

Two years after that little adventure, I found myself on my way to New York City once again to start my freshman year of college. After two years at Fordham University, I have grown significantly from the person I was in high school. Though I still can’t resist an obscure Italian restaurant, I have fallen even more in love with this city. I see goodness everywhere I look in this beautiful mess. For me, dilapidated is magnificent, God is found in the slivers of a cracked sidewalk, and crowds and concrete will forever bring a smile to my face.