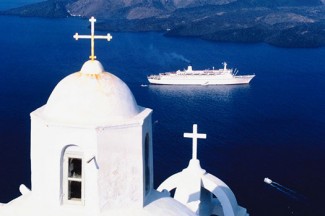 At the beginning of the summer I took a one-week cruise with my family to Bermuda. There’s nothing like it. Not only are your meals, entertainment and accommodations included in the deal; you get to see other parts of the world. Holland America Line, the cruise line we were sailing with, always has a priest on board, which meant my brother and I had the chance to go to daily Mass. Priests are scheduled through the Apostleship of the Sea, an official ministry of the Church. They enjoy free passage but act as the on-board chaplain, leading both Catholic and non-denominational services and providing the sacraments to the passengers.

It was nice to find the comfort of the ritual of Mass in the middle of the ocean. Each day Mass had about 25 people and had the feel of a typical parish daily Mass. It was like I was back home! Our cruise ended on a Sunday so the ship offered a Saturday evening vigil, which was attended by more than 100 passengers. My brother and I were asked by the priest to be Eucharistic ministers. It was a privilege for me to bring Jesus to people who still desired his presence in the Eucharist even on vacation. And a vacation doesn’t mean holiday goers need God less. Jesus was literally with us in the middle of the Atlantic Ocean. He journeyed with us from New York to Bermuda and back again. This fulfills my second favorite image of Jesus as traveler (my first is Jesus as bartender).

But there was another part to my voyage that caught me by surprise. It brought me more outward, beyond the walls of the ship. If you know me, you’ll know that I love days at sea, almost more than the ports themselves. Around the ship is nothing but ocean and sky. At first it’s a bit foreboding. Out there a lot of trust in God is needed. You hope the ship stays afloat — there’s no one around, at least not in the 12 miles visible to the horizon. You also hope the desalination system — the only supplier of fresh water — doesn’t crap out. And any solid earth is more than three miles below you.

When I looked out to the horizon in the middle of the Atlantic Ocean and all I could see was ocean and sky, the simplicity rid my rationalizing mind of all the distractions my land-faring self focuses and refocuses on, and instead, for a moment, I just felt God in that simplicity.

But this smallness that’s felt after just a brief gaze out to the waters leads me to a real feeling of the presence of God. All you can see is ocean and sky, water and air, two ‘elements’ of sorts. Even the clouds are a form of water. Perhaps this is what the earth looked like in its early stages as told in the Genesis story:

In the beginning, when God created the universe, the earth was formless and desolate. The raging ocean that covered everything was engulfed in total darkness, and the Spirit of God was moving over the water. (Genesis 1:1-2)

Soon after that God created light and the sky. At that stage — the stage I could imagine by just seeing the ocean and sky that surrounded our ship — there were no animals or human beings. All that existed was the mighty power of God pulsing through the infant creation.

As creation continued, more and more came to be, and through the centuries humankind has assisted in that creation with progress and transportation and technology. And through it all we see therapists and spiritual directors and take pills and read the Bible to make sense of all the struggles in our bodies and souls, those internal things that gnaw at us day after day. And that’s good and God is there, but when I looked out to the horizon in the middle of the Atlantic Ocean and all I could see was ocean and sky, the simplicity rid my rationalizing mind of all the distractions my land-faring self focuses and refocuses on, and instead, for a moment, I just felt God in that simplicity of only sea and sky. It gave me a glimpse of an earlier stage of Earth when I was just a thought in the mind of God. But that simple moment for me left plenty of room for me and God to just talk — without the ordinary distractions of daily life.

Can we find God in the busyness of life with all its emotions and trees and animals and buildings and jobs and cars and bills? Yes. But when you look out at two of the very first earthly creations, before humans came along — sea and sky — it puts things in perspective and you see God in a very new way.

My cruise was a chance for me to see God in the concrete touchable here and now through the Eucharist and in the grand, almost beyond-my-reach reality of raw creation. It made me realize that God can be found everywhere you look, within Church and without, in the confines of my heart and also in the expanse of the elements. Yet all of these ‘presences’ of God are sacramental, they’re real palpable things that I can see or touch or feel. It’s that sacramental reality that Catholics live for, and it surrounds us always and everywhere, even in the most remote places.