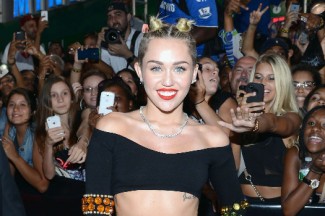 Dear Miley Cyrus (and women in their late-teens/early 20s and the me of several years ago),

Hi. It’s me. At the ripe old age of 30-something, I consider myself to be somewhat of an elder stateswoman in the realm of young adult womanhood. After the debacle that was your performance at last Sunday’s MTV VMA’s (which inundated my Facebook feed on Monday morning, which we didn’t see live because 1) we’re old and don’t watch “the MTV” and 2) we have a gaggle of little people for whom that channel is — part and parcel — utterly inappropriate), I think we need to talk. Like right now.

I know you didn’t ask for my advice. Too bad.

Listen … I get it. You want to be seen as a grown woman. Fair enough. The thing is that I’ve learned some stuff over the past decade or so that might be helpful to you. Some of this knowledge was hard won. I’m trying to give you a leg up, sister. I care about you. And, seeing as how we’re both sojourners on the road to figuring out what it means to be a woman in this world, I want to help you. I’ve been on this road longer. And, seeing as I have three little daughters just beginning their respective journeys, I have a stake in your walking it with dignity. Because, for better or worse, your journey is a public one.

So here are my two cents:

I know that you are not the only one putting forth these harmful ideas about women, but I remember seeing you on TV as a young girl. You were not so different from my girls. I fear that you don’t have good people around you who have your best interest at heart. It seems to me you could use some sisterly advice. This road you’re on is fraught with snares, detours, and pitfalls. Proceed with caution. I’m praying for you.