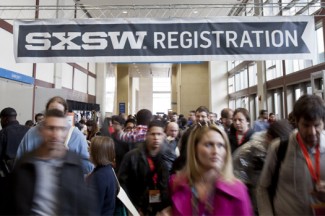 Even though I have an admitted issue with ever expanding technologies, I went to a SXSW Interactive party with Brandon last year. Instead of finding people interested in making a buck or talking about the latest microchip processor, I found people using technology for social good. I engaged in conversations about orphans in India and the difficulty of reaching teens about faith. I discussed things I didn’t think I would have with techies. I was hooked.

This year I was lucky enough to go to SXSW Interactive where I met lots of different people, I listened to lots of ideas, and I took lots of notes. If you have any preconceived image of a modern day techie, pitch it out the window. I felt pretty un-fashion-forward. Most around me had beautiful leather satchels carrying the latest and sleekest laptop with acid wash skinny jeans and thick-rimmed glasses peeking through their swooshy bangs. After I stopped ogling laptop bags, I started listening to what people had to say.

People
Even though I met lots of different people from all over the world working in many different professions, it was clear the 20- and 30-somethings were mostly coming from the same place. They’ve seen the wealth-addicted, nothing-matters-more-than-the-bottom-line professional, and they don’t like it. They’ve also watched their parents devote an entire career to one, and only one, unfulfilling job. They don’t want that either.

One speaker, Leila Janah, pointed to the space that exists between a profit maximizing business and a struggling non-profit. “What if we used a lean startup model for non-profits?” The kind of business that puts the social mission first but is also revenue-sustainable. This shift in thinking allows an organization to affect global change without having to worry about staying open year after year — it can instead focus on thriving and expanding.

She attributes her philosophy to Thomas Pogge, saying, “My job forces me to travel from a city with the highest median income in the United States to places like rural Benin and Uganda, where the average person makes less than $1.25 a day. … They literally break their backs to mine the minerals used in our electronics and stitch the clothes we wear. How is this morally permissible? Our greatest natural resource is the human capacity of the people our current economic system has written off. What propels me forward is the vision of building massive social businesses that enfranchise these bottom billions, treat them fairly, and offer them the chance to achieve their human potential.”

One of her organizations called Samasource recruits, trains, and employs women and youth in developing countries to do basic online work. The group then builds small offices equipped with computers and Internet and puts these people to work. They have partnered with major corporations. Currently they are working on a huge image-tagging project for Getty Images. They are able to maintain a steady revenue stream while also addressing the shortage of jobs and lack of living wages in developing countries.

Actual technology
Perhaps the part of SXSW Interactive that surprised me the most was the teams of people working together. There were plenty of teams made up of non-techies and tech whizzes alike. For example: a global development and human rights advocate + a sustainable building technology and community technology educator + an ex-Disney executive who wanted to use his ability to analyze data to help optimize educational efficiency.

They developed Hello Hubs, community-built and owned Internet kiosks in developing countries. The people in these small rural communities are taught how to build and maintain these kiosks. The team described one site they work at: “You drive out of the capital of that country for several miles and there is an almost unintelligible dirt road that you take for a few miles into a valley. You would have no idea that 3-5 million people live in that valley. They are barely on the map.” But with the kiosk, the community planted their digital flag. One of the first things teens did was go to Google or Yahoo and get an e-mail address. They gave themselves a name and an address in the digital world. They want to be part of the global community and the Hello Hubs innovators are working to make sure they have that opportunity.

One reason I tend to push against technology is that I’m just not that interested in it. But in group after group, I saw the blending of talents of techies and non-techies alike do really amazing work. As Cesar Chavez’s son, Paul, said in one of his talks, “My father would have definitely used Twitter had it been around back then. He would have used every available means to fight injustice.” We don’t have to understand the ins and outs of why a technology works, but we can employ it for the greater good.

Communities working together
One of the keynote speakers was Austin Kleon, who did a fantastic job using tech speak to explain why God didn’t make us for ourselves and made us to be part of a community. He defined the two kinds of people we need to avoid becoming: “vampires and human spam.”

We’re not put on this earth to hoard our technology and information. We are not made to squirrel away talent and hide our ideas. We exist in an “ecology of creativity” where taking in other people’s ideas and putting our ideas out there is a constant cycle. Working with others is vital to not only the world’s betterment, but also our own growth.

When others are working on the same project as us, it is instinct to pull back with jealousy or distrust (vampires). It is easy for us to only care about our own work and tirelessly promote ourselves (human spam). We must reject that. Instead of cutthroat competition, we should share our work with others and support cooperation. Instead of constantly throwing ourselves into the spotlight, we have to be fans of other work and watch others when the spotlight is on them. This is what it means to be in a community — a give and take among all its members.

Takeaway
While I was impressed by the social mission of entrepreneurs, creatively used technologies, the sense of community in the tech industry, and the speed at which thumbs can move when texting, I most appreciated Kleon’s closing statements. When we are at the forefront of our industries, why should we care about doing good? Why should we care about our work community, local community, or global community? “We all have to inevitably face our end,” he said. “Thinking about my end makes me want to do something decent with my life. We have to think about what we will leave behind. Do we work for the next greatest thing or do we work for the lasting thing?”

Now that’s something we can all, techies and non-techies alike, think about.