Ironically, I had started writing the article before the images of floods and disaster in my home state of New Jersey and of New York City covered the airways.
The following continues a series that will serve as the conclusion of the Kicking and Screaming blog.

In 1975, Billy Joel decided that it was time to return to New York. His time in Los Angeles had been fruitful — he released his first two albums under Columbia Records and had garnered some of his first hits, including his signature song Piano Man — so the move might have been a surprise for many. It was a dark time for the Big Apple. The city had lost much of the romanticism it had enjoyed in the previous decades, many of its urban areas were beginning to decay because of white flight, and there was real concern that New York would find itself in default. The mood of this era is probably best reflected in the infamous (and misquoted) Daily News headline, “FORD TO CITY: DROP DEAD.”

It is against this background that Billy Joel recorded his third album, Turnstiles. “If New York’s going to go down the tubes, I’m going to go back to New York.” And while the album is filled with great songs about transitions (and an enchanted reflection about a particular state of mind), it is the last song on the album that served as a response to the pessimism being heaped upon the city at the time: Miami 2017 (Seen The Lights Go Out on Broadway).  The song features a narrator describing the destruction of New York to his grandkids safely ensconced in a Miami retirement community in Miami in the year 2017. Of course, the song was fiction. And as the 70s gave way to the Wall Street 80s, which then gave way to the Seinfeld 90s, the idea of an apocalypse happening in New York felt more and more absurd.

Until one day in September 2001. Nightmares became realized and visions only before scene in disaster movies now blazed across television screens. As we also know, heroes came from everywhere and from every walk of life. And whenever the citizens of a grateful metropolis thanked the women and men of the New York Fire Department, the New York Police Department, the city government, (the list goes on), they responded that they were just “doing their job.” 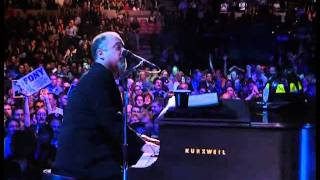 A concert was held for the people who had done their job in Madison Square Garden that was meant to serve both as an opportunity for healing and thanksgiving. Celebrities and singers came from all over to participate. When the fifth musical act came out for the evening with his fist pumped in the air, there were initial cheers … but when Billy Joel started playing the opening keys to Miami 2017 (Seen the Lights Go out on Broadway), there were many cries of “No!” The song that had once been a fictional musing had become a horrible reality and the lyrics were too much for many in the room to bear. But when Joel concluded playing the most rageful version of the song anyone had ever heard, he said, “I wrote that song 25 years ago. I thought it was going to be a science fiction song; I never thought it would really happen. But unlike the end of that song, we ain’t going anywhere!” The crowd broke out into thunderous cheers.

A little over a decade later, the city of New York had indeed not gone anywhere. Construction on the new Freedom tower was nearing completion. A sense of romance returned. People continued to do their job to make the city a better place. Many in town for the ordination from Texas remarked on the unrelenting energy that could wear away at one’s soul after a while, but they also acknowledged the romantic side that could still lead one’s heart to soar. They remarked that they had expected New Yorkers to be rude and selfish people, but then they commented on how many times they saw people stop on a dime when they saw someone in need.

Growing up in Northern New Jersey, I had loved New York City ever since I was three years old. And there was something in me that wanted to celebrate my First Mass in New York City. Because there were three of us being ordained, there was somewhat of a crowded dance card at the Paulist Mother Church, St. Paul the Apostle on the Upper West Side. But during this time, I had been watching a documentary about the life of Fr. Mychael Judge, the Franciscan Friar who had served as the chaplain for the NYFD and was the first recorded causality of 9/11. Soon after the first tower fell, they brought his body around the corner to the oldest parish in New York, St. Peter’s, and placed his body in front of the altar. A priest who had done his job.

As I wrap up the last few posts on this blog, I am acutely aware that my writings could just as easily be called “Whining and B&$@#ing” at times instead of just “Kicking and Screaming.” That a lot of the concerns I have had about priesthood focused mostly on my own well-being rather that the potential needs of the larger community. While there is validity into taking one’s own apprehensions into consideration in any discernment, over this past phase of my life I can see where mine sometimes veered into the excessive. Given my propensity to doubt, my (Irish) disposition of seeing the glass half-empty, and my habit over the past six years of staring longingly at the red lever sitting next to me labeled “EJECT,” I think that I needed a reminder that there were bigger things going on in the world than my own trepidations. On my first full day of priesthood, I think that I needed a reminder of the importance of doing your job.