Some Canadians have “made it big” down here in the United States; others have not, and wouldn’t necessarily see it that way. After all, to do good work in Canada, and to stay in Canada, does not require some further branching out or success beyond the nation’s borders to be legitimate. That is my (hopefully plain sense) perspective.

Yet here I am. And I know from several concerned questioners over the last four years that not everyone understands why I am here in the United States. From the outset of Lent I wanted to look at what is most fundamental in my life, and my being a Canadian Paulist in the US is certainly part of that category. This part of my life is even further highlighted as the Paulist Fathers prepare to leave Toronto (and thereby, Canada) at the end of this coming June. I have spoken already about how the Holy Spirit has brought me here, and that is 100% accurate. But the Spirit has worked through a lot of people, and a lot of stories—not all of this time and place. 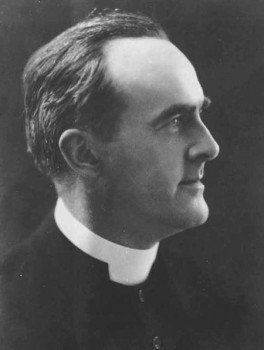 The photograph to the right is of Paulist Father John E. Burke, CSP (1881-1958). Fr. Burke was Canadian; a New Brunswicker in fact, like myself. Fr. Burke grew up in St. John. (I grew up in Fredericton, maybe an hour and half drive north.) Fr. Burke was an immensely popular priest during his time at the Paulist parish, St. Peter’s, in Toronto. Indeed he was so popular that he was the primary eulogist at the funeral of Sir Wilfrid Laurier, one of Canada’s most conciliatory, bridge-building Prime Ministers in Canadian history. How appropriate it was then for a Paulist to speak of the Prime Minister’s life and legacy.

I look at Fr. Burke’s life and legacy and I feel inspired, because like many other Canadian Paulists since the Society’s founding in 1858, Fr. Burke found whatever he needed to find within (and without) himself to answer the call to a community with deeply embedded American roots. In the novitiate especially, I began wrestling with the question of how to balance these things for myself. I have wondered whether my service within another nation’s Church somehow meant that I was turning my back on my own.

So why am I here? Like I said, the Holy Spirit. But it is also my response, and that is not nothing. I feel called to serve the universal (as in boundaryless) Church through service in this country. I hope to do some missionary work of some kind in Canada one day, but I will not be angry at God if this turns out to be limited. I do hope that Fr. Burke’s example (and even my own) could shine a light on the importance of listening to and obeying the Holy Spirit. The next move in life is not always obvious, or logical. It is not always easy either. But here I am, miles away from home, and I am the most fulfilled I have been in my life.