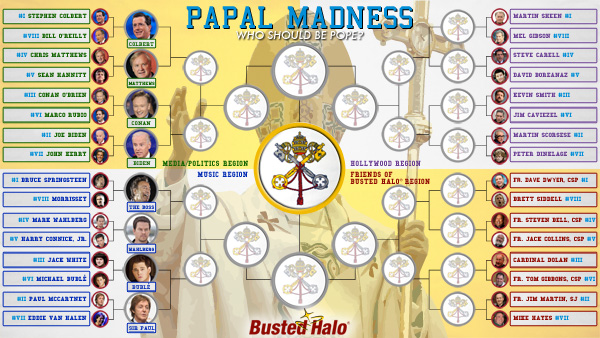 And now, Day 2 begins. Head over to our Facebook page now to vote on the Hollywood and Friends of Busted Halo® regionals (see the competitors below). If you don’t see the voting polls right away on Facebook, simply scroll down the page until you come to today’s match-ups.

In other news, we’ve heard that the folks over at Lent Madness (and some of their fans) have accused us of stealing their idea. Perhaps they’re unawares that the month of March and brackets go together like scarlet red on Cardinals? Either way, we’re big fans of brackets and wanted to give the work they’re doing teaching readers about saints a shout-out, as well as some of the other papal brackets out there. And let’s not forget the good people at Grantland, who continually produce cleverly themed brackets throughout the year.

But enough about other brackets, Papal Madness is all about you, the reader, getting the fake chance to choose a fake pope. So, go to our Facebook page to vote, and help us figure out: Who should be pope?

Martin Scorsese: One of the greatest film directors of all time, Scorsese’s Catholic faith is never far from him. Numerous Catholic themes have permeated his films and Scorsese, who once considered the priesthood, has said, “I’m a lapsed Catholic. But I am Roman Catholic — there’s no way out of it.”

Kevin Smith: Through his controversial films Dogma and Red State, writer-director Kevin Smith has explored and expressed his own Catholic faith. Discussing Dogma in 1999, Smith said, “I always wanted to do something that celebrated or validated faith for someone of my age without seeming corny or hackneyed or a bunch of baloney.”

Steve Carell: In addition to being raised Catholic and remaining devout to this day, Carell’s biggest advantage in the Papal Madness competition is playing the role of a modern-day-Noah and speaking one-on-one with God in the film Evan Almighty.

David Boreanaz: Though he’s played a blood-sucking vampire, Boreanaz is also well known for playing the very Catholic Agent Booth, in the hit TV show Bones, even stating that he is inspired by the Catholic faith of his character. As a father, Boreanaz has passed his real life faith onto his son — perhaps this is good practice for becoming the Holy Father?

Peter Dinklage: Most recently known for HBO’s Game of Thrones, Dinklage self-identifies as a “lapsed Catholic,” stating, “I think it’s healthy to be skeptical…even atheists have a certain spiritual side.”

Mel Gibson: Mel Gibson is probably one of the most famous (or infamous) Catholics in Hollywood. Directing The Passion of Christ, building his own chapel, and advocating for a traditionalist approach to Catholicism, Gibson’s faith is never difficult to notice. However, by not accepting the reforms of the Second Vatican Council, Gibson probably significantly lessens his chances in winning Papal Madness, positioned here as a No. 8 seed.

The Friends of Busted Halo® Region

Fr. Jim Martin, SJ: The author of several books, a contributing editor for America Magazine, and leading expert on the saints, Fr. Jim may best be known for his many appearances as The Colbert Report’s Chaplain, where he offers spiritual guidance and insight to fellow Papal Madness competitor, Stephen Colbert. Additionally, Fr. Jim has drafted 12 reasons expressing why he should be the next pope, (so you know he wants the job).

Fr. Steven Bell, CSP: Busted Halo®’s Fr. Steve had his closest brush with papal greatness in 2008 when he was a principal cantor at the 2008 Papal Mass in Washington D.C., and his most recent Italian encounter on the streets at the San Gennaro Festival.

Fr. Jack Collins, CSP: You won’t know jack about popedom until Fr. Jack hits the streets of Vatican City in his new papal garb, bringing his down-to-earth approach of teaching theology to the papacy.

Fr. Tom Gibbons, CSP: Possibly kicking and screaming his way to the Pope’s Throne, recently ordained priest, Fr. Tom, would bring many gifts to the papacy, including his love of Bruce Springsteen, on-camera talent, and a unique world-view which combines faith and pop-culture.

Mike Hayes: Co-founder of Busted Halo®, Mike is the author of Googling God and Loving Work, two books helping young adults connect their faith with their everyday lives — just the thing the Church needs these days.

Brett Siddell, a.k.a. “The Happy Grad”: No. 8 seed, and long shot for the Chair of St. Peter, stand-up comedian and pseudo-producer/phone-boy for The Busted Halo Show, Brett Siddell has his sights set high in this contest. For those not familiar with Brett’s work with Busted Halo®, you might best remember him as the “Happy Grad” in that winning Chevrolet Superbowl commercial.