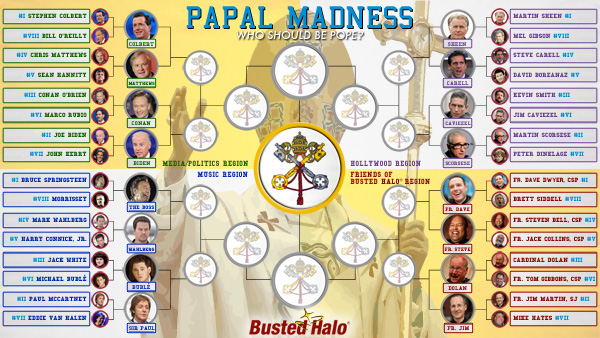 Obviously, the big papal news today is that Pope Benedict XVI is resigning at 8pm Vatican City time (2pm EST), so for a quick overview of what’s going to happen next in the real world of choosing the pope, check out our video, “How Do Catholics Elect the Pope?”.

But if you’re interested in the more fun and creative way of doing things, go vote in Day 3 of our Papal Madness bracket by selecting your favorites from the second round of contenders, “The Spiritual Sixteen”.

Yesterday’s matchups held no real surprises, as most of the top seeds from both the Hollywood and Friends of Busted Halo® regions advanced. There was a slight upset when No. 6 seed Jim Caviezel took out director Kevin Smith, but since Caviezel’s claim to fame is portraying the son of God, we probably should have seen that one coming. Despite his best efforts of rallying his readers and friends, Mike Hayes was unable to best No. 2 seed Fr. Jim Martin. The closest race was between two Paulist Fathers, as Steven Bell took on and narrowly defeated Jack Collins — looks like Fr. Collins doesn’t know Jack about advancing to Round 2. Sorry, Jack!

Today’s contests include some real dynamite head-to-heads that you’re not only going to want to vote on, but also pay close attention to throughout the day: Tournament favorite Stephen Colbert will most likely make quick work out of fellow pundit Chris Matthews, while Conan faces off against the Vice-President. The man who played Christ (Caviezel) will challenge the man who directed Christ, No. 2 seed Martin Scorsese. In Musicland, it’s the Boss vs. Marky Mark, and Sir Paul vs. Michael Bublé. And you certainly won’t want to miss everyone’s favorite Jesuit, Fr. Jim Martin, take on His Eminence, Timothy Cardinal Dolan, the man who could very well become the real new pope come the March conclave. And of course there’s another Paulist v. Paulist matchup when our very own Fr. Dave Dwyer takes on our very own Fr. Steven Bell.

Thus begins Day 3. Go to our Facebook page now to vote on the “Spiritual Sixteen”. If you don’t see the voting polls right away on Facebook, simply scroll down the page until you come to today’s match-ups.

Chris Matthews: Though Matthews has been described as a self-hating and anti-Catholic Catholic, the news host has sided with the U.S. bishops in their fight against the Obama administration’s health mandate.

Bruce Springsteen: No. 1 seed in the Music Region and hailed as the greatest Catholic poet of our time, the Boss could bring a creative new perspective to the papacy. Isn’t it time for the Church to get rocking again?

Michael Bublé: Canadian heartthrob, Bublé, could bring an appreciation for the ineffability of God to his role as pope, having told reporters “I have a relationship with that one thing. The universe. God.”

Martin Scorsese: One of the greatest film directors of all time, Scorsese’s Catholic faith is never far from him. Numerous Catholic themes have permeated his films and Scorsese, who once considered the priesthood, has said, “I’m a lapsed Catholic. But I am Roman Catholic — there’s no way out of it.”

Steve Carell: In addition to being raised Catholic and remaining devout to this day, Carell’s biggest advantage in the Papal Madness competition is playing the role of a modern-day-Noah and speaking one-on-one with God in the film Evan Almighty.

Fr. Jim Martin, SJ: The author of several books, a contributing editor for America Magazine, and leading expert on the saints, Fr. Jim may best be known for his many appearances as The Colbert Report’s Chaplain, where he offers spiritual guidance and insight to fellow Papal Madness competitor, Stephen Colbert. Additionally, Fr. Jim has drafted 12 reasons expressing why he should be the next pope, (so you know he wants the job).

Fr. Steven Bell, CSP: Busted Halo®’s Fr. Steve had his closest brush with papal greatness in 2008 when he was a principal cantor at the 2008 Papal Mass in Washington D.C., and his most recent Italian encounter on the streets at the San Gennaro Festival.