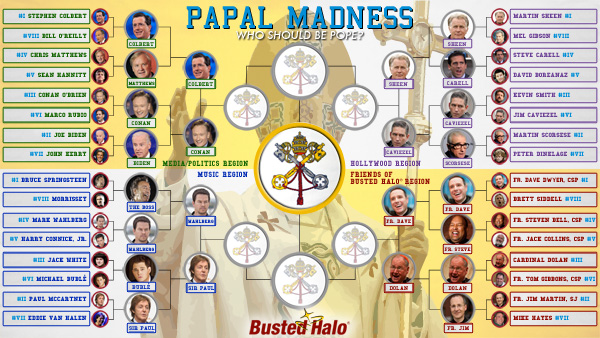 Stephen Colbert absolutely obliterated MSNBC’s Chris Matthews during yesterday’s “Spiritual Sixteen,” with Matthews only getting 4.3% of the total vote — the biggest deficit Papal Madness has seen to date. Upsets of the day included actor Jim Caviezel prevailing over director Martin Scorsese, and the surprising win of Mark Wahlberg over Bruce Springsteen. (How did that happen?!!!) Jesuit fans out there will be sad to say goodbye to Fr. Jim Martin, SJ, who lost to none other than His Eminence, Timothy Cardinal Dolan.

If you haven’t already, head over to our Facebook page to vote on the “Ecclesiastical Eight.”

Today’s matchups leave nothing to be desired: Two of the most Catholic actors in Hollywood face-off when No. 1 seed Martin Sheen takes on No. 6 Jim Caviezel. In the Media/Politics region, No. 1 Stephen Colbert goes head-to-head with fellow comedian Conan O’Brien, and No. 2 seed in the Music region, Sir Paul McCartney, confronts surprising 3rd rounder, No. 4 Mark Wahlberg. Meanwhile in the Friends of Busted Halo® region, things may turn anything but friendly as Busted Halo’s® own Fr. Dave Dwyer, CSP, meets up with the man who could (actually) be pope, Cardinal Dolan.

And we begin Day 4. These are some great matchups and they will be going on all weekend. So go get your friends, family members, and anyone else who is interested in the fake chance to elect the pope, and have them visit our Facebook page to vote on who to send to the Final Four of Papal Madness. If you don’t see the voting polls right away on Facebook, simply scroll down the page until you come to today’s match-ups.