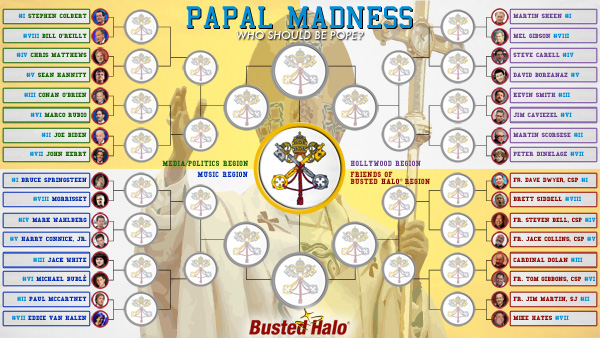 Well, it’s that time of the century, where the election of a new pope coincides with March’s NCAA basketball tournament. The cardinals will soon gather for the papal conclave in Rome, most likely to choose someone from within their own ranks to succeed Pope Benedict XVI. However, there’s always the remote chance they look outside of the College of Cardinals for a successor — because technically you don’t have to be a cardinal, bishop or even a priest to be elected pope. Any baptized, single, male Catholic can be chosen, who would then need to be ordained a priest and then ordained a bishop in order to accept his new title as Bishop of Rome.

With that we present you the chance to help select the next pope with Busted Halo’s® Papal Madness, a bracket contest of baptized Catholics, who are all technically eligible to take up the chair of St. Peter (except, in some cases, for that whole being single part…oh well). It’s up to you to help us figure out which of these would make the best papal candidate. Feel free to base your votes on their apparent spirituality (or lack thereof), guidance from the Holy Spirit, or just plain whoever you like better.

So, head over to our Facebook page to vote, and help us figure out: who should be pope?

Chris Matthews: Though Matthews has been described as a self-hating and anti-Catholic Catholic, the news host has sided with the U.S. bishops in their fight against the Obama administration’s health mandate.

Sean Hannity: Hannity identifies as Catholic, though he has been called a “heretic” because of some differing views with the Church.

Marco Rubio: Though his family began attending the Mormon Church, Rubio always felt a strong connection with the Roman Catholic church and went back to Catholicism when he was a teenager.

John Kerry: A former altar boy, the newly appointed Secretary of State is a well-known Catholic, though many times has been called a “cafeteria Catholic.”

Bill O’Reilly: O’Reilly is a practicing Catholic who is often disappointed by his Church. Even though he has criticized Church leaders, he has written that the Church is “Jesus and his followers, the folks who sit in the pews on Sunday. And that’s good enough for me.” Perhaps it’s time for him to be the leader?

Bruce Springsteen: No. 1 seed in the Music Region and hailed as the greatest Catholic poet of our time, the Boss could bring a creative new perspective to the papacy. Isn’t it time for the Church to get rocking again?

Jack White: Some say White bested fellow Papal Madness competitor Stephen Colbert during their January 2011 Catholic Showdown, but does he have what it takes to make it all the way to the big chair? His affinity for “St. Sebastian, the patron saint of endurance, and St. Rita, the patron saint of the impossible” makes it seem he may be ready for the long fight to the top.

Harry Connick, Jr: Jazz pianist and actor, Connick, Jr., is known to be humble but committed to his Catholic faith. Saint Peter’s could be getting a new pope and pianist all in one.

Michael Bublé: Canadian heartthrob, Bublé, could bring an appreciation for the ineffability of God to his role as pope, having told reporters “I have a relationship with that one thing. The universe. God.”

Eddie Van Halen: If openness to the will of God is central to being a good pope, Van Halen could easily make the short list having said “I just believe that when you play long enough you’re able to execute with your fingers, whatever God gives you…” Just imagine, a divinely inspired guitar solo in the middle of a papal homily.

Morrissey: Although he’s said his share of negative things about the Church (thus, seeding him No. 8 here), the singer/songwriter has said that he is “becoming increasingly more Catholic” these past few years. Morrissey could bring a strong sense of social justice to the papacy with his commitment to vegetarianism and animal rights.