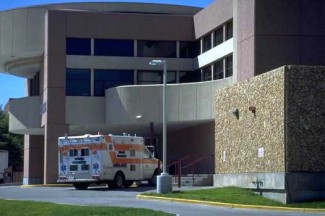 This is a call to action. Catholic institutions, I’m talking to you.

January 1, 2006, 31-year-old Lori Stodghill was admitted to the emergency room at St. Thomas More Hospital in Cañon City, Colorado. She was complaining of nausea, vomiting, and shortness of breath. Lori Stodghill was seven months pregnant with twin boys. As she was being wheeled into an exam room, she lost consciousness. ER staff desperately attempted to page her obstetrician. He never answered. She passed away a mere hour after arriving at the emergency room. The Stodghill twins died in their mother’s womb. It was later discovered that Lori Stodghill had suffered a pulmonary embolism.

Jeremy Stodghill lost his wife and two children that New Year’s Day. Believing that an emergency C-section could have saved the lives of his unborn sons, he filed a Wrongful Death Suit. Lawyers for Catholic Health Initiatives, the hospital group that owns St. Thomas More, argued that the claims relating to the twins must be dismissed because unborn children cannot legally be defined as persons and, therefore, they have no legal status. The trial court agreed and dismissed the claims. Mr. Stodghill has appealed to the Colorado Supreme Court. To date, he is still waiting to hear if the state’s highest court will hear his case.

Public outcry caused Colorado’s bishops to review the case. Under their guidance, Catholic Health Initiatives released a statement concluding that it was “morally wrong” for the defense to appeal to what the Church considers to be an immoral law … a law that understands personhood to begin at birth. They stated that while what the defense did was completely legally correct, it was not in line with Catholic teaching. No personal apology has been offered to Jeremy Stodghill for Catholic Health Initiative’s availing itself of a defense that demeaned the human dignity of his unborn children. No condolences have been offered — not by the hospital group or the bishops — to Jeremy Stodghill for the tragic loss of his wife and twin sons.

This is a call to action. Allow me to offer an example — an infinitely less tragic example –from my own experience:

From 2008-2012, our family resided in suburban Washington, D.C., so my husband could complete his PhD at the Catholic University of America. During the course of his program, CUA elected to drop insurance coverage for spouses and dependents of graduate students. (This termination of coverage occurred well before the HHS mandate — the government directive requiring employers to offer health insurance to their employees, including family planning services.) Many families in our tight knit community of Catholic families lost their medical coverage. Many of the mothers (some of whom were pregnant) and children in our weekly play group were suddenly without insurance. Many of them had to enroll in government-sponsored health insurance programs. Concerned graduate students approached CUA administration reminding them of the university’s commitment to children and families as a Catholic institution bound to promote the pro-life position of the Church. They were told that the decision had nothing to do with morals and everything to do with the bottom line.

The Catholic University of America, annual host and sponsor of the National March for Life, went on to join a lawsuit against the Federal government regarding the HHS mandate’s requirement that the university tarnish its pro-life values by providing insurance coverage for birth control and sterilization. CUA is suing the same government that stepped in to provide health insurance to pregnant women and children it dropped from its own plan (again, not because of the mandate … because they wanted to save a buck) for requiring it to compromise its pro-life position.

Let’s allow the irony to steep a moment, shall we?

Catholic institutions — hospitals, schools, universities, social service agencies — this is a call to action. This is a call to participate in the sacrifice that individual Catholics are called by Mother Church to make every day. In pursuit of a life that respects the dignity of all persons (disabled persons, poor persons, immigrant persons, sick persons, persons under the yoke of discrimination and oppression of all sorts) from conception to natural death, we make sacrifices. Parents make sacrifices to welcome new children into the world. Children make sacrifices to provide the best care possible for aging parents. Families make sacrifices to welcome special needs children into their lives and to commit themselves to their flourishing. Catholics from all walks of life make sacrifices to be able to support charities that seek to protect the poor, exploited, and vulnerable. Catholic institutions, this is a call to transform your pro-life identity from simply a line in your mission statement to something that permeates the way you act toward your employees, the individuals and communities you serve, and the greater world in which your institution participates. Many of you do this excellently. Many of you need to change.

So, Catholic institutions, this Lent I invite you to join the rest of us. I invite you to make sacrifices. Just as my husband and I will sit at our big dining room table to decide what sacrifices we need to make as a family to welcome our fourth little one this summer, I invite you to gather around the big table in your boardroom to decide what sacrifices you need to make to welcome justice and compassion (the big kind — the kind that doesn’t fit neatly into an Excel spreadsheet) into your institution, at every level. Lent is the perfect time to make it right — to start over. This is a call to action. Stop being pro-life only when you can afford it. You are the only face of the Catholic Church some people will ever encounter.