The streets of Marrakech, Morocco are the craziest I have ever walked and thank God I was able to do so in the company of friends and not alone. I flew in on Tuesday, my buddy Brendan and his wife Sarah meeting me at the airport. From there we took a cab into the old part of the city and began walking around and around, searching the confusing streets for our hotel. If my taxi into Lisbon had been a wake-up call, then this lost wandering was certainly, as Brendan termed, an absolute punch in the face. Motorcycles  (literally hundreds of them) zipped past us in both directions as we hugged the sides of buildings lining the very narrow streets. We dodged them as well as we could along with bicycles, children, cats, dogs, carts, and merchants hawking all manner of foods, trinkets and things.

Finally, and only with the help of a young boy leading us down a few narrow and darkened allies we never would have ventured ourselves, we found our riad. We were welcomed in by the owner, a lovely ex-pat from Italy, who made us tea and got us settled. I exhaled deeply.

Later, after some rest, we braved the streets again, hitting the square where we ran into a multitude of people and things. There were snake charmers and monkeys, (my Indiana Jones radar was on full alert;) men and boys wearing fezzes and plenty of hooded robes, (yes, my Star Wars radar was on full alert as well;) and women draped in their hijabs, some head to toe where you could see only their eyes, some with just the head covering, and some not wearing it at all, opting for pants and shirts and dresses instead — apparently Morocco is one of the more liberal Muslim countries unlike some which prohibit women from going outside without full body covering.

The streets of Marrakech were alive to us and completely overwhelming.

Morocco, though not my first African country to visit, is definitely my first Arab and Muslim country. As we walked those streets, I felt an old familiar feeling rising within that I hadn’t really felt since Peace Corps – utter and complete culture shock.

The streets were so different than anything I’m used to, and they were making me a little homesick, even for Madrid, a place I’d only spent a week in. And to heighten the cultural experience, it turned out it was the last two days of Ramadan, the Islamic equivalent of Lent.

Ramadan is the Muslim month of fasting and prayer. And it seemed pretty intense to me. At one point during our site-seeing, I peeked into a mosque thinking I could catch a glimpse of the men inside praying. Wait, they’re just laying down in there in the shade, I said aloud. Of course, responded Brendan who had spent the previous year in an Islamic country. You would be too if you weren’t eating or drinking water all day long in this heat.

According to Islamic law regarding Ramadan, any Muslim of able body excluding the very young, very old, or very sick is required to completely fast from food and drink, as well as smoking and sex during the daylight hours of the month. Now, in my last few fairly Catholic years, I’ve given up an assortment of things for Lent, and fasted on Ash Wednesday and Good Friday, but never gone without food and water like this. I find it very respectable.

Like Lent, the purpose behind the fasting is to encourage self-control, sacrifice and empathy, and to focus one’s mind more on God and less on the worldly world. Something I wish I could do more of in my own life.

The month culminates on Eid Al-Fitr, the final day of Ramadan, and the setting sun indicates that the fasting is over. On this night Muslims dress their best, make a great feast and basically throw a great party, saying “Eid Mubarak” to one another which basically means, Happy End of Fasting.

The night began with the three of us atop the roof of our riad, watching the sunset. As the sun disappeared, we heard the call to prayer, calling from the speakers on top of all the city’ mosques. Joining this, we soon heard the cheering from the streets.  The fast had ended.  The celebrating could begin.  We continued watching the sky. The crescent moon, visible now, was drifting slowly beneath the horizon and one by one the stars popped out of the sky revealing to us a greater mystery than we would ever know.

We walked the streets that night and I began thinking, as we weaved in and out of swarms of people cheering and singing, how funny it was that two weeks prior I had been surrounded by Catholics doing the exact same thing at World Youth Day. In many ways it was very similar. Young Muslims gathering in groups, singing songs from their culture, bound to each other by a shared tradition and faith. It is beautiful really.

Like I’ve written before, crowds singing aren’t necessarily my thing. That being said, there was something nice going on in the streets that we encountered. Despite there being more people out than we had seen in our previous outings, it was calmer somehow. Circles of music and dancing were found everywhere within the square, and everyone’s mood was generally festive.

Perhaps a bit of the craziness we had felt on the streets the past two days was just the natural pent up tension that happens near the end of a twenty-nine day fast. I know I’m pretty high strung at the end of Lent each year.

We continued walking, deciding to celebrate in our own little way. We found a hotel, one of those big, elegant places that overcharge tourists, and sat in the piano bar. We could still hear the feint sounds of the celebration outside, or maybe it was just in our heads now, the crowds having rubbed off on us. Brendan and I toasted Casablanca beers, saying Eid Mubarak to one another. Perhaps it wasn’t the most appropriate way of celebrating the end of Ramadan (devout Muslims do not drink alcohol,) but it was the best this Catholic and atheist were going to do that night. 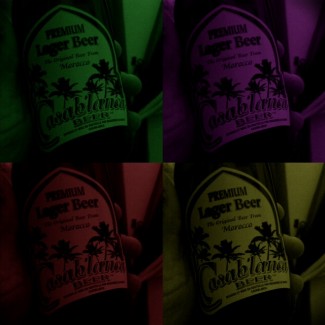