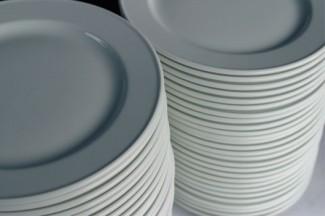 The other day, as I helped a client organize her office, we got to talking about the difference between scarcity thinking and abundance thinking.

“Scarcity thinkers believe things are in short supply. They hold on to what they have and acquire more when they have a chance — whether they need it or not.” I picked up yet another bag filled with office supplies and added them to her growing stockpile.

“Abundance thinkers, however, believe theirs is a world of plenty — whatever they need will come to them when they need it. Or, in this day and age, can be bought 24/7 online and delivered to their door. These are the folks who only buy what they need when they need it.”

“I’m definitely a scarcity thinker,” she said, feeling a little bad about it. I assured her that it’s not necessarily a bad thing. My father is a scarcity thinker. It was a good mindset to have when grocery shopping for his family of seven. If an item was on sale, he bought a case of it. Who knew when cranberry sauce would be on sale again? The Great Depression created many scarcity thinkers — people held on to whatever they had as there really wasn’t any evidence that life would provide anytime soon.

“How can I think more abundantly?” she asked as she handed me a box of old checks to be shredded.

“Start looking for evidence of it. Watch as things you need come into your life just by you putting the intention out there.”

The following week we started organizing her kitchen. She opened a cabinet and began pulling out her dishes.

“You’re moving soon, aren’t you?” she asked me. I confirmed that I was.

“Do you need a set of dishes? I just ordered a new set and don’t need these anymore.” I thought about it for a minute. When I moved to Asheville six months ago, I moved into a space whose kitchen is completely equipped, thanks to my housemates. I do own dishes, but they’re in New York and I’m in North Carolina. I won’t be back in New York until May, so yes, I told her, I will indeed need some dishes in the interim.

“And when you get yours, just pass these on to someone else who needs them,” she told me. I loved the idea of paying it forward.

“You know,” I said, “this is another example of abundance thinking. At some point I would have realized I needed some dishes, and here they are dropped in my lap.” She looked at me a bit stunned. I couldn’t have planned it better.

“This happens to me all the time,” I said. “It happens to you, too. You probably just haven’t noticed it.”

In this Lenten season — when many people choose to give something up for 40 days — why not also take the time to recognize all that comes to us just when we need it? Whether a compliment on a day you’re feeling not so good, a chocolate from a friend at the moment you were wishing for an energy boost, or a set of dishes just when you realized you might need some soon.

Are you a scarcity thinker or an abundance thinker? Start looking for examples of abundance in your life. What things come to you seemingly “just when you need them”?