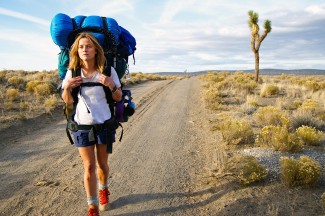 In India, there are men called sadhus, which translates as “good men” or “holy men.” They are commonly recognized by their chalky white faces, the result of smeared cremation ashes, as some sadhus attend their own “funeral” once they take on the path of a sadhu. These men are considered dead to the present world and spend their time burning off karma by engaging in spiritual practices like yoga and meditation. Some push their bodies to the extreme, standing on one leg or raising one arm for years — to overcome the limitations of the body as a way of breaking into new spiritual realms.

The idea of pushing the body in order to attain spiritual wisdom is common in all cultures and religions; millions of people across the globe participate in pilgrimages as a way of reaching a deeper understanding of the world, God, and themselves. The movie Wild, starring Reese Witherspoon, is the story of one such pilgrimage. Though it purports to carry no specific religious tie or purpose, anyone who has been on a pilgrimage can relate to many of its themes.

The movie tells the story of real-life author Cheryl Strayed, played by Witherspoon, who, after losing her mother and experiencing divorce, sets out to hike the Pacific Crest Trail, one of the most strenuous trails in the United States and far tougher than most people’s idea of camping. Strayed, admittedly not a hiker or at least not a prepared one, weaves a tale of torture and triumph — from the elements to outright danger to the characters she meets along the way. Strayed is haunted by her past: her mother’s troubled marriage and eventual death; her own divorce; and a period of drug use, promiscuity and prostitution. Witherspoon, in arguably her best role to date, superbly presents the irony of the onerous hike: sometimes it’s unclear whether it’s the hike or dealing with her past that’s the greater challenge.

I remember thinking, while watching Witherspoon simply attempt to put on her hiking pack in the hotel room: I might have given up then. But on a journey of purpose you don’t give up, though there seems to be every reason to.

The same is true of a religious pilgrimage, an outward expression of our own journey toward greater truth of God or ourselves. Perhaps pilgrimages are so attractive because we, like the sadhus, recognize that pushing our bodies to the extreme can help push our spirits, as well. I remember thinking, while watching Witherspoon simply attempt to put on her hiking pack in the hotel room: I might have given up then. But on a journey of purpose you don’t give up, though there seems to be every reason to. When our body is exhausted and stretched to its limits, our mind more easily breaks through — flooding us with moments and memories we have otherwise ignored or suppressed. A true journey causes us to confront these, whether we are ready for them or not. Along the way, we come to know the new limits of our body, and hopefully, the new thresholds of our spirit.

Perhaps another reason that pilgrimages are so appealing is that often they are done in solitude. We begin to wrestle with our past because we are finally away from the sounds of the modern world — there are no distractions to hide behind. The sadhus know this, too. In order to gain deeper spiritual understanding, we must be dead to this world. This is quite evident in Wild, as Strayed goes on for days without seeing a fellow hiker in some of the most remote areas in the United States.

I loved Wild. When I saw it, I related a lot to Strayed: I have lost my father; a relationship ended just months before; and I have found myself on a journey I would never have imagined. As tears ran down my face in the closing scenes, I realized that I, too, craved what Strayed sought: the chance to get away for a while and experience the formative power of a journey; moving onward — beginning as my old self and emerging as something new and yet unknown.

The movie has stuck with me for many months, as good movies so often do. In fact, it’s part of the reason I have finally decided to make good on a promise I made to myself back in 2006: to hike the Camino, gifting the experience to myself for my 30th birthday. Part of it is turning 30, part of it is the recent events of my life, and part of it is seeing Wild. I suspect everyone who goes on a pilgrimage seems to know the moment when it comes, without knowing the road that lies ahead. Like Stayed and the millions of people who go on a pilgrimage, I hope to be forever changed. It’s time to have a Wild adventure of my own.