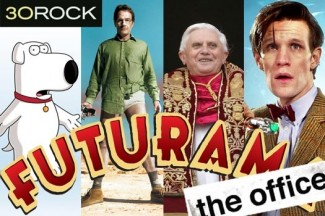 As the year draws to a close let’s take a look back over the events of 2013 and remember the things that we have lost over the past 12 months (some for the better). Whether they left us cheering or jeering, here are 13 “endings” from 2013. What would you add to the list?

Breaking Bad — After five seasons watching the exploits (and tragic downward spiral) of chemistry teacher turned meth dealer Walter White, fans of AMC’s Breaking Bad finally got to see how the story ends. Though we had to bid Walter White and Jesse Pinkman goodbye when the final episode aired September 29, there is some good news for Breaking Bad addicts: AMC is moving forward with a spin-off series, Better Call Saul, based on lawyer Saul Goodman from the hit show.

Blockbuster Video — Though some of us may have still owed them a few bucks, Blockbuster Video finally closed its doors for good, ending the company’s almost 20-year run. “Good riddance!” some might say. Appropriately enough, the last film rented from a Blockbuster was this past summer’s This Is the End, somewhat ironic considering the potential death of…

The Blockbuster — No, I’m not repeating myself. What I’m talking about is the fact that, regrettably, the big-budget movies of 2013 failed to thrill, at least commercially. Particularly in the summer — the season when major releases typically thrive — they failed to stack up to independent titles. Is this just an anomaly, or could we be witnessing a greater shift in cinema audiences’ tastes?

Hand-drawn Animation at Disney — While it might make a comeback, The Walt Disney Company revealed earlier this year that there are no hand-drawn animated films in development, nor are there plans for any. This certainly doesn’t bode well for animation fans, but perhaps the success of Disney’s new computer-animated film Frozen proves that there can still be animated magic outside of the hand-drawn format.

Matt Smith as “The Doctor” — Sadly, we’ve seen the last of the Eleventh Doctor on the BBC’s Doctor Who. It was revealed in August that Peter Capaldi would be replacing Smith at the end of the year, and the recent Christmas special has proven to be Smith’s last “Geronimo!” with the character. With the transition from the youngest actor to play the Doctor to the oldest, fans of the show are surely in for some fun when the series returns in 2014.

Brian Griffin — While we’re on the subject of death and time travel, it’s only fitting to remember Family Guy’s Brian Griffin, whom audiences were shocked to see pass away in November. Though Stewie was able to save his friend in the December 15 episode and teach us all an important lesson, for a while at least, it was RIP Brian.

Cancelled — We bid farewell to some long-running hits this year in the world of TV, like America’s Most Wanted, 30 Rock and The Office, as well as recent classic Futurama (which finally actually ended as opposed to being cancelled and picked up on another network as it has in the past.) Also, Jersey Shore is dead and buried, though unfortunately its spawn Snooki & JWoww still crawls on.

My Chemical Romance — In March, after 12 years performing together, pop punk group My Chemical Romance split up. Lead singer Gerard Way explained the break was not a result of any differences or hard feelings among the band members, but simply a change in their feelings (particularly his) about continuing to perform in the band.

Seventh Generation Gaming Consoles — In a bit of news that was almost inescapable this fall, especially around Black Friday, both Sony and Microsoft released a new console this year, the Playstation 4 and Xbox One, respectively. The addition of these two to Nintendo’s already released Wii U brings about the complete shift to the “Eighth Generation” of video game consoles. (For those interested, the console “generations” trace back to the release of the first video game console connected to a television set, 1972’s Magnavox Odyssey.)

Willis Tower: Tallest Building in United States — Having overtaken the Empire State Building last year, One World Trade Center (or the Freedom Tower) outdid Chicago’s Willis Tower by about 300 feet this November, and the Council on Tall Buildings and Urban Habitat ruled it the tallest in the United States.

Chemical Weapons in Syria — Though Syria has put an end to chemical weapon production facilities, we must not forget about the nation simply because it slips from the headlines, especially in light of death tolls of around 115,000 and rising (almost 10% of which are children). Rather, let us pray and work for an end to this tragic conflict, and for peace not only in the Middle East but throughout the world.

The World as We Know It — Not literally, of course. Obviously the world hasn’t ended, no matter what the movies may have you believe. However, the world definitely has changed, and our perception of the universe has shifted more in 2013 than it has for a long time. A team analyzing the observations of the Kepler Space Telescope found more than 100 potentially habitable planets in our galaxy alone. Knowledge of such planets is mind-blowing on its own, but that’s not the only major space exploration we’ve seen this year: on top of that, satellite Voyager 1 became the first probe to exit our solar system. With new information about our universal neighborhood, who knows what discoveries lie in store for us?

Pope (Emeritus) Benedict — In February, Pope Benedict XVI announced his resignation, something that no Pope had done for nearly 600 years. This, of course, led to a papal conclave, which selected our new pontiff: Pope Francis. The first Jesuit pope has certainly made his place in history, and continues to amaze us all with his words and actions. Moving into 2014 and beyond, we pray that he has plenty of good news and leadership ahead.