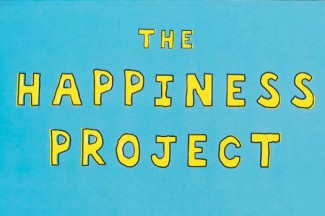 Recently, I stumbled across something called The Happiness Project. I discovered it as I poked around Heather King’s blog “Shirt of Flame” one day. Heather is a Catholic convert (like me), former “barfly” (unlike me), and a contemplative who is passionate about her faith and writing. Gretchen, the woman who wrote The Happiness Project, discovered Heather’s blog, was fascinated, and shot some questions to her about happiness.

I began to feel uncomfortable as I read further, muttering things like, “White people’s problems,” and other critical labels. Suddenly I remembered one of Woody Allen’s early films when he is making love to some woman and at the end, sighs and proudly announces, “I didn’t have to look at the manual once!”

I think worrying about happiness — whether we are, whether we’ve lost it, whether we had a greater amount of it a week, month or a year ago — is soul-destroying, like looking at the manual while making love to our dear one. In a recent Gospel reading from Luke 9: 57-62, Jesus asks a man to “Follow me.” But the hapless dude answers, “Lord, let me go first and bury my father.” “Let the dead bury the dead,” Jesus answers in his typical pithy, slap-upside-the-head manner. If you had been there, wouldn’t you have dropped to your knees, kissed his feet, then risen to follow Him, saying, “The heck with that chicken casserole in the oven, forget repairing the roof, I’m outta here!” And you’d go. Because when God calls, you answer.

We can’t keep assessing our inner emotional state asking, “What d’ya think? Good enough for ya?” This is the way to ruin. This is the way to self-involvement, which I think is the ragged path to separation from God. This used to be called “sin” in the old days, and still is in some churches.

I think happiness is a bit like this Gospel lesson, which, to me, is about keeping our eyes on the prize. Not being waylaid by inconsequential stuff. I deeply believe that worrying about happiness, quantifying it, writing books about it, making projects based on it, then having small discussion groups to assess one’s happiness is taking our eyes off the prize. God. Her call to us. Our mission in the world. Which is not to focus on our individual happiness.

Mind you, I’m not against happiness. But this feels like white people’s problems or concerns. If we’ve got enough to eat, a few faithful friends, a house, someone to share a cup of tea with, or a glass of wine, a dog to pet, something to look at out the window that doesn’t consist of disaster or mayhem, a faith community to belong to — how is that not happiness? Then throw in God as being the groundwork holding up all of the above, and that says it all.

We can’t keep looking sideways to see how we’re doing, if we’re happy enough. We can’t keep assessing our inner emotional state asking, “What d’ya think? Good enough for ya?” This is the way to ruin. This is the way to self-involvement, which I think is the ragged path to separation from God. This used to be called “sin” in the old days, and still is in some churches. Or, as the wonderful Richard Rohr said about love, “The flow is either outward or it is inward.”

I think happiness comes when we are not looking, like a lunar moth landing suddenly on my statue of St. Francis, a green benediction completely unlooked-for and unexpected. But I don’t think it can be worked for, looked for or planned on, because it is like grace — unbidden and freely given.

That’s my take on it, anyway. One more image: When I was a girl, I played the violin — mostly not very well, but occasionally well. I remember the sheer delight of getting a note right when my finger was where it should be and the bow was where it should be. If I lifted my finger slightly so the note was an octave above, the harmonic shivered in the air like a call from a silver bird. That is what happiness is to me, and it defies description and begs not to be understood or even thought about. And if we keep our eyes on God and being a door for His love to flow out into the world, I deeply believe happiness will be our lot. It’s just that we won’t even notice it because we will be too busy loving God’s creation, making soup for the hungry, driving clothes to Good Will, and singing in the choir.