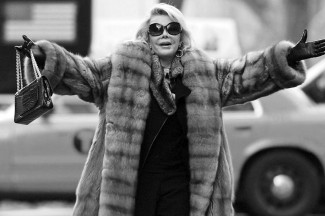 For a long time, Joan Rivers made me uncomfortable.

As a generally polite, social rule-abider who tends to be overly concerned about what others think, I had a hard time connecting with Rivers’ comedy. Yes, she was funny, but I found many of her jokes a little too offensive, her red-carpet fashion quips a little too mean, her outspokenness a little too irritating. Frankly, I just didn’t get it.

My perception shifted one day in 2011 when I happened to briefly meet Rivers. I was working as a production assistant on The Martha Stewart Show, running around backstage like a good little minion, alternately preparing cue cards and cappuccinos for guests. She came around a corner on the way to her dressing room, looking majestic in a larger-than-life floor length fur coat and oversized glasses, flanked by handlers.

We had several segments scheduled for that day, including a cooking demo featuring one mom who had started a successful allergen-free bakery. She was in a nearby dressing room with her young son, who was probably no older than 7 or 8. The young boy saw Rivers walk by, and immediately became visibly excited by the close proximity of a celebrity. Rivers, who noticed the boy’s reaction (or perhaps, heard his proclamation of “Omygodthat’sJoanRivers!”), brushed her handlers aside and walked over to the boy. Together, they sat in the green room for 15 minutes, while Rivers asked the boy all about school, his family, and even about living with food allergies. She signed autographs, took photos, gave him hilariously questionable life advice, and hugged him goodbye. She said hello to every single person who crossed her path backstage. I was floored by her kindness and energy. Underneath the comically large fur coat and glasses was the real person behind the persona.

Rivers comforted those who needed an escape, who needed a reality check, or who just needed the permission to laugh in the face of something plaguing them, whether “acceptable” or not, in order to render it powerless.

In that moment, it became clear to me that, for the amount of discomfort Rivers could cause — political incorrectness, eagerness to challenge, and her commitment to not apologizing — she was also a great comforter. I saw it in the face of that 8-year-old boy, glowing with glee in realization of the special moment he’d just shared. She comforted those who needed an escape, who needed a reality check, or who just needed the permission to laugh in the face of something plaguing them, whether “acceptable” or not, in order to render it powerless.

Shortly after her death, I watched A Piece of Work, the 2010 documentary following Rivers’ life and career. The most memorable moment of the film comes during a standup bit when a heckler lambasts Rivers for telling a Helen Keller joke. She could have backed down, but instead she fires right back saying (in the abbreviated, PG version): Comedy is to make everybody laugh at and deal with everything, you idiot. If we didn’t laugh, where the hell would we all be? Think about that.

If we didn’t laugh, where would we be? Laughter is one of the biggest comforts I know, so it’s impossible, and scary, to try to answer that question. Looking back on Rivers’ amazing career, I’m thankful to Joan for lightening the weight of the world with humor, and for making me a lot more apt to laugh at myself. As Esquire’s Paul Schrodt so eloquently reflected after her death, “Rivers believed powerfully in comedy’s ability to help us resolve, or at least deal with, those subjects that make us most uncomfortable.” What comfort lies in that!