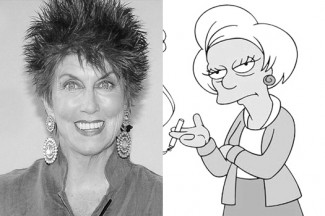 “I’m no beauty. I’m no genius. I can’t sing. I can’t dance,” Marcia Wallace said years ago at a speaking engagement in Indiana, “But, it was clear to me early on that I had a couple of things that have held me in very good stead as I have approached life’s challenges, that is tenacity… and a sense of humor.”

Bellowing that unforgettable “Ha!” trademarked in both of her major character roles, this self-possessed, big-haired and big-eyed wag proudly sprung from Creston, Iowa, taught us to believe in the healing and motivating power of laughter.

She celebrated an enduring career in television that spanned more than 60 years and bravely crossed genre lines. She became a household name as Bob Newhart’s forthright and sardonic receptionist, Carol Kester, scoring another hit in a long line of women who could both foster and demonstrate strength through humor. I remember her as a regular on 80s game shows, which, at the time, provided more talk show style entertainment than outright competition. She was always prepared with a zinger!

In 1990, she was cast as fourth grade teacher Edna Krabappel on The Simpsons, which garnered her an Emmy Award. Upon seeing the first episode featuring Ms. Krabappel (the one where Bart cheats on a test and is considered a genius), I immediately knew that it was Marcia Wallace! It was only partially because of the voice; mainly because of the personality of the character. Wallace had a knack of playing these hilarious yet poignant, irreverent yet assured, self-confident yet vulnerable, unapologetically love-starved, robustly resilient women who, in every episode, made it clear that though something is clearly missing in their lives, they’re resolutely moving forward on their journey toward wholeness.

Wallace had a knack of playing these hilarious yet poignant, irreverent yet assured, self-confident yet vulnerable, unapologetically love-starved, robustly resilient women who, in every episode, made it clear that though something is clearly missing in their lives, they’re resolutely moving forward on their journey toward wholeness.

Perhaps her ability to play such impacting personalities came from her own life’s journey. She endured a rather tumultuous set of challenges. Among her more notable trials, she fought a long battle with breast cancer, and during that struggle suffered the death of her husband to a fast-spreading pancreatic cancer. Adding to the woe were poverty, weight issues and a nervous breakdown.

Yet, none of these defeated her. Through it all, she found that humor helped her to move forward. She became an activist for curing cancer, giving lectures where people spent more time laughing, and subsequently, giving. She penned her autobiography cleverly titled, Don’t Look Back, We’re Not Going That Way, which I have discovered is a nod to her father’s humor. In her book, she talks about the moment of her husband’s death:

“And I’m sitting there, just feeling him and the doorbell rings and it’s the $25 worth of Thai food I had ordered! And I actually did say to him … ‘You’re dead 3 minutes and I’ve got food at the door!'”

Upon hearing of her death, her friends and admirers tweeted that she was gracious, brilliant, funny, determined and inspirational, which I believe sums up the real beauty of the remarkable Marcia Wallace. She kept going. Her humor prevented her from being defeated by self-pity or the great weight of her challenges. She proved that one could endure the trials of life armed with a bit of determination and a willingness to laugh, two gifts of strength with which I believe God has blessed me.

As a lover of The Simpsons, to no longer see or hear Edna Krabappel is a sad thought. Things were just getting really good for her. I’ll miss her love/hate relationship with Bart. I’ll miss her developing relationship with Ned Flanders (a shocker for me). Edna figured a few things out. She came to terms with what life had handed her, and she seemed to have made peace with the woman she’d become. It would have been nice to see how she would be in this time of her life. Yet, Krabappel’s retirement must forever be a silent memorial to her true animator, Marcia Wallace, the gifted, strong woman who taught us how to persevere with a good laugh.