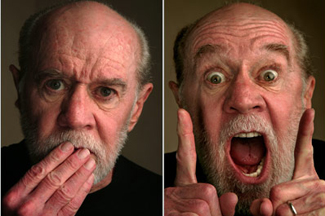 When George Carlin died in 2008 at the age of 71, American comedy lost one of the sharpest and truest voices it had ever known. Over five decades, Carlin forged a body of work that is awe-inspiring in terms of its breadth, intelligence and relevance.  The Irish Catholic kid from Corpus Christi parish in Harlem–with barely more than a year of high school education–combined his own fierce and fearlessly questioning mind with the lessons he’d learned on the streets of New York to craft comedy that made audiences laugh and challenged them to think. Beginning in the mid 1990s, bestselling author and actor Tony Hendra (Fr. Joe, Spinal Tap) recorded countless hours of conversation with Carlin for a planned “sortabiography.” In the interview that follows, Hendra discusses his subject’s unique career and how–though Carlin rejected the Catholicism of his youth, the questioning, scholastic model of inquiry taught by the nuns in elementary school informed his own search for meaning and coherence for his entire life.

Busted Halo: Carlin’s evolution as a comic is pretty phenomenal. There was this constant sense in the book of the artist at work on his craft. It’s hard to stay around for two years or five years. It’s unheard of to be around and relevant for almost fifty years. Can you talk a little bit about that?

Tony Hendra: Well just from the point of craft; when we first sat down in the mid-90s, to do our first conversations (we never really did interviews) about comedy, he made it very clear that he didn’t want to do an autobiography; he didn’t want to do a memoir. But what he did want to do — and he was very clear about this — he wanted to do the ‘Story of My Art.’ How he got from where he started to where he ended up, and that’s all he really wanted in the book. And at first, the editor side of me said, “This may get rather tedious,” and so I was at pains to explore with him as much as possible what he meant about that, what he thought about comedy and what he thought had happened to it. One of the tools he presented me with at the onset was this staggering collection of books that literally included every single booking he had ever done, right from ground zero to wherever he was in the 1960s to the present day. And he said, “This is going to help us a lot.” And I said, “Okaaaaaay?” There were hundreds of them recounting events like, “And I appeared at the Greek Numb Nut Chateau in 1965.” (Laughs.) And that’s what I didn’t want the book to be, I didn’t want it to be an “I did that.” And I don’t think he did either, but he needed help. He was always, constantly saying these great things on tape, things like, “Gee it was fascinating to know what I was doing in the 80’s.” He hadn’t actually externalized it sufficiently to know what that arc that he spoke of was. So discovering that arc was kind of a joint venture, and I think that’s one of the reasons it’s very engaging. It has passion in it, it has mistakes; he fumbled badly a couple of times. But that’s the nature of evolution; there are blind alleys.

But I think it’s great that you had that reaction, because that’s really what we set out to do. And as I say, when you look at it, oddly enough both nature and nurture gave him an advantage in terms of his verbal facility, his obvious comedic sense but also his mother’s constant drumming into him that words mattered, and their accuracy mattered; that plus the street was a fantastically powerful cocktail. Just running wild on the Harlem streets as a kid, plus having this mother who insisted that he talk like a gentleman. So I think that was both an explosive and a very determining factor.

I think his legacy is going to be that he’s every bit as popular and long-lasting as Mark Twain, and I think his work is just as voluminous in its medium, and if anything, stronger.

The other thing was, he was obsessive. He really had no interest in anything except himself and his art. It’s funny, I’m reading a biography of Fellini right now, and he’s very similar. Not in any obvious way, but in the sense of coming from this Catholic background and completely rejecting that, but at the same time having a very Catholic attitude toward the tangible versus the spiritual, but at the same time, he didn’t care if he worked for Mussolini, he (Fellini) didn’t care if he worked with the Communists. He was just completely uninterested. It’s fascinating. It’s not at all the image you take of Fellini; you think he was this left-wing, French nouveau, kind of — but not at all.

George worked for the side that paid him the most, I think, but that was self-selecting, because the kind of message he grew into was not going to be any more comfortable in Las Vegas than it would be on The National Review’s annual cruise. (Laughs.) But that was part of it. He never lost his focus; he wanted to be absolutely the best there was at what he did. Starting out, that is. Afterwards, I think he wanted to become not necessarily the best, but to get all of it out. And he never succeeded at doing that, When he died, the family went through the notes he kept on computers, and that’s how he built these routines, and he must’ve had enough material for another 2,000 minutes, which is a lot of shows.

TH: Yeah, he had oodles of material. So I think that’s a great deal of it. And the other technical, comedic insider thing — he said he hated topical humor. First of all, because he didn’t like throwing things away — that was the main point — but the other side of that is that if you don’t do topical humor, your stuff is timeless. And so even though that probably wasn’t his intention, he tended to write pieces that lasted for all time. Like “A Place for my Stuff,” “Seven Words,” even though you can’t say some of it on television, it’s still as funny as it ever was, it’s just hysterical. And, ‘I used to be an Irish Catholic,’ all of these forty-year old routines are brilliant.

BH: I imagine when Steve Martin’s book came out a few years ago, all of my comedy friends read it voraciously, and I’m wondering if people don’t want to admit that they were influenced by him, or that he was relevant, or that he was important to them.

TH: That’s interesting. I haven’t heard that. I must say, in the business, it’s very rare that you hear a bad word about George. Partly I think that’s just respect, but it’s partly that he just taught people so many things. He was kind of their bible; they took what they wanted from George. But I think there are a lot of comedians and comedy people out there who don’t want to admit that this is an important book, because they want to write a comedy book one day. It’s that sort of professional jealously. But I predict that this will become one of those books that people will read almost professionally because there’s so much in it about how to be a great comedian.

George’s fans are hugely loyal I think, over and above other comedians, because he went and met them and performed for them live. He wasn’t just a voice on a piece of furniture. And that’s what an awful lot of comedians are.

BH: Where does he rank in your mind in terms of 20th century comedy?

TH: Well I wrote this Huff Post piece when the book came out which argued that he could be called the greatest American comedian of the 20th century. I certainly don’t think anyone but Richie Pryor, or possibly Lily Tomlin — though she had a more comedic career rather than a comedy career, I do think that she blazed a trail that was very important, and she was an exact contemporary of Richard and George. But I don’t think anyone comes close to Carlin in terms of serious intent, including Richard, actually.

TH: Well, yeah, and that’s the question that everyone asks. But the thing about Lenny was that Lenny died; Lenny died in his thirties and he left a lot of work undone. And certainly his work in the late fifties was brilliant beyond comparison, but just because somebody dies doesn’t mean that those who live are inferior. I mean [sarcastically] if you want to be a star, have the good sense to die. They don’t go gold until they’re dead; that’s actually a record industry saying. (Laughs.) But I would argue that in terms of the range, the depth, the longevity and the fact that he didn’t ever stop. I think that the 2000s (whatever we call them) were a plateau. He called them the plateau, and I think that’s correct. I don’t think he went very far up after the 90s, even in the early 90s. I mean, he thought that Jamming in New York was the best special he’d ever done. That was 1992. But the other HBO specials, they’re the sort of mark we have, but as for the concerts — I saw him do a concert in 2001 — just brilliant, brilliant stuff. I mean, he was just as good, and he kept coming up with material. The Coast to Coast Emergency, which started off as, “I really like it when a lot of people die,” was a wonderful piece. It’s a masterpiece of words and performance, just brilliant.