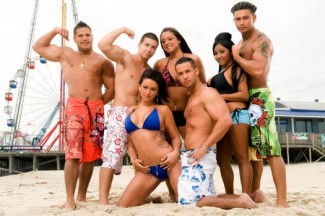 I’ll admit it, I watch the “Jersey Shore.” I’m addicted to the antics of The Situation, the lovable Pauly D, and overly coiffed Snooki. I count down the hours every week to 11:35 Friday morning Central European time, right after the Shore airs in the United States, and I can finally finagle streaming the show overseas to my Berlin kitchen table. But while there is no disputing the bronzed bunch’s unexpected pop culture success, I often find myself wondering if their antics are something I should fill my head with.

How much do things I see on the show affect me? When Pauly D and The Situation bring home girls to the “Smush Room” every night, is there a point where this ceases to shock and instead becomes ok? When my friends tease me about my trash TV addiction, I argue that I don’t really take any of it in. Instead, I watch and turn my brain off when it’s crammed to overflowing with Stanford-approved literature. But at times I wonder if this is true. Even in watching shows like this purely for superficial entertainment purposes, are they a setback in seeking a spiritually rich life?

Being Catholic on “Jersey Shore”

“Jersey Shore” is interesting to me too because it’s an example of Catholics in the media. Pauly D and the Situation wear rosaries pretty regularly when they go out. I realize this is more of a fashion statement than anything to do with prayer, but rosaries are still very recognizably Catholic. All of the characters on the show are Italian American, tracing heritage to a country that has one of the most Catholic populations in the world. Pauly D even attested to being Catholic in season one, and the cameras showed Sammi and Ron going to church a few times back in season two. Is this a good example for us to be seeing of Catholicism in the media or not really a representation at all?

I personally have always seen being Catholic as a cultural heritage more than anything else. Harkening back generations and tied intrinsically with my Polish and Southern German roots, being Catholic is a part of my identity as much as anything else. And in that way, the way I see it, the “Jersey Shore” cast is a Catholic representation, too.

But in the spirit of “he without sin casts the first stone,” I think the best approach is to ignore the junk and focus on the good. Looking past superficial values, blow-ups, and blow-outs, the show has some redeeming qualities.

Vinny’s tight-knit Italian family for one. A swarm of uncles, siblings, and cousins always trek to the Shore at some point every season, taking over the house with their bear hugs, spiced sausage and peppers, and thick Staten Island accents. That kind of tight-knit, loving family is something to be admired and emulated. Post fistfights, tears, and even pulled out hair extensions, they always find a way to forgive and move on. They protect one other and will always stand up for their housemates when external forces threaten any member of their Shore family. Even if I wouldn’t necessarily choose their partying and lifestyle choices for myself, I find value in these aspects of their lives.

Like it or not, they are here to stay for a while. And although I feel slightly guilty about it, I for one am thrilled.