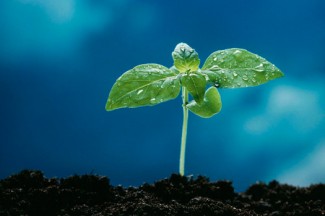 Let’s talk about the New Year. If you’re like me, you picked up a few magazines with promising headlines like “Finding the New You in 2012: Your Easy Guide to a Physical and Emotional Makeover!” at the grocery store, wrote some resolutions on a piece of paper you might be lucky enough to find if you happen to be moving, and checked out the “Year in Photos” feature of a news website for good measure. If you’re really serious, you might have even gone to the gym. Twice.

But now that all the newness has worn off, it’s time to revisit the New Year. What makes it so attractive, anyway?

Lately, I’ve been thinking a lot about new things, particularly new beginnings. There are certain times in my life when I’ve felt that nagging feeling of “I just need to do something new.”

Granted, most recently, I got a perm. Yes, perms are still around! I’m told Taylor Swift revived them.

So, a perm. It was probably my most popular Facebook status of 2011, actually. Was I worried my hair would fall out? Absolutely (hence the Facebook status). I was particularly worried when the hairdresser at the beauty school said, mid-solution, that she didn’t really remember how to do perms, since the last one she tried had been such a long time ago. Ah, the lengths we’ll go to try something new (or the length we’ll cut, dye, wave, tint, etc.).

Yes, I still have my hair. The curl is nice, but it didn’t satisfy my question. What is that nagging feeling all about?

The most interesting part about wanting something new is that what we are willing to leave behind isn’t always heinous or awful. My hair was okay, I guess. When we move somewhere for work or school, it’s not that we love the people we leave behind any less. We just want something new.

Sometimes, we want to hide. You might think, “I just want to go somewhere where no one knows my name.” Sometimes, the grass looks greener: “If I move to Florida, I’ll enjoy the warm temperatures year round.” (Well, in that case, the grass might actually be greener.) You get the point. But other times, we feel called.

If there’s some feeling inside of us that we can’t exactly explain or give a good reason “why,” it’s probably God. I think it’s God’s way of saying, “You’ll find out once you get there. But for now, you have to go.”

When I was little, my mom shoved me into extremely tight tights (prompting my cautious attitude towards tights being back in fashion) and threw a ruffled dress on me one too many times before going to church or some family event. On our home videos, before we left the house, my mom would say, “Okay, time to go!” And I’d always say, “Okay, Mommy.” My, was I trusting. I couldn’t feel the lower half of my body, and I still felt the need to follow her!

But that’s what kind of a parent God is sometimes. God calls us to something new — some new beginning — before we even know why we’re going there. It’s the adult in us that wants to say, “Wait a minute, where are we going? And what is this dress I’m wearing?” It’s the child in us that trusts our parent to tell us when it’s time to go.

Perhaps one of the biggest decisions I’ve trusted God with was where I attended college. I’d love to say I debated for weeks, made a Word document of pros and cons, e-mailed two faculty members and four current students, and consulted everyone I knew before arriving at the perfect decision. Not hardly. After not getting into my “dream school,” I hastily went on a week of college visits in the spring. The tour we took of Saint Louis University featured the lobby of the recreational gym before getting rained out. So, I saw the lobby of one building. However, my tour guide was phenomenal, making me think that sometimes people are the messengers of God’s plan in our lives. There was something about his genuine love of the school that nudged me. With faith, I overnighted my application two days later, just in time for the enrollment deadline. The day I walked on campus was the first day I completely saw where I would spend the next four years. As a wise person once told me, “Sometimes, the feeling is enough.”

I think that’s my challenge: to trust those nagging, unexplainable, intuitive feelings before I overanalyze them. God probably figures if He told us where we were going, we might flat out refuse to go and throw a tantrum. God is a good parent in that He lets us know enough, but not everything.

That’s the only way we’re going to get out the door.