Football season is over, the start of the baseball season is still a month away, and yet this is my favorite time of the sports year — March Madness. Aside from the joy I get from any use of alliteration, the NCAA Basketball Championship Tournament offers 68 different teams the opportunity to compete for the championship trophy. (Scroll down to read the rest of the article!) 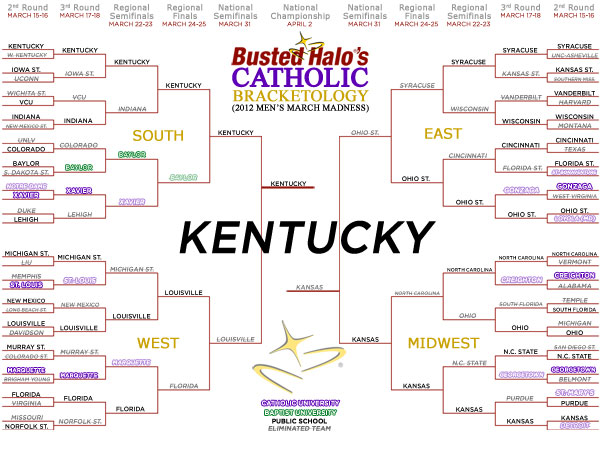 It is not unusual to see schools with religious associations competing extremely well during the college basketball season and championship tournament. That’s not the case in college football. In fact, according to the Wall Street Journal, entering this season, schools like Villanova, Brigham Young, St. Johns, Providence, Dayton, Notre Dame, and Georgetown all have an average winning percentage of more than 50% with Villanova leading the way with a respectable 64%. Overall, a total of seven schools with a religious affiliation have won the Men’s National Championship Tournament since its inception in 1939 (Holy Cross, LaSalle, Loyola Chicago, Georgetown, Marquette, San Francisco, Villanova), and three such schools have won the Women’s National Championship Tournament since its beginning in 1981 (Notre Dame, Old Dominion, Baylor).

This year there are several teams from colleges and universities with religious, and specifically Catholic, ties in the tournament. Twelve different schools with Catholic roots (see Busted Halo’s Catholic Bracketology above) will take to the courts in the men’s tournament — nine Catholic schools in the women’s tournament. Whether or not any of these teams will earn the chance to compete in the Final Four and eventually for the championship will play out in what I honestly believe is the best post-season tournament in all of sports. Nothing beats the win-or-go-home atmosphere that March Madness offers its teams and fans every year. There will be Cinderella stories, last-second half-court shots, bracket busters, and of course that one shining moment for the winning team.

So, here are my predictions. I do believe that there is a great possibility of at least one religious-affiliated (probably even Catholic) school making it to the Final Four in both brackets. I expect great tournament runs from Baylor (Baptist), Notre Dame (Catholic), and Georgetown (Jesuit) in the men’s and women’s tournaments, as well as Marquette (Jesuit) on the men’s side. It appears as though the Jesuit order may have the percentages on their side with six different teams in the tournament, but I warn you not to sleep on the plucky Catholics and Baptists.

Even though I would love to see any team with a Catholic link break through and do well, I have to admit that I am biased and more interested in how my alma mater Notre Dame performs. Even though Notre Dame is known for its football glory, the basketball programs rouse loyal sons and daughters from their seats to cheer on the Irish. Over the years it has been a challenge to remain a fervent Notre Dame basketball fan (a.k.a. proud member of the Leprechaun Legion). Often times both teams literally plow through the wintery regular season only to flounder in the spring tournaments. Last season I was once again disappointed in the men’s team after losing badly in the second round to Florida State, but very proud to see the women’s team make it all the way to the championship game, losing to Texas A&M in the final seconds.

I have been out of school for too long now to actually know any of the players personally. However, I still have personal connections to the teams. For instance, if you watch the Notre Dame men play a game, you will no doubt notice Fr. Pete sitting on the bench and praying with the team before, during, and after the game. When I was in school and living in the largest and best male dorm on campus, Dillon Hall (Go Big Red!), Fr. Pete was actually Deacon Pete, and it is my fond memories of him that have me easing up on my harsh views of the team and their coach (which will return immediately if they let Xavier get the best of them in a battle of Catholic vs. Jesuit this Friday). I also had the privilege to play several pick-up basketball games with the women’s team at the school’s recreation center. It’s my biases and the promise of another championship game run for the women’s team that will have me glued to a television for their tournament games again this year.

Leaving my personal feelings behind, this particular March Madness is going to be great. Focus on Baylor, Notre Dame, Marquette, and Georgetown, but don’t be surprised when I am completely wrong and your brackets suffer because of it. It will be exciting to follow each one of them as the Madness progresses. Join in on the excitement and set up your own version of nerd central, which for me involves three televisions, a laptop, cell phone, and iPad — all so I can watch as many games as possible and get all the news I need to scratch my basketball itch. Get ready, fill out those brackets for your office pool, put on your team shirt, face paint, favorite foam finger, and enjoy the March Madness. 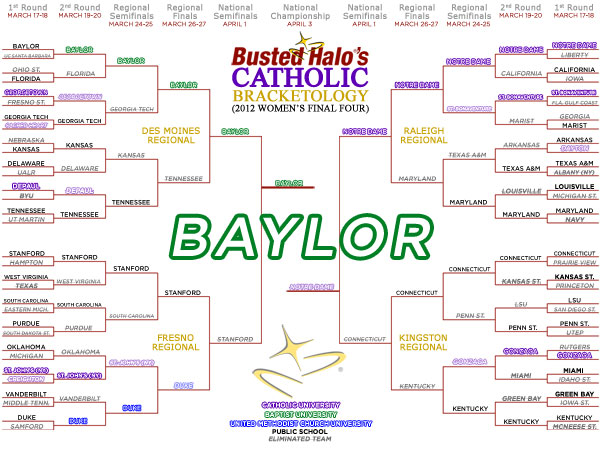