We’ve all heard the jokes. Ever since the term “baggage” entered popular use thanks to the 80s inner child movement, it’s been both a warning — “I have a lot of baggage” — and a punchline.

Example: A few weeks ago on Jay Mohr’s sitcom, Gary Unmarried, before he meets his ex-wife’s new boyfriend, she says: “And I really like him, so please don’t make that joke about how his strong grip will come in handy when he’s carrying all my baggage, OK?”

The broad definition of baggage is: something from the past that continues to weigh you down.

Christine used the word “fraught” in last week’s excellent column about toxic friends. I love the word fraught. It comes from the same root as freight and literally means “loaded down with baggage.” So many of us are loaded down with baggage from our past. So, literal and spiritual housecleanings are a necessary practice for everyone. And if your past regrets and scars are ruining your present, cleaning your spiritual house can transform your life.

The most common use of the term baggage is trauma or bad experiences from the past that taint your ability to face the present with trust. The most disturbing is child physical or sexual abuse, but many less severe forms come into play too. Typically, when past experience of dating jerks and deep unresolved issues with parents block us from being able to trust and be open with a partner.

Prayers for letting go of baggage

Here is a wonderful prayer for expressing our desire and willingness to be free of baggage. It’s commonly called “The Seventh Step Prayer”:

My Creator, I am now willing that you should have all of me, good and bad. I pray that you now remove from me every single defect of character which stands in the way of my usefulness to you and my fellows. Grant me strength, as I go out from here, to do your bidding. Amen

An anonymous prayer inviting the immediate relief of surrender:

A Sanskrit proverb for living in today:

Look to this day,
For it is life,
The very life of life.
In its brief course lies all
The realities and verities of existence,
The bliss of growth,
The splendor of action,
The glory of power.
For yesterday is but a dream,
And tomorrow is only a vision.
But today, well lived,
Makes every yesterday a dream of happiness
And every tomorrow a vision of hope.
Look well, therefore, to this day.

Another kind of baggage is low self-esteem, perhaps due to a parent who told us we could never succeed or that we were ugly, fat, stupid, useless, etc. Despite being years, even decades, free of their direct influence, we can still be weighed down by these judgments.

I’ve talked here before about what Margaret Silf calls the if-onlys — “If only I’d made a different life choice.”  “If only I didn’t drive my children away.” “If only I didn’t let my marriage fall apart.” These can weigh on us too; if we refuse to accept and release some past failure, we are stuck, replaying it and unable to move forward based on the new reality because that would acknowledge the failure (while contradictorily also beating ourselves up for it.)

The beauty of grace

Many therapeutic approaches can get bogged down in causes, even focusing entirely on the past to the neglect of the present. Others see only a long slow recovery from the depths, offering a bleak and arduous outlook.

But God doesn’t want you to suffer. The message in scripture is not one of a slow, painful, expensive process. Jesus says:

“Come to me, all you that are weary and are carrying heavy burdens, and I will give you rest.” (Matthew 11:28)

Many other spiritual traditions have a similar message. Instead of analyzing and fighting your issues, turn them over and let go.

And, foundational in the Christian view of self, failure and personal growth is a belief in the possibility of radical transformation — “radical” as in from the roots up. Total rebirth. That if you turn back to God, the change in you can be instantaneous. You are renewed.

The therapy world has been moving in this direction too, in its own way. In an earlier column, I mentioned Rational Emotive Therapy and how there has been a shift from the endless Freudian talk therapy and its obsession with childhood, towards an approach that often says in different ways: It doesn’t matter why you got into the dysfunctional pattern you are in; in fact, focusing on it just reinforces it. Just do the right thing now.

What I’m talking about here has nothing to do with chemical depression. I will look in depth in a future column at the difference, and the harm that can be done by telling people they should just be able to snap out of their problems. But if what is blocking you is not chemical — if it is baggage — you can be free of it as soon as you are ready.

Some of the simplest and most striking expressions of this view are found in Christian popular music, which often focuses on applying spiritual principles to everyday life. Take Kirk Franklin’s "Imagine Me":

Those that struggle with insecurities, acceptance and even self esteem, you never felt good enough, you never felt pretty enough, but imagine God whispering in your ear letting you know that everything that has happened is now gone, gone, it’s gone, all gone. Every sin, every mistake, every failure, it’s all gone!

And here’s Krystal Meyers’ “The Beauty of Grace”:

Anywhere you are is never too far away
There’s freedom from your scars, the mistakes that you’ve made
Forgiven, the memories erased
Baby, that’s the beauty of grace.

The saying “Drop the rock” is often associated with 12 Step recovery’s 6th and 7th steps, which focus on turning one’s flaws over to God. The story goes that someone is swimming to a lifeboat and having a terrible time of it; they barely feel like they’re making any progress, at times they even feel like they’re sinking.

The people on the boat call out, “Drop the rock!” At first the swimmer doesn’t understand, then suddenly they realize they’re carrying this huge boulder. They let go of it, and swim easily to safety.

If we decide — not intellectually, but in our heart — to let go of a piece of baggage from our past, the moment we truly surrender it up to God, often that’s all it takes. As Kirk Franklin says, “It’s gone, all gone.”

On the right, I offer a few suggestions of prayers to help with baggage. I’d love to hear your experience with letting go of a piece of baggage you’ve carried for years, or even just of recognizing it if you haven’t been able to let go yet. (I know you all have baggage!) Share your experiences by leaving a comment below, or email me at phil (at) bustedhalo.com. 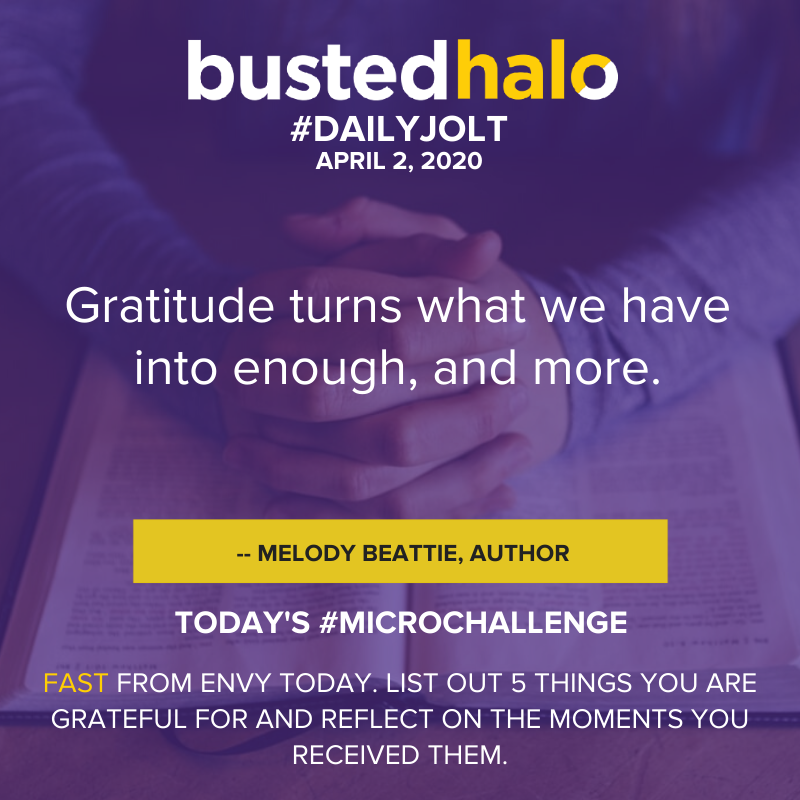