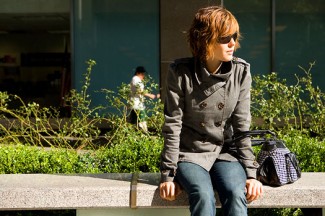 One of the most popular columns I’ve ever written is about struggling with being on time. It led to a TV interview and over two years later people still regularly bring it up in conversation. But working on your own on-timeness can lead to an interesting new issue: being on time when others are not.

It’s one thing to be on time and have everything go smoothly. You can point to your on-timeness and feel a sense of self-satisfaction at having contributed to the proper flow of the universe by having aligned yourself with the way things are meant to be. Call it spiritual pride or call it enjoying the fruits of “skillful means,” we all enjoy it when we do the right thing and things go our way. But what about when you are on time and someone else isn’t?

There’s a long-distance bus I catch fairly often in the summer coming back to the city at the end of the weekend. My stop is in the middle of its route and, almost every time, the bus is about 10 minutes late. The place we wait isn’t covered and today it was 15 minutes late, in pouring rain. This is not convenient. I know it will probably be late, but I still have to make sure I’m there on time because every once in a while it is, and it doesn’t wait around for me if I’m late.

When the scheduled time arrives and the bus doesn’t, I see other travelers start checking the time. (I was going to say “checking their watches” but most people don’t check watches anymore, they check cell phones.) At first they do this as if to check their internal clock: “Isn’t it 11:50 yet? I’m sure it must be.” As the minutes tick by, the time checking starts getting more dramatic, as if to communicate: “You all see that the scheduled time is past and the bus isn’t here, right?!”

Often, if and how much I’m bothered by waiting is in direct proportion to how much distress I went through to be there on time.

But the bus will arrive when it arrives no matter what we do. And if it’s on time and I’m late I’ll miss it. There’s no choice to make. Or action to hurry it up. Simple as that.

Like pressing the elevator button more than once, all the street theater has no effect on the result.

Often patientily. Somtimes not quite. I’ve noticed that if and how much I’m bothered by waiting is in direct proportion to how much distress I went through to be there on time. If I am there in plenty of time and stroll comfortably up to the stop and join the first people in line, then all is right in the world. But if I miscalculate or something comes up at the last minute and I end up scrambling to get to the bus stop in time, anxious the whole way that it will be on time and I’ll miss it by a minute (there isn’t another one for hours) and then I end up waiting around, my ego is outraged. I didn’t need to rush! I didn’t need to stress myself out! My time is valuable; how dare they waste it!

This line of thinking veers into the magical when I start blaming the late bus for the fact that I am agitated from running late and having to rush. This doesn’t even make sense — but this is where the mind goes.

And being upset is all the crazier because, what actually happens if I’m on time and the bus is late? Well, I spend ten minutes enjoying the day (when it’s not raining), sometimes getting into an interesting conversation with one of the others waiting. It’s no hardship at all. It doesn’t even mean I’ll get home late; the bus makes up the time along the way.

Being upset is all the crazier because, what actually happens if I’m on time and the bus is late? Well, I spend ten minutes enjoying the day, sometimes getting into an interesting conversation with one of the others waiting.

It doesn’t matter if you’re waiting for a bus or an elevator, for your turn in a line, or for that friend who often runs a little behind, the fact remains that working yourself up about it does no good.

So here’s what I propose: The next time you are waiting for someone or something and you find yourself getting irritated at them and the universe, pause, take a deep breath, perhaps spend a minute imagining that there might be a good reason they’re late (though that’s not important), and turn your attention to enjoying the present moment. If that doesn’t quite do it, pull out the big guns and pray for patience.

If you’re waiting with other people, smile at one of them or start a conversation. If there’s something you could be doing, like checking email or reading, you could turn your attention to that, though just being in the present moment is even better.

Often the irritation just evaporates. It was built on nothing but air in the first place.

What is your experience with waiting? Have you found other ways to be patient? Does it drive you crazy? Share below in the comments.

This column was originally published on August 25, 2011.