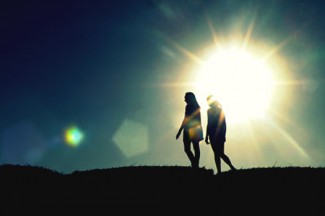 I was in college — graduate school — when I met my friend Amy. We were in a creative workshop, and when we both confessed to writing about faith, we shared a moment of recognition that C.S. Lewis describes as the beginning of any true friendship: What, you too? I thought I was the only one!

When our class took an end-of-the-year trip to New York City, Amy and I stayed on an extra day, crashing in the empty apartment of an acquaintance. We walked and talked for hours, covering miles and pouring out our stories. Late that afternoon, we walked into a bookstore just long enough for Amy to pull a small pocket edition of the Old Testament Book of Ruth off the shelf. Later, on the rooftop of our friend’s apartment, the city streets humming below, we passed the book back and forth, alternately reading and listening with almost breathless attention.

When Ruth, a widowed Moabite woman, is joined to the Israelites by proclaiming her undying loyalty to her mother-in-law, Naomi, we were electrified by the power of her ancient promise:

Whither thou goest, I will go. …
Thy God shall be my God.

We were praying together for the first time, though we hardly realized it. In these two women — removed from us by centuries and cultures — we received a vision of a different kind of friendship, a way of walking with one another toward God.

A few weeks later, we both graduated, got married, and moved on. But we continued our friendship through letters. After five years, we really had walked with each other, not just through the trials of daily life but through a tragedy that might have ended our friendship. We had gotten pregnant with our first babies within months of each other, and we had worked ourselves into an ecstatic frenzy over having daughters of the same age. But five months after my daughter’s birth, Amy’s daughter was stillborn.

I doubted I’d have the strength to fulfill the vow I’d made that night in New York, in the words of Ruth and Naomi, to follow Amy wherever she was going. I have failed at friendship before — more times than I care to admit. I have found myself unable and even unwilling to bear another’s burdens.

In the 1950s, C.S. Lewis was already calling for a “rehabilitation” of the subject which ancients and medievals had so much to say about. He thought that what passed for friendship in his day was merely convenient companionship, not the stuff of eternity.

And yet our friendship survived and still survives our sorrow. The road is often dark and sometimes we lose the trail altogether. But we continue to walk it together, to pour out our stories, doubts and questions, and somehow, by some grace, we feel our way.

We’ve walked far enough together that at this point it seems insufficient to call Amy just a friend. But “soulmate” sounds drippy and romantic, and to say we have a “spiritual friendship” sounds impossibly pious. The former conjures airbrushed lovers gazing deeply into each other’s eyes, and the latter, nuns.

Lewis, in “The Four Loves,” said that true friends do not gaze at each other; “their eyes look ahead.” For him, friendship is not an accident of proximity; it must be “about” something. What distinguishes my friendship with Amy from other relationships in my life is that it’s “about” God. We had hunted for God independently our whole lives — in churches, theology, literature — and before long we realized we experienced God’s presence most profoundly when we came together. We continue to stalk him together.

There are many classic writings on true friendship. Catholics, in particular, have seen its spiritual possibilities. Aelred of Rievaulx, a 12th century monk who wrote the classic Catholic book on the subject, thought that it is most especially through friendship, rather than solitude, that we abide in God and God in us.

But our culture no longer sees friendship in such serious or religious terms. We have largely forgotten that friendship can bring us closer to God. In the 1950s, Lewis was already calling for a “rehabilitation” of the subject which ancients and medievals had so much to say about. He thought that what passed for friendship in his day was merely convenient companionship, not the stuff of eternity. I can’t imagine what he would have thought of the age of Facebook, where “friends” are made and ended with a click.

Lewis was not talking about spiritual friendship in particular, but much of what he said is helpful to those who yearn for such a friend. He imagined that to establish true friendships, we must be removed from our context, not bound by our shared history or our positions in the world.

In that sense, college is the ideal environment, as I found in graduate school. Most of the people you meet are living away from their families for the first time, removed from their past roles of son, daughter, sister, brother. They may be far from home. Few, if any, will be married. Nobody will have settled on a career or vocation. You come together as “naked personalities,” as Lewis describes it, and, maybe for the first time in your life, form friendships based purely on shared interests, not zip code, age, or the alphabetical order of your last name.

Of course, many lifelong friendships have been forged on little more than shared history or zip code, a love of sports or music, or just sharing a beer. Such companionship is a necessary and treasured part of life. But as Lewis said, we “do not disparage silver by pointing out that it isn’t gold.” He would urge us to remember that there is such a thing as gold — the friendship that leads us closer to God.