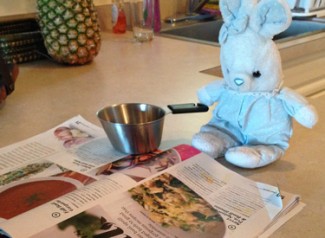 The only possession I’ve carried with me since childhood — through multiple moves and through pivotal moments in my life — is a small stuffed bunny named Kung Fu. It’s an odd name for a cute little bunny dressed in a light blue jumpsuit with white ruffles and a bow on one ear. But it’s a telltale sign I grew up with only brothers, as they’re the ones who helped me name him. At one point in my childhood, my brothers found an almost perfect replica of Kung Fu, only larger, which they gave me for Easter and named Mrs. Fu. I’m not quite sure what happened to Mrs. Fu — perhaps she fell victim to one of my annual trips to Goodwill in high school or college. As I packed up my old apartment before our wedding, I wondered what would be Kung Fu’s fate in my married life. It somehow felt like a final transition — that I was entering adulthood (whatever that means) and my childhood stuffed animal would no longer fit.

And yet, one of the coolest discoveries about marriage and love in general is how it allows the freedom to revel in my goofy, childlike side. Andy’s love makes me feel safe — to dance around the apartment like a goofball, share the most embarrassing stories of my day, delight in a surprise bag of Jelly Bellys, and giggle uncontrollably when being tickled. Kung Fu doesn’t just fit into my life’s new, freeing vocation; Kung Fu has been at the heart and center of this playful side of marriage.

In the sometimes humdrum reality of day-to-day life, it’s easy for relationships to grow stagnant. My dad has always stressed the importance of surprising one another in marriage as a way to prevent that. Years ago when my brother was dating my now sister-in-law, he would somewhat regularly buy her a bouquet of roses. In response to my brother’s courting gestures, I remember my dad saying: “It’s the flowers after the wedding day that mean the most.” Thirty-five years into marriage, my dad is always plotting different surprises for my mother. And without realizing it, Kung Fu has become Andy’s biggest accomplice in surprising me.

Without realizing it, Kung Fu has become Andy’s biggest accomplice in surprising me. It started out in simple ways. When I’d come out of the shower in the morning, I’d find the bed made and Kung Fu comically displayed. One day, he had ear plugs in his ears; another day he was wearing headphones; another time a thermometer was propped against his mouth.

It started out in simple ways. When I’d come out of the shower in the morning, I’d find the bed made and Kung Fu comically displayed. One day, he had ear plugs in his ears; another day he was wearing headphones; another time a thermometer was propped against his mouth. Each morning he had a new prop that never failed to make me giggle. The plots have become a little more developed lately. I came home from leading a weekend retreat to find Kung Fu sitting in our prayer corner with the daily readings opened before him (apparently he had been retreating, too). Another night, I came home from work and Kung Fu was sitting on the kitchen counter with a mixing bowl, measuring cup and our dinner recipe ready to go. Recently, I left Kung Fu on the couch with a bag of Jelly Bellys and a note for Andy as a surprise. A few hours later I got a text from Andy with a picture of Jelly Bellys all over the couch and Kung Fu looking suspicious with his arm in the opened bag. Kung Fu has taken on a life of his own in our imaginations, and we giggle as we try to decide what he is thinking or saying at certain moments.

We’ve written a couple posts about the challenges of the first few months of marriage. There’s no denying that all relationships take work. Andy and I are both ministers, prone to search deeply for the grace in the ordinary. That kind of intentionality, despite how spiritually rewarding it is, can be exhausting. But Kung Fu reminds me that the life of faith and the vocation of marriage aren’t all work. Grace often surprises us and brings a tremendous amount of joy and giggles. We believe in a God of surprises, and we’re finding that marriage is full of them too.