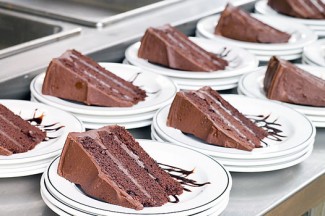 Fat Tuesday, the day before Lent begins, has long been one of my favorite days of the year. Mostly because, for all of my childhood, the day before Ash Wednesday (when I went to church and had some weird, dark substance smudged on my forehead) was dedicated to eating delicious, fattening food.

On Fat Tuesday the pink- and white-speckled countertops in the kitchen I grew up in were loaded with my (unhealthy) favorites: Spinach dip loaded with fresh artichokes and spinach, teeming with globs of sour cream, Parmesan and mozzarella cheeses. Rotel dip with ground beef swimming in canned Campbell’s cheese soup and Rotel diced tomatoes. Red velvet cookies topped with syrupy, sweet cream cheese frosting. Hot wings so spicy they burned your lips and tingled all the way down.

For my family, namely my mother, this spread was designed to get “it” out of our systems. “It” meaning the tendency to give in to gluttony and succumb to all the food that’s bad for you. Lent would be a time to change, to sacrifice these mouth-watering foods. As a child, most of my Lenten sacrifices were food-related, such as depriving myself of the cakes, pies, cookies and sodas I loved.

For my family, namely my mother, the Fat Tuesday spread was designed to get “it” out of our systems. “It” meaning the tendency to give in to gluttony and succumb to all the food that’s bad for you. Lent would be a time to change, to sacrifice these mouth-watering foods.

Fat Tuesday is that one last day to indulge before becoming more mentally and spiritually attuned to God. Also known as Mardi Gras. Fat Tuesday coincides with the Carnival season within the Catholic tradition, which begins with the Feast of Epiphany (January 6). Epiphany celebrates the arrival of the wise men bringing gifts to the infant Jesus. It’s also linked to the famed King Cake, a sugary pastry tradition that started in 12th-century France and is enjoyed throughout Carnival. Over the years, the French in New Orleans modified the celebration to include dances, balls, parties and beads, but even the key colors of Mardi Gras and Fat Tuesday — purple (for justice), green (a symbol for faith), and yellow (representing power) — are symbolic colors within the Catholic Church.

The bottom line of Fat Tuesday is indulgence. Eat rich and fattening foods, spoil your taste buds, partake in a junk food marathon. Because what comes next is Lent — a time for sacrifice. The period of Lent represents the 40 days and 40 nights that Jesus spent in the wilderness meditating and growing closer to God, isolating himself from his everyday life, and thereby stripping it down to only the essentials. In this solitary time, Jesus’ focus on God was rejuvenated — something we’re all called to during Lent. Whether we give up watching hours of television or a beloved snack in exchange for more time with God, the hoped upon result — renewed focus and dedication — is the same.

So, indulge today, but also pause and reflect on the ways you can strengthen your relationship with God during the Lenten season. Between bites of fancy sweets and savory treats, start thinking about your dependency on God for nourishment. Rediscovering and rekindling the sense of reliance we have on our Creator is what Lent is all about.