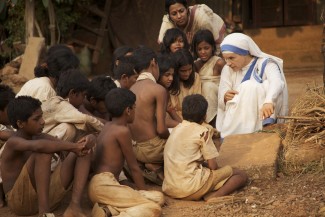 William Riead’s new film The Letters tells the life story of Mother Teresa through the lens of Benjamin Praagh (Rutger Hauer), a Vatican priest postulating her sainthood. In the film, Praagh visits India a year after Teresa’s death to speak with Fr. Celeste Van Exem (Max Von Sydow), her close friend and spiritual guide. Their conversation, along with the titular letters that Teresa sent to Van Exem over a period of nearly fifty years, sets the stage for the film’s portrayal of Mother Teresa.

Utilizing these letters offers a powerful narrative structure, as the audience gets the privilege of interpreting Teresa’s journey through her own words. In “The Letters,”  we find the portrait of a woman who, though viewed as saintly by the rest of the world, struggles nonetheless to do God’s will as she faces opposition from her Mother General, the community she seeks to serve, and even her own feelings of isolation and spiritual doubt. Yet through it all, Mother Teresa does not abandon her cause, instead pressing onward to answer what she refers to as “the call within the call,” working for and with marginalized communities like the poor, sick, and homeless.

The weight of the film rests on Juliet Stevenson’s shoulders, whose portrayal of Mother Teresa captures the human and saintly elements of Teresa’s journey perfectly– she allows the audience to peek behind the curtain, so to speak, at Teresa’s personal struggles, while also making sure that we never lose sight of the overall grace and holiness of her character. She flawlessly captures this dichotomy within Teresa, and draws the audience into a deeper understanding of the saint-to-be as a result.

On that front, The Letters could not have arrived at a better time. Given the recent announcement that Mother Teresa will be declared a saint this September, 19 years to the day after her death in 1997, many people are searching for ways to learn more about her story. Hopefully, this film will be at the top of their lists, as it skillfully balances Mother Teresa’s saintliness and her humanity. Mother Teresa’s story reminds us that even though a person may appear to be effortlessly caring, selfless, and holy, to serve God and to serve others is not always an easy task. For many, sainthood (and saintly behavior) implies an inherent state of grace that would seem superhuman, but Mother Teresa’s story shows us that even saints face moral struggles as any other woman or man might.

Mother Teresa did not see herself as a saint– as Benjamin Praagh states in one of the film’s closing lines, “to her, she was just a servant of God.” It’s a humbling message, and one that each of us can keep in mind when we face our own spiritual struggles. The Letters, in amplifying this message that is so integral to Mother Teresa’s work, reminds us that like Teresa, we each possess the capacity to create change and inspire those around us, to serve God and one another.