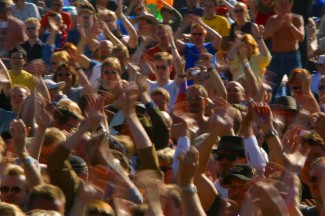 If you’re like the rest of the American public, there’s a 20 percent chance you’re not affiliated with a church right now. One-fifth of the general population — and one-third of millennials under 30 and Gen Zers — say they don’t identify with any particular religion. This puts “nones” at their highest level ever, according to the Pew Research Center’s Forum on Religion and Public Life.

But could spiritual impulses also be embedded in the secular rituals of modern life? A run of recent studies and think pieces in the New York Times, Washington Post, and elsewhere suggest yes. Even with church playing a smaller role in our collective life, we may still feel certain longings and desires, seek something bigger than ourselves, and strive to become better people. We may simply be following those tendencies in new ways.

Consider these features of contemporary society, from entertainment to education to fitness. Are they somehow feeding the spiritual impulses that once drew more Americans to places of worship?

TED talks: Featuring “ideas worth spreading,” TED talks on technology, entertainment and design started way back in 1984. But in the age of YouTube, they’ve really taken off, recently reaching their billionth view. Author Megan Hustad recently wrote a New York Times op-ed calling out “the cadences of missionary zeal” embedded in TED talks.

Hustad takes that as a negative, citing “airy promises” and a “buffet-style approach to moral formation.” And it goes beyond TED, she says — her friends who’ve declared themselves religion-free “spend many nervous hours assembling authority structures and a sense of righteousness by bricolage and Fitbit, nonfiction book clubs and Facebook likes.”

RELATED: God As My Improv Partner

CrossFit: A demanding workout regimen, Crossfit is so all-consuming that it has its own terminology and has been (teasingly, at least) called a cult. A “WOD” is Crossfit-speak for Workout of the Day, and one Connecticut gym’s motto is actually “In WOD We Trust.” Crossfitter and seminarian Ragan Sutterfield sees parallels between her church and her gym, as she wrote for The Washington Post.

Sutterfield views that as a positive, arguing that places of worship could learn from this fitness craze: “In an age where many are opting out of organized religion, CrossFit provides a rare place of community and holistic transformation. It may not be religious institutionally, but CrossFit does a better job than many religious communities in transforming people’s lives.”

Rock concerts: The fans eagerly facing the stage. The singing along. The arm waving. The flashing lights and fog machines. The splashy projection, orchestrated sound and subtle cues to be entirely in the moment. These elements can come together to raise strong emotion in a crowd. You’ll see them both at concerts and at church services, especially contemporary-style ones. Whether churches have borrowed tricks from rock shows, or rock shows generate worshipful behavior, the similarities are pronounced, as evangelical projection specialist Stephen Proctor says in a post titled “The Liturgy of the Rock Concert.”

Apple products: It’s not news that fans of Apple, as well as other tech brands like Facebook, could be called “devoted.” But how much so? The makers of a BBC documentary called “Secrets of the Superbrands” sought to find out. They had a brain scan done on World of Apple editor Alex Brooks. The neuroscientists who analyzed the results had previously studied religious believers’ brains.

The scientists’ pronouncement: “The Apple products are triggering the same bits of [Brooks’] brain as religious imagery triggers in a person of faith. This suggests that the big tech brands have harnessed, or exploit, the brain areas that have evolved to process religion.” Granted, it’s a single example, not a large-scale study — but the finding is certainly provocative.

Toasting: Beginning a meal prompts many folks to say something in honor of … someone. Historically, that’s been a prayer of thanksgiving to God. A modern alternative often seen is toasting, which gives people a moment to recognize and honor the specialness of the moment and people around them.

Some people are even composing family-appropriate, no-alcohol-required toasts, as in this popular Offbeat Families blog post by Helen Jane Hearn. “I’ve been on the lookout … for non-religious-pre-dinner thank you’s that bring in the food, the animals, the vegetables and the community we’re going to share, and I’m coming up short,” she says. “All the pre-meal graces seem to be very religious. And that doesn’t quite meet my needs.” She’s arrived at “secular grace” and is explicit about replacing “capital R religion” and wanting to thank someone besides God (like “Ms. Earth”) for the meal.

What do you think? Do these facets of modern life ring true as filling spiritual longings, or is this a stretch? Do any other examples come to mind?