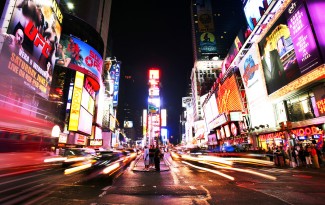 I’m not one of those really proud annoying Texans who thinks Texas is better than every other state. But I am one of those annoying Texans that doesn’t know much about the rest of the country because I’ve lived in this huge state for so darn long. So when I think of New York City, most of my stereotypical assumptions come from either Friends or Seinfeld. That being said, you can imagine what I was anticipating when Brandon and I scheduled a vacation to New York City when Olivia was just six months old.

Brandon had a conference to attend all week and Olivia and I were staying with my best friend from high school who lived in the city. I was so nervous. If you know me at all, you know that I am pretty much the opposite of New York City. New York is big bright lights, fast-paced, hard-nosed. I am pretty much the slowest walker that you’ve ever met, laid-back, and definitely not a “tough guy.” Especially with Olivia in tow, I was dreading how rude people were going to be because I was going to be moving extra slow. Even with all the anxiety, after six months with a baby, I was ready for our vacation adventure so off we went.

Strangely enough, this was probably one of the best trips we’ve ever taken. Having a baby in the city gave me a unique insight into the hearts of New Yorkers.

Brandon went off to his conference and I set out with Olivia strapped to me. Obviously, we rode a lot of public transportation. Every single time, someone gave up his/her seat for me since I was carrying a baby. I was floored. I was ready to be pushed around and given mean looks. These hardened New Yorkers were giving up their seats for me — an obviously wide-eyed, naive tourist. How weird. But nice.

And every time I was stopped in front of a map to figure out which train I needed to catch, it would only take seconds for someone to ask me if I needed help getting somewhere.

Watching out for one another

If there is one thing that Jesus commanded more than anything else it was to take care of our neighbors. And New Yorkers do exactly that. It was their own kind of radical hospitality. People weren’t gushing over us or tripping over themselves to help us but they helped. Every time.

Later when I was talking to my friend, I told her how puzzled I was that people were being so nice to us. She explained to me how different New York hospitality was from Southern hospitality. Living in New York City is hard. Everyone that lives there knows that and is secretly watching out for everyone else because they’ve all been in that vulnerable situation before.

While the goal of our trip was just to get some fresh air and maybe eat at some good places, I really feel like I had a spiritual encounter with the people of New York. I was privy to a part of the city that I would have never known existed — its hospitality. It’s not a warm kind of hospitality. There’s no small talk. There are no smiles. People just see that you need help, they help, and then they pretend like nothing happened. Everyone is secretly looking out for everyone else without letting down their icy, don’t-mess-with-me guard.

And what especially struck me was that the people helping me spanned all classes, ethnicities, ages and English-speaking abilities. I don’t remember every single person that offered me their seat but I do remember a middle-aged, nicely dressed white woman; a Hispanic teeny-bopper with a Bob Marley necklace and a crazy strong Brooklyn accent; and an older Indian man who barely spoke English. Seriously, everyone was willing to give up a seat. The second I got on a subway train, all the people standing would start looking at the people sitting to see who was going to get up for me. Like if no one was going to get up right away, the people standing would stare them down until someone did.

One day we got caught in a really bad snowstorm and we ducked into a tiny grocery store. We were blocking the entrance and getting the floor all dirty with muddy snow. I really thought the owner was going to yell at us to get out, but he didn’t. He looked at us, looked at Olivia, and ignored us. God bless him for not throwing us out into the storm.

If there is one thing that Jesus commanded more than anything else it was to take care of our neighbors. And New Yorkers do exactly that. It was their own kind of radical hospitality. People weren’t gushing over us or tripping over themselves to help us but they helped. Every time. Don’t get me wrong, we still got pushed around a bit and had to be aware of our surroundings, but New York City was not half as scary as I thought it was going to be.
Thanks New York City, for having our backs.