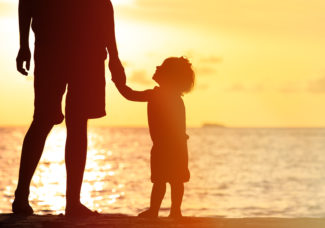 I have a morbid fear of the ocean. I am not now nor have I ever been (nor, in all probability, will I ever be) a strong swimmer. Also, I am unilaterally opposed to entering any body of water the murkiness of which prevents me from seeing my own feet or the subaquatic creatures most likely poised to wreak all sorts of mischief on my unshod, obscured tootsies. I do, however, love being near the ocean. I love the sound, the smell, the vastness, the mystery, the treasures it reveals as it lifts the veil of the tide again and again. When it came time for us to embark on our first family vacation, we headed to the Delaware shore.

I will take the liberty of assuming that you have never traveled close to five hours in a four-door sedan with three children under 4 years of age. To surmount such a journey without major difficulty, meltdown, or severe psychological and physical harm to any party involved requires the following: Snacks. You must have an overabundance of snacks to throw at the people in the back seat. Put even more snacks in the trunk. In prolonged car seat captivity, the average baby human requires exponentially more snacks per hour than their counterparts free to roam in their natural habitat. Toys. You will need enough toys to occupy 20 children for a full week. The trick here is to take them out one at a time. Avoid those predisposed to being turned into projectiles, swords, or means of escape. Clothes. Each little person in your entourage will require no less than three complete changes of clothing. Just for the drive there. I’ll spare you the gory details. You’ll have to trust me on this one. Diapers. Enough said. Boring grown-up words. Come up with a few key topics of conversation that are unfailingly boring to small children. Try talking about the Gross Domestic Product, the political history of Western Europe or the major points of contention at the Council of Nicaea. Avoid using the words princess, ice cream, playground, fun, or hippopotamus at all costs. Careful use of this technique can result in prolonged napping.

All this is to say that planning, provision, and anticipation of all of the craziness that could possibly ensue is my particular parental forte. I like to be sure that everybody has what they need to feel comfortable and (relatively) happy. I like, in perfect Mary Poppins-esque fashion, to be able to produce from my bag whatever the moment requires. I like to keep tabs on everyone. I like to feel like the situation is under control.

So, when we finally arrived at the beach it should come as no surprise that I organized towels, snacks, and drinks, busied myself with making sure nobody ate sand (or induced anyone else to eat sand), slathered every square inch of everyone in SPF 100 sunscreen, and gave a spirited address about the importance of NOT going near the water, which featured such toddler-friendly phrases as “rip current,” “rock jetties,” and “rogue waves.” Shovels and buckets were produced and castle building commenced. All was as it should be.

And then there was Daddy.