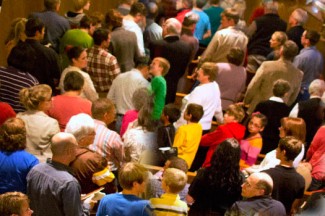 Imagine walking into Sunday Mass and finding an extra 500 people crowded in the pews and spilling into the aisles. No, it’s not Easter. It’s a Mass mob.

The concept is taken from the popular flash mobs that invite strangers via social media (sometimes hundreds, thousands, even millions!) to participate in a group action. Flash mobs range from choreographed dances in public places to marriage proposals.

Mass mobs were created to intentionally invite strangers to attend Mass at a designated church. Beginning in Buffalo last November, Mass mobs have spread across the country to churches in Philadelphia, Cleveland, and most recently Detroit. The Mass mobs in these cities happened in older churches with the intent to boost attendance, if even for one day.

People attending Mass mobs are drawn to a parish for different reasons. Some may have attended elementary school there. Others have relatives who were married in that parish. A few are drawn to church architecture that marks a different era when some Catholic churches were constructed in the Gothic style. Mass mobs might be encouragement for former neighborhood residents or even former parishioners to make a visit to a place they once considered home. No matter the reason, Mass mobs are a great way to visit new churches and see different parts of a city.

Mass mobs are also a unique way to experience the liturgy. First, participants may help choose which church to visit by voting online, and then they themselves can help promote the experience. This is where social media and technology really help spark something unique. You never know who will show up until that day. It’s exciting and organic in a way that many young adults appreciate. And it leaves you wondering who will attend and what church will be next on the mob list. Given the way social media works today, I would not be surprised if a Mass mob was heading your way.

In some ways, I think Mass mobs are comparable to when Jesus fed the 5,000 or so who unexpectedly followed or “mobbed” him. In Matthew we read that Jesus had fled in a boat for some down time, and before he knew it thousands had assembled to meet him as he came ashore. Word somehow spread like wildfire in the days before Facebook, Twitter, and hashtags. Jokingly, I would have assigned the hashtag of #CrowdTheBoat or maybe #JesusMob to the crowd of 5,000 back then. The people who gathered on the shore shared a meal made from five loaves and two fish. Today, those coming to a Mass mob share a meal, specifically gathering to experience the Eucharist.

I like to wonder what would have happened if the people during Jesus’ time actively used Facebook and Instagram. I wonder, given the speed of communication these days, if the feeding of the 5,000 would have turned into the feeding of the 50,000. I can see the post now of Jesus’ boat on Instagram with #FollowMe or #NoFilter hashtags. If it was you #JesusMob back then, it might have been wise to grab a selfie with Jesus to prove to others you were there.

The crowd gathered to see Jesus because people had heard about the miracles being performed. They had to see these things for themselves. Perhaps they were drawn to Jesus’ empathy and ability to really connect with people. Maybe some were just plain curious.

Mass mobs invite the curious today much like the curious came to hear Jesus preach and perform miracles. Whether it’s Mass mobs or flash mobs, people are hungry for what comes next. In today’s terms, we know very much what comes after receiving the Eucharist. There’s a sense of fullness or even a little inner peace. A Mass mob sends people away feeling excited about a church experience and more importantly, renewed in their faith.