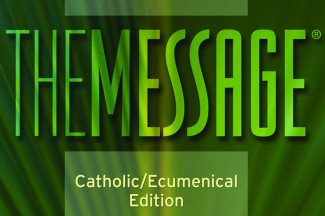 Let’s face it: The Bible can be an intimidating read. After all, it’s a compilation of texts written 2,000 to 3,000 years ago in Hebrew and Greek. It’s full of strange metaphors, unfamiliar references and baffling context. Plus, the English we have translated it into is often stilted or archaic. Sadly, the most common translations of the Bible aren’t always “accessible” to most people without graduate degrees in scripture. So, even when someone is looking for moral guidance or spiritual sustenance and really wants to read the Bible, it is easy for them to give up on it.

But what if the Bible spoke like we do? Biblical scholar Eugene Peterson took it upon himself to write a translation that would do just that. He said, “I hoped to bring the New Testament to life for two different types of people: those who hadn’t read the Bible because it seemed too distant and irrelevant, and those who had read the Bible so much that it had become ‘old hat.’”

In the 1990s, he began carefully paraphrasing the Bible from the original languages into English. The result was The Message: The Bible in Contemporary Language, which has sold more than 16 million copies. A Catholic/Ecumenical Edition was released in 2013.

Turning Around: Daily Lenten Reflections with the Message by Ann Naffziger. In this day-by-day booklet you will find short passages from The Message: Catholic/Ecumenical Edition combined with Ann’s insightful reflections and practical action steps for your Lenten journey this year.

The Message seeks to “talk like we do.” Real people talk in idioms — and so does scripture — but much of that gets lost in the academic translation process. So, for example, instead of hearing Paul say:

“And I am giving counsel in this matter, for it is appropriate for you who began not only to act but to act willingly last year: complete it now, so that your eager willingness may be matched by your completion of it out of what you have.” (2 Corinthians 8:10-11, New American Bible)

So here’s what I think: The best thing you can do right now is to finish what you started last year and not let those good intentions grow stale. Your heart’s been in the right place all along. You’ve got what it takes to finish it up, so go to it.

Peterson meant this to be a “reader’s Bible.” It’s not intended for liturgy or serious academic study. Instead, The Message is something you might keep on your nightstand to get some inspiration, hope or challenge for the day ahead. It’s something you can grasp easily on your daily commute instead of scratching your head over some of the dense wording of St. Paul’s letters.

The Message speaks to people who have been turned off by the stiff language of other Bibles but are searching for a spiritual center that they can understand in modern-day American English.

Of course, plenty of people have a great love and respect for the common translations of the Bible. For them, the value of The Message might be in jarring them out of their familiarity with well-known texts. This was the case for me as I wrote a booklet of Lenten reflections using this translation. To be honest, I wasn’t keen on giving up my favorite Bible (New Revised Standard Version or NRSV) to do this. Call me a scripture geek, but I have grown to love its language.

What I didn’t realize was that the Bible had become so familiar to me that I was reading right past the direct challenges of Jesus, without really taking them to heart anymore. Of course, I remember that Jesus taught love for our enemies. But The Message sounded a wake up call to me:

“I’m telling you to love your enemies. Let them bring out the best in you, not the worst. When someone gives you a hard time, respond with the energies of prayer, for then you are working out of your true selves, your God-created selves.” (Matthew 5:44-45)

Ouch! Immediately, I thought of a couple of people with whom I had not been acting very maturely and to whom I owed some prayer.

That’s how it went, over and over, as I read and prayed along. What probably sounded extremely urgent and attention grabbing to Jesus’ original audiences had somehow gotten watered down for me because of its familiarity. Unexpectedly, the freshness of this Bible woke me up so that I couldn’t dismiss or ignore Jesus’ radical calling as easily as I had before.

So, what if the Bible spoke like we do? Many more people would read it, and, I believe, pay attention to its message.

To bring offerings is useless;
incense is an abomination to me.
New moon and sabbath, calling assemblies —
festive convocations with wickedness —
these I cannot bear.
Your new moons and festivals I detest;
they weigh me down, I tire of the load.

When you spread out your hands,
I will close my eyes to you;
Though you pray the more,
I will not listen.
Your hands are full of blood!

Wash yourselves clean!
Put away your misdeeds from before my eyes;
cease doing evil;
learn to do good.
Make justice your aim: redress the wronged,
hear the orphan’s plea, defend the widow.

When you put on your next prayer-performance,
I’ll be looking the other way.
No matter how long or loud or often you pray,
I’ll not be listening.
And do you know why? Because you’ve been tearing
people to pieces, and your hands are bloody.

Go home and wash up.
Clean up your act.
Sweep your lives clean of your evildoings
so I don’t have to look at them any longer.
Say no to wrong.
Learn to do good.
Work for justice.
Help the down-and-out.
Stand up for the homeless.
Go to bat for the defenseless.