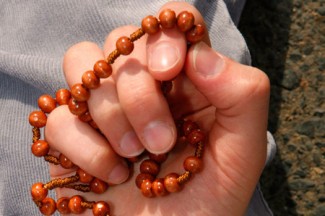 Mary was very perplexing to me before I became a Catholic. She was like some unnamed bird that I could not see and did not know, perching in a tree nearby. I knew she was there — I also knew she was important to some people, but I had no idea why.

Even after coming into the Church, I struggled with my beliefs about Mary: Did I believe in the Virgin Birth? Was that even important? Wasn’t it odd that the Church insisted on Mary’s continued virginity (poor Joseph!) when the Bible clearly represents Jesus as having brothers and sisters? Was she some kind of holy gal I could never emulate or was she more powerful, more funky and more earthy than I could possibly imagine?

I didn’t come to Mary until the tires of my family life hit the road when one of my loved ones suffered a serious illness. In my grief and distress I was prepared to invoke any help I could get, and made a small altar atop a bookcase in the bedroom. On it I put a small figurine of Our Lady of Guadalupe, which was a gift from my family during happier times. Accompanying Mary were other protective figures: a carved Santos of my favorite St. Francis; two small angels; and pictures of my parents, who I prayed were also watching over us.

At night I would light a candle on my altar and pray the Memorare, asking Mary to please take care of my loved one, to protect her from harm. And damned if I didn’t receive a direct infusion of mother love every single night when I prayed those ancient words… “never was it known that anyone who fled to thy protection was left unaided.” I would rise up from prayer feeling strengthened for the day to come.

Giving the rosary a try

As I was learning to give my beloved into the hands of Mary, I decided that praying the rosary might be a good thing to do — heartening and all of that… One day I was stunned to realize, “Wow, those are the words of the Angel Gabriel that I am repeating!” As Mary opened her arms to a future she could not know — which she learned would wound her terribly — I was able to open my arms to an uncertain future instead of clenching them around my body to ward off tragedy.

As I was learning to give my beloved into the hands of Mary, I decided that praying the rosary might be a good thing to do — heartening and all of that. I read a little booklet describing the Mysteries — “Sorrowful? Nope, not this time. Luminous? OK, that sounds good.” But my favorite was the Joyful Mysteries, where I walked with Mary in the early days of her pregnancy. One day I was stunned to realize, “Wow, those are the words of the Angel Gabriel that I am repeating!” As Mary opened her arms to a future she could not know — which she learned would wound her terribly — I was able to open my arms to an uncertain future instead of clenching them around my body to ward off tragedy.

Every night I crept into bed clutching my rosary and began to slip the beads through my fingers, saying the words silently, feeling almost as if I was floating on a choppy sea and the rosary was a lifebuoy. The images swept through my mind, taking me away from my current situation and putting me with Mary, and Jesus and Joseph and the rest of their companions, on their mysterious journey. Eventually, my frightened chatter would still and I’d sleep with the beads in my hand and holy words in my mind.

I still say the rosary nightly. This year I prayed the Sorrowful Mysteries on Good Friday kneeling by my bed and was astonished to find tears streaming down my face as I walked — in my imagination — with Jesus on the Via Dolorosa. It was almost unbearable because I saw and felt so much. But I did it. With His help.

Do I want to join a rosary group? Nope, not my thing; I find chanting these prayers with others to be distracting. But that is just my weird little soul and personality. Do I have a rosary bracelet that I wear when I go to the dentist? Yes, indeedy do. Recently, as my dentist pried at various bicuspids (why do they give it the elevated name of “crown” as if we were being rewarded?) I fingered the small silver roses on my wrist rosary and found calm in the midst of drilling.

In the book How God Changes the Brain, authors Andrew Newberg, M.D. and Mark Robert Waldman direct us to a meditation where you chant syllables, moving your fingers in time to the sounds. The scientists’ research has found (surprise, surprise!) that sacred words with hand motions calm the brain and emotions and increase one’s attention span.

I expect St. Augustine could have told them that, or Thomas Aquinas. I expect the good sisters who work in dangerous parts of the world, putting their lives on the line, know about the strengthening and calming effects of the rosary. As for me? I’m avoiding a rosary ring, which just isn’t big enough to do the job. I’ll continue to sling my set of beads over the headboard, ready to comfort me when my sleepy fingers reach for them as night draws in, ready for Mary to buoy me up on the choppy seas of my life.