Alex’s Pick: “You’re Turning Into John Wayne” by Twin Atlantic
Twin Atlantic is an alternative rock quartet hailing from mighty Scotland. At first listen the song seems like an attack on American culture, when in fact the group is preaching a much different message. The band speaks about staying true to where you came from and not imitating something else — “Now here’s a great Scottish theory / Have you lost your latitude and longitude?” This message is reflected in the music video as well. The band had just been signed to a major label and was being sent to America to tour for a year. In the video, they are trapped inside of a display window — an act for everyone to see. They’ll be in a foreign place for a long time (hence the snow and Christmas tree hurling) and fear that they will lose their Scottish roots and identity.

So this summer, be proud of your hometown, your country, and your family. Don’t spend the next few months pretending to be something you’re not, and never forget where you came from. If you dig the heavy Scottish accents and rocking out, you can catch Twin Atlantic at the Vans Warped Tour this summer.
Alex Ponchak is a Busted Halo intern.

Amy’s Pick: “Good Time” by Carly Rae Jepsen
There is no denying the star power of Carly Rae Jepsen after her rise to popularity with the number one single “Call Me Maybe.” Owl City rocked the radio waves during the summer of 2009 with his platinum hit, “Fireflies.” Now, the two have paired up for a duet entitled “Good Time.” From the cover art to the title to the fun and carefree attitude, this pop song is sure to be the song of the summer!

The track is fun, upbeat, and will have you dancing in no time. A pop tune just as catchy as Jepsen’s last hit, “Good Time” may get stuck in your head. Luckily, the lyrics are simple and repetitive, and the storyline is uncomplicated. The song focuses on two people being spontaneous and having fun all summer long. Anyone can relate. The album artwork depicts a lazy, hot summer day on the beach. “Good Time” will be a staple on your summer playlist. Just like the title says, it’s a “good time!”
Amy Snopek is a Busted Halo intern.

José’s Pick: “High Hope” by Glen Hansard
If I could, I’d choose an Ataris song for my Song of the Summer because I’m trying to bring the Ataris back. That’s not looking likely, especially because nobody else has joined my crusade. So I’m choosing “High Hope” by Glen Hansard, the star of Once, one half of The Swell Season, and the most powerful example in my mind of what it means to wear your heart on your sleeve as a musician.

This song is walking on the beach at dusk, or swinging in a hammock at twilight, or watching the final rays of the sun peek over the horizon as it paints the sky before night begins to fall. “High Hope” is rolling the window down on a warm August evening as you cruise down the highway and letting the chorus enfold you in its sound and warmth. This song is summer because you don’t want it to be over — it’s that good. But at the same time you know that’s the only way it can stay sweet: by being short. And, like summer, this song is served best with a cold drink.
José Martinez is a contributor to Busted Halo.

Phil’s Pick: “Wide Awake” by Katy Perry
Her documentary concert film, Katy Perry: Part of Me, was released 4th of July weekend and she headlined Macy’s fireworks show, so I’m declaring this the summer of Katy Perry. No one in recent years is more perfectly associated with summer songs than this smart, beautiful, faithful woman, and the cumulative effect of the movie, her megahit “Part of Me,” which is still in the top 40, her current top 10 hit “Wide Awake,” and the recent chart reentry of the extraordinary “Firework” adds up to Katy Perry domination. Which is nothing new for her. She’s the only artist to spend more than 52 consecutive weeks in the top 10, and she’s still there now, at 70 weeks and counting. She’s also the only artist besides Michael Jackson to have five #1 songs from the same album (and “Part of Me,” which is disqualified because it’s from a rerelease, would have put her at six.)

If you’re not a fan of pop music, I’m not expecting you to like her music because of these facts, but I do suggest you respect her. So many pop musicians are edgier artists struggling with and against the medium. This can result in brilliant work. But the thing about Katy Perry is that she is, if anything, more wholesome than her image. She was raised by two Pentecostal preachers and began as a Christian Contemporary artist. People love a “good girl gone bad” story and want to spin her move to secular music and relationship with Russell Brand that way, she says, but the truth is her parents love and support her, and she is as innocent as her songs. That’s what makes them so effective: Katy is sharing her authentic experiences of growing up and discovering the world — which came late because of her sheltered upbringing. Cynics want to complicate things, but Perry sincerely wants to make people happy and offer them a little inspiration and encouragement. And she does it beautifully.
Phil Fox Rose writes the What Works column at Busted Halo.

Mike’s Pick: “A Beautiful Day” performed by India Arie
At times, we can all grow quite cynical and find ourselves thrust into thinking that life holds little or no meaning beyond the rat race at work. A friend recently posted a picture on her Pinterest wall that said, “You’re only one workout away from a good mood.” It reminded me that I needed to get back to the gym after a short respite from my attempt to drop some weight. Sure enough, the doldrums began to lift with each exercise. I was reminded of how each person in the gym is trying to eclipse another goal. Often we forget how wonderful it is to feel alive and to be able to push ourselves just a bit farther than we think we can go. Gratitude is one of the major tenants of the Catholic faith. So as I run, lift, pull, and stretch, I start my day with this song to remind me of how grateful I am to simply be a child of God, living one more day to the max.
Mike Hayes is co-founder and senior editor of Busted Halo.

Joe’s Pick: “Somebody That I Used to Know” by Gotye
Although Gotye’s “Somebody That I Used to Know” is actually a song from the summer of 2011, I think I can include it here since it was released in the United States this past January and remains a popular hit that people continue to talk about. Sure, it’s catchy and has a great video, but what I like most about the phenomenon of this tune is a certain three-part presentation with which I was first introduced to it (one that many of you out there may already know about). Do yourself a favor and be entertained for the next 12 minutes by first watching the original video, then this unique conceived cover version by the band Walk Off the Earth, and finally this hilarious parody of the cover by The Key of Awesome.
Joe Williams is the production editor of Busted Halo.

Tom’s Pick: “Learn Me Right” by Birdy and Mumford and Sons
One of my nieces has jumped into the ocean of Disney Princesses. While there’s not anything necessarily wrong with Ariel, Cinderella, and Sleeping Beauty, the part of me that sees her doing great things as she gets older was hoping she might encounter a wider diversity of cartoon role models.

Disney and Pixar’s latest princess movie, Brave, tells a very good story, but the surprise came when one of the main songs from the film began to tap me on the shoulder. As someone who has just finished six years of training in an effort to “speak from tongues of old and spit out holy words,” the lyrics to “Learn Me Right” have been providing me with a musical reminder to, as another wise person might say, “check myself before I mess myself.”

The one thing about priesthood is that, rightly or wrongly, you are given a lot of power. People (for the most part) listen to what you have to say, offer encouraging words, and let you into the deepest recesses of their souls — all this without any reference checks. Usually this works out for everyone’s best interests. But there are situations when, if the priest fails to listen to the better angels of his nature, sadness will not be so far away.

So a big part of seminary was spent coming to terms with the fact that there continues to be times when “my judgment burns in the black of night.” I need to be reminded that, while we all aspire to fulfill our dreams and be free, “when I give less than I take, it is my fault my own mistake.” That there will be times when I will need to be sat down “and told that I’m weak.”

These are ideas that I hope my niece appreciates someday as well. 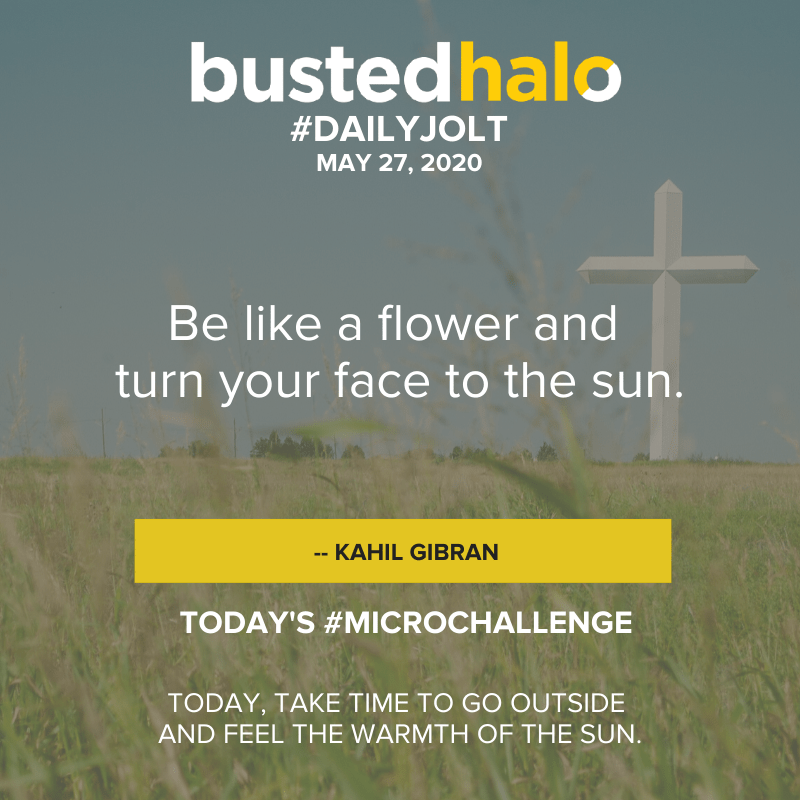