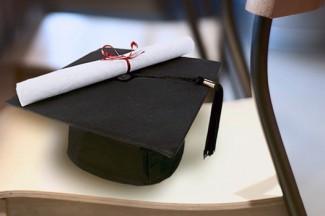 Exactly one year ago, I was in the middle of a 40-day Facebook fast for Lent. Naturally, I found a new obsession: compulsively checking my email. It was the final step in a long process. The test was taken, websites combed over, e-applications submitted, and emails with an “.edu” extension opened immediately. Now, it was time to decide where to go to graduate school.

I did the “safe” thing and applied to a lot of schools (eight, in fact). I wasn’t sure if the admissions staff would buy my story: Theology and psychology undergrad major who taught English for three years, worked for an economics department for two, and then decided to pursue … public health? Of course, it all made sense to me. Was it going to make sense to them?

Apparently, it did. I found myself deciding between eight schools with varying amounts of money in their respective financial aid packages. I went from not even expecting to have options to having many options.

Now, I need to pause: I really struggle with making decisions. Really struggle. I stand and stare at the top of my pantry for at least five minutes trying to decide which box of cereal I should open next. What do I feel like eating? Do I want sweet or fiber? Am I going out of town for an extended period of time? Will I finish the almond milk before then? At this point, you’ll be glad you aren’t my roommate. You’ll be glad later on, too.

You’ve been to undergrad. You know how brochures and websites work. Go there. Meet people. Walk around neighborhoods. It will help you decide. When I visited the school I now attend, I remember calling my mom on the way to the airport and saying, “Mom, I LOVE it.”

So, to decide where to go to grad school — where to spend the next two years of my life, where to make new friends, where to create new networks, where to learn from new professors — was a big deal to me. It was a bit of a dramatic process (in case the cereal example didn’t tip you off); my final decision made with less than 24 hours to decide. My roommates suffered quietly through the whole ordeal. But, I learned a lot along the way. After all, isn’t this about discernment?

Hopefully you can gain something from these six pieces of advice from a tortured decision maker:

#1 — Go there. I know, money is tight (especially after paying for applications and taking the GRE multiple times!), but try to visit the schools you are seriously considering. You’ve been to undergrad. You know how brochures and websites work. Go there. Meet people. Walk around neighborhoods. It will help you decide. When I visited the school I now attend, I remember calling my mom on the way to the airport and saying, “Mom, I LOVE it.”

#2 — Are they talking about things you want to talk about? Examine the curriculum. Sit in on a class if you can. Are they talking about issues that interest you? Sure, there are things in my major I’d rather not talk about — like SAS, the statistical analysis program — but for me, the social justice issues were huge. Are the topics you’re interested in part of the classroom discussions?

#3 — Where you study matters. Where is the school you’re considering located? What kind of practicum or internship placements does it have? What type of networks will you tap into that might lead to a job there or elsewhere? This isn’t true of all fields, but if you are considering a program that will eventually involve working directly with communities, consider the context. I visited schools that looked like slices of heaven with rolling hills and sunshine amuck. However, there simply weren’t a lot of the people I wanted to work with around. I eventually decided I needed to learn my field in an urban setting.

#4 — Listen to the opinions of the people who know you best. Back to my poor roommates. All along, they knew exactly where I was going to go. When I finally told them in what I thought would be a dramatic big reveal, they looked at me like I had told them something they had known for years. Sometimes we get so wrapped up in a decision, we forget to stand outside ourselves and look at who we are. Roommates, friends and significant others are good for that.

When I was down to the last five days of making a decision, I still didn’t know. I did the best thing I could think of: phone a Jesuit.

#5 — Phone a Jesuit (or your spiritual director). When I was down to the last five days of making a decision, I still didn’t know. I did the best thing I could think of: phone a Jesuit. I called my friend Chris and lamented. Chris, in his Jesuit wisdom, suggested a technique that Jesuits use when discerning. “Okay. So, decide, tonight, what school you’re going to go to. You might not actually go there, but decide you’re going to go there. Wake up tomorrow and tell yourself and other people I’m going to XYZ school. See how it feels. Are you excited to tell them? Does it feel right?” (This simple conversation is my entire basis for wanting to start a Jesuit help hotline for everyday woes.)

#6 — Talk with God. That night, I told God I was going to go to XYZ school, and unless something happened in the next five days, I was going to go to that school. I gave God an ultimatum. It was a very kindergarten-theology-type move, I admit. But hey, I was desperate. The next day I woke up with a thought: Whatever happened to ABC school? ABC school had a late application deadline and hadn’t sent an admissions decision yet. Maybe I should give them a call and just see what’s up. That call, literally, changed my life.

So, there you have it. My best advice. Oh wait, I forgot something: you’re going to do great wherever you go — you can’t make a wrong decision. I was often told this but never really believed it. Now, I do — for two reasons: one, there are a lot of great schools out there; and two, God is in this decision. Knowing that, you can’t go wrong.

This story has a happy ending. I love where I’m at, who I’m with, and what I’m doing. You will, too.