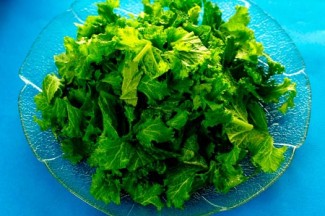 Let’s get one thing clear: I like the taste of meat. I like double bacon cheeseburgers. I like steak so rare it moos. On Thanksgiving I want turkey, on Christmas I want ham, and on my father’s birthday I want meatballs made from my family’s off-the-boat-from-Sicily recipe, so good they take five hours to make and five minutes to eat. So imagine my family’s reaction when I came home for Mardi Gras break my freshman year of college and announced that I was giving up meat for Lent and possibly forever.

“More veal for me!” said my younger brother.

“What are they teaching you at that school?” said my dad.

“That school” was a Jesuit college, and my decision to go veg confirmed my parents’ worst fears about Jesuit colleges. They sent me to Spring Hill like a lamb among wolves, hoping that I could teach those pagan Jesuits something about being Catholic. Yet here I was, six months later, apparently going native.

The visions my folks were surely having of Spring Hill College — think 1984 run by PETA propagandists — are unfounded. Nevertheless, I did come to vegetarianism through not one but two college classes (both, incidentally, taught by meat-eating Jesuits). In my Asian history class, we studied animal-friendly religions like Hinduism, Buddhism, and Jainism, and in ethics we discussed utilitarian arguments in favor of animal rights.

But while secular ethics and Eastern religions triggered my decision not to eat meat, Christianity was my true motivation. At the same time that I was taking those courses, I was also attending weekly adoration and daily Mass, feeling closer to God and to God’s compassion than I had ever felt before. I was awash in love and gratitude. I wanted to extend the blessings I felt to the suffering around me — whether or not those suffering were of my own species. The first time I bypassed the chicken tenders and reached for the carrots and green beans, I did so with the conviction that I was answering God’s desire for mercy (Hosea 6:6, Matthew 9:13).

The connection between my Christianity and my vegetarianism was obvious to me — less so to my Christian friends and family. “Jesus ate meat,” a friend at the cafeteria table said, apropos of nothing, as I partook of mashed potatoes and peas sans animaux. Of course, it’s worth pointing out that the meat Jesus ate didn’t come out of our inhumane factory farms.

“God says, ‘Have dominion over the animals,’” my mother quoted at me.

“‘Dominion’ is not the same as ‘barbecue sauce,’” I said.

Indeed, according to the biblical account of creation, God gave us “every seed-bearing plant all over the earth and every tree that has seed-bearing fruit on it to be [our] food” (Genesis 1:29). Not until the flood do animals appear on the dinner table (Genesis 9:3), making it reasonable to surmise that meat-eating is the mark of a fallen world. Isaiah echoed this idea in his depiction of the messianic age. He spoke of a peace so perfect so that even the animals will be vegetarians:

Then the wolf shall be a guest of the lamb,
and the leopard shall lie down with the kid;
The calf and the young lion shall browse together,
with a little child to guide them.
The cow and the bear shall be neighbors,
together their young shall rest;
the lion shall eat hay like the ox[…] There shall be no harm or ruin on all my holy mountain;
for the earth shall be filled with knowledge of the Lord,
as water covers the sea. (Isaiah 11:6-9)

I know what you’re thinking. “But militant vegetarians are so annoying.” Of course they are. Militant anything is annoying. But trust me: I’m claiming no moral superiority here. I can’t tell you how many times I reneged on my commitment to a diet free of sentient beings.

The first Thanksgiving after I turned veg, I managed to resist the turkey, the oyster dressing, even my favorite: stuffed mirliton dripping bacon grease and studded with ham and shrimp. The next day I casually opened the refrigerator door, congratulating myself on my consummate will power and dietary rectitude, when all of a sudden I found myself frantically making a turkey sandwich, ears on the alert for approaching footsteps, heart racing. I ran to my room, locked the door, closed the blinds, and huddled over my sandwich like a junkie. Someone knocked on the door. I jumped as if at a gunshot and threw my half-eaten sandwich into a drawer. “Come in,” I said, voice cracking with forced nonchalance. I might have been looking at a pornographic magazine.

Five years later, those kinds of cravings never hit me. The relish with which I ventured into vegetarianism — the relish of doing something I believed to be right, not because I was raised to, but because I arrived at a moral conclusion on my own — wore off long ago. Nevertheless, I continue to eschew eating critters, and my family and friends continue to give me good-natured flak, a pastime that never, evidently, gets old. However much my relatives rib me, I remain convinced that vegetarianism is a legitimate moral — and, in fact, Christian — practice. It’s also a frequently delicious one. Now, if you’ll excuse me, there’s some eggplant parmesan in the fridge with my name on it.