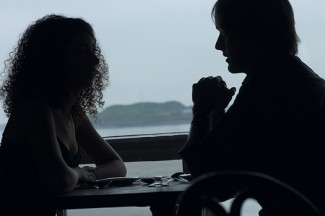 After graduation, mascara barely dry from losing the remaining ties to my old life, I joined my former professor’s weekly networking group. I had been working a freelance job designing a website for the summer, but that had ended, and I’d just had my first job interview since graduation. They offered and I accepted without thinking. Before I knew it, I was sitting at a desk in an office caked with dust, repeating the copy/paste function for nine hours a day.

I sat in a local café, beer in hand, and explained the first days of work to the group. I tried so hard to sound excited. “How much are they paying you?” everyone asked. My answer left them cold. I tried to tell myself that they didn’t know how bad it really was out there. I had tried for months just to get this one interview. I didn’t know what to do. The next morning I stood in the shower asking God why I was there and if I should stay. Like the Grinch, I felt hardened somehow. I couldn’t think of one reason to go back. I stood in my towel, still dripping, and wrote my first-ever letter of resignation.

By the end of the month, I had lived with two different sets of friends. By October I was working retail, the one thing I had promised myself not to do, and was living with a church parishioner. I did everything to stay in touch with my support networks, now making a habit of buying groceries on credit. I went to our weekly design chats knowing someone would buy me a drink and for a few hours I would feel like a person, not just a piece of paper. I lost my retail job the same day I was offered another short-term contract doing design work for a local ad agency. I took it as a sign that things were picking up and called my mom to tell her.

“That’s so great!” she trilled, by now practiced in the art of these calls, stuffed with fake enthusiasm. “Is there health insurance? How long will it last?” The now-dreaded questions. I had no idea. I never did. I began every freelance job with the silent prayer that it would become permanent and benefits would fall over me like confetti on New Year’s. I did the only thing I could — I put on my nicest clothes and got to work earlier than I was asked. I stayed later than I needed to.

I knew that things had to turn around soon or I’d be looking at more difficult decisions, so I went back to school. Community college. Because I needed the health insurance, and I could get back on my mom’s plan if I was still a student. Does that sound as pathetic out loud as it did then? I stopped dreaming about the full-size bed I’d wanted to replace my tiny twin since I was 15. It was beginning to sink in that I was no longer in control of my life and it had nothing to do with money.

Alex had been a friend of mine throughout my sad state. I knew I could count on him to lift my spirits. I met him for coffee one day because I wanted to hear about his impending graduation. Alex planned to start a year of service that summer. I of course admired him greatly — Alex was always doing the most selfless things, and I felt a deep envy come over me. Here was Alex, taking control of his life, traveling across the world to become a volunteer while I selfishly wallowed in how nothing had gone the way I wanted.

I asked Alex, “Is it possible to serve for a year in the US?” and he answered me by pulling a book out of his bag. He turned to the domestic service program listings. I nearly fell off my chair. How long had he been carrying this book around? There were hundreds of placements!

“I think you’d love this one. You should apply. Krista, this would be so good for you.”

With those words, I saw the person I once was and had it in me to be again. Somewhere, under layers of false enthusiasm, I had a good heart. Alex had not judged me. But I had judged myself.

In July of 2010 I was accepted to a full-time service program in Chicago, working as a technology teacher for grades k-8. I completed my year in June and have recently begun my second year as a grant writer and web designer, among other things, with a different program. My year of service helped me to heal the hurts as well as some longer held, deeper pain. I finally faced the part of myself that bought into the hopelessness. I am now grateful for having a place to sleep, instead of lamenting my tiny bed. I used to value education and job responsibility because it meant security and income. Now I honor those things because they can benefit those without the opportunities I have been given. Next September could bring any number of new possibilities. I don’t venture to guess what they are anymore. Instead, I have chosen to believe in the mystery and to be grateful that I have been included within it.