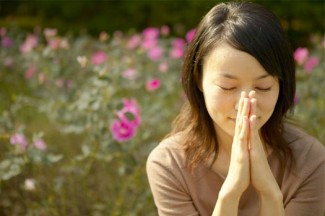 Busted Halo contributor Carolyn Martone goes on silent retreat. Find out what happens during the final days of her eight days in silence and reflection at Linwood Spiritual Center in Rhinebeck, N.Y. What happened days one through four? Read Part 1.

“Why don’t you go and rest by the pool?” my spiritual director Elizabeth Anne suggested. I was floored. The pool? Was it really okay to sit by a pool? This wasn’t spring break in Cancun or an episode of The Love Boat after all. Ninety degree heat or not, this was a serious week of making a serious commitment to begin the very serious Spiritual Exercises.

Didn’t Ignatius suffer in the desert of Manresa for a month in order to grow worthy of hearing the voice of God? It had to have been hotter in the desert than here in upstate New York. Hadn’t every underlying theme of 17 years of Catholic education been to fear pleasure in each and every one of its forms? To my surprise, more than half of the retreatants were there, swimming or lying in the sun. Unlike me, they did not seem to be obsessing over the antiquated notion of “You can’t have fun and still be Catholic.”

I tried to swim a few laps, though every fiber of my being wanted to shout out “Marco?” knowing instinctively that hearing a response of “Polo!” was not an option here. Would I even make it to the end of the week?

Today I was supposed to leave the retreat for a few hours for a meeting. I found myself not wanting to leave the grounds. The thought of engaging in real-world conversation seemed burdensome; plus, it would threaten any progress toward surrendering to the silence. I decided to stay. The meeting could wait; so could Walgreens. Who needs Burt’s Bees when you have the Lord? Maybe it’s taken me five days to accept the silence, but I can’t deny that it is working. I’m becoming aware that there is a world beyond the physical; the burdens of this life are temporary.

I was lying in a hammock overlooking the Hudson River when the words of a Wordsworth poem suddenly came to mind: “The world is too much with us.” I looked around at the beauty of the Hudson River Valley and felt embraced by the summer sun. The silence became my salvation, and I drank it in, experiencing a blissful state of what I can only compare to childhood. The silence returned to me a sense of gratitude for things I usually took for granted. I didn’t talk to birds or count the stars, but I noticed them again, for what felt like the first time. I allowed myself to do absolutely nothing and somehow experience everything. “This is what it means to be free.”

By nightfall, I no longer missed Yahoo!, Google, or Netflix.

For more on the benefits of retreats and some resources to help you find a retreat center, check out this What Works column: Enjoy the Silence.

I tried centering prayer for the first time. I’ve never been one for meditation. I get bored quickly. I want to be doing something – anything! My mind tends to react to the very word “meditate” much like my dog reacts to the sight of her leash being lifted off of the doorknob: ready to bolt immediately. The reason I could more readily accept centering prayer was that it was directed at God. I sat on a wooden porch swing that overlooked the Hudson. Looking out at the river, I repeated five words over and over again: “My soul magnifies the Lord.” I would say these words over again to myself until the noise in my mind began to fade. These were Mary’s words, not mine. Mary who sacrificed everything, Mary who said yes without hesitation, Mary who made possible the incarnation. The words calm me.

The last day of the retreat, I felt some anxiety about going back into the world. I was most afraid of losing the sense of peace I finally found in the silence, once the realities of my life set in. Yet I had changed. I had a coping mechanism now, a new way of embracing my place in the world. So many aspects of Ignatian spirituality are practical and easily made personal. During the week I had started to practice The Examen, a nightly reflection on the events of one’s day that focuses upon gratitude. The Examen is a daily reminder that I am one being in a universe of many. When my problems become overwhelming, I’m reminded that it could always be worse, and for many people in the world, it is. I become grateful for the ordinary aspects of the day that when written down, become extraordinary, miraculous even. But could I continue my life seeking God in all things? I had already found God in the existence of my dog, caffeine, Nick Drake’s Pink Moon CD, and 1970s Saturday Night Live episodes. Now I needed to locate God in the existence of Fox News, chain restaurants, and people who push in the subway.

In the time that has passed since the retreat, I have often missed the silence. Somehow, the moments when I’ve tried to recreate the retreat on my own just aren’t as powerful as those given to me when I found myself lying in a hammock overlooking the Hudson. (The view from my couch is simply not the same; go figure.) Yet, what remains is the faith that I must continue to listen and to wait. To take as much time in silence as my life in the world will allow. Sometimes on a crowded subway train, when I feel trapped in time and space, or times when I feel imprisoned by rules I did not choose but must follow if I want to keep citizenship in this world, I go back in my mind to that afternoon when I swung back and forth on a porch swing over the Hudson River, feeling as though I was being pushed towards a God I hoped would catch me.