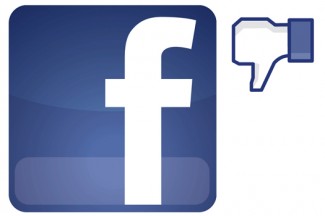 Facebook and I are not friends at the moment. We’ve been good acquaintances for years, overall no major qualms. If I had to classify us on Facebook, I’d say we’re “In an open relationship.” I don’t want any kind of serious or committed relationship with it lest I become a serious addict.

Earlier this year Facebook viciously turned on me, throwing me into an incredibly awkward situation. I have this friend, let’s call him Boy Z. We were flirtatious co-workers with the worst of timing. He had a girlfriend. Then I moved to Germany for nine months. Then he decided to major in computer science and never see the light of day. But senior year fates swung in our favor. Both back in the same country, both newly single, and both living in the same dorm, even routinely running into each other in the elevator.

A few months into this ideal timing he did something about it. One night I sat curled in my zebra chair, trying desperately to summon brilliant Othello insights from the depths of my senior spring brain, when I heard the familiar ping of a new Facebook chat. Boy Z. One new message.

Hey Courtney. I like you. And have for a while.

I froze in my zebra chair, mouth dropped and eyes bugged out. Really? Was he kidding? Was he sober? With no body language to read and no idea what to do, I decided to take advantage of my virtual situation and quickly logged off, whining about my lack of decent Internet service in my next Facebook status. Two could play at this awkward Facebook game.

The next day I pooled some courage and e-mailed him I liked him back, to which he replied with repeated pokes on Facebook. Exasperated with the online extent of our relationship, I told myself it was kind of cute in its own awkward way. I could move past an awkward beginning if it meant it could lead to anything real.

But alas, the next day at work Boy Z could barely look at me, much less talk to me. When I tried to talk to him after our shift he practically ran the other way, tripping over his size 12 feet in a desperate hurry.

Luckily, I have ample self-esteem and didn’t take it too hard. I was more confused than anything. Why could he flirt with me on Facebook but barely look at me in real life?

My friends’ stories and my own experience forced me to think about the social medium that today is almost as common as having a cell phone. It seems like anyone without a Facebook account is either Amish or kicking the addiction for Lent.

I turned to friends for help in my confusion, wondering what bits of Facebook courting experience they had. Did any of them have an awkward saga like mine? What I learned was that not one, not some, but pretty much all of my friends had a Facebook story to tell.

Some of them were funny. My sorority sister Facebook stalked the lights out of her chiseled baseball-playing neighbor. She then accidentally shared her similar love of the Red Hot Chili Peppers, realizing in horror 10 seconds too late that that information had come via her stalking and not a real conversation. My friend Jon had a girl propose to be his girlfriend via Facebook, asking to be in a relationship after only two dates. Awkward.

Some really weren’t that funny, but were very real relationships that had suffered at the hands of Facebook. Unnecessary resentment from misinterpreted wall posts. Fights from misconstrued song lyrics postings. Facebook caused a whole lot of general jealousy and misunderstanding.

My friends’ stories and my own experience forced me to think about the social medium that today is almost as common as having a cell phone. It seems like anyone without a Facebook account is either Amish or kicking the addiction for Lent.

Why are we all so addicted to Facebook? All I honestly see sometimes is a false sense of relationships, of life. And underneath, a harsh truth: as fun as Facebook is, it’s not real. No matter how many people’s profile pictures you peruse, no matter how many people “Like” your status, you are ultimately sitting in your room alone, dawdling away on your computer. Life happens beyond computer screens, and virtual relationships cannot sustain or create real human relationships.

That’s really what worries me the most I guess. Real relationships, real connections suffer. We substitute virtual interaction for soulful conversations, Facebook poking for a flirty shoulder nudge. It just isn’t the same. It doesn’t and will never lead to the same kind of happiness and fulfillment that real relationships do.

I think my good friend Matt said it best when he posed this question, “Can you think of anyone that turned what was originally a Facebook relationship, friendship, or otherwise, into a real one?” And after a solid two-minute scan through my head, I could honestly say that I couldn’t. He answered, “Yeah, me neither. I guess Facebook can’t be that good for relationships if that’s the case.”

That being said, I definitely see and appreciate Facebook’s benefits. It’s great for quickly reaching people, especially international friends or forgetful friends like mine that are constantly losing their cell phones. And I would be a hypocrite if I said I never Facebook stalk a guy I’m interested in, performing a virtual pre-screen to make sure he’s halfway normal.

But life is about balance, and it seems far too easy sometimes to live in a safe and virtual Facebook world when the real one gets to be a little too much to handle. Before getting too caught up in a Facebook life, remember that the real world misses you and real people need to hear your voice once in a while. God doesn’t care how good you look in your profile picture or how happy and clever your status is, as long as the person behind the profile is a real soul being loved and nourished.