As Occupy Wall Street (OWS) protests continue across the country, Busted Halo® went to visit the protest in Zuccotti Park in New York City to see what role people of faith are playing in the movement. While some say the OWS movement lacks a clear message, the message Christians standing with the movement share is straight from the Bible: God wants all of God’s children to have enough.

Each Sunday afternoon at 3:30 in Zuccotti Park, New York City faith leaders come together to bring a worship service to OWS. Speakers use a “human microphone” to share their message, shouting “Mic check,” and speaking in short sentences that are repeated by the crowd. On a particular Sunday, one United Methodist pastor shared a short homily:

“Next time someone asks me to write ‘occupation above,’ I’ll know what to write, I’m gonna write love! Gonna love my God by loving my neighbors. When it comes down to it, that’s what we’re here for!

“So we’re standing here with the 99% whose money’s all spent, who can’t pay the rent, whose spirits are bent, whose last check got sent, who don’t know where it went. But they don’t have a cent. So we’re at this event to raise our voices in dissent, to tell the people in charge that it’s time to repent. We join this occupation because we care about this nation. We want a transformation for this whole situation.” 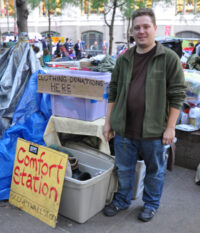 Peter lives in Brooklyn, moving back to New York City after losing his job with the National Park Service seven months ago. He is still looking for a job. “I could spend my time at home looking for work but come here in the morning and leave in the evening. It’s my job now.” Peter volunteers at the OWS Comfort Station, which collects (except food) for OWS — primarily clothing and toiletries — that are available for the people living in Zuccotti Park.

“OWS is about the idea of freedom of speech,” Peter said. “We are an American movement — not anti-American.” (There’s a donated American flag attached to a tree next to the Comfort Station.)

Peter attended Catholic school for 13 years and identifies that his Catholic faith has played a role in his decision to join the protest. “In Catholic school, I was taught about social justice. That’s the heart of Christianity. ‘Do unto others as you would have them do unto you.’ It just isn’t right. There are people who have much more than they need. There’s a great disparity. Corporatism is unhealthy — it’s against God. They are artificial things, not living things. It’s anti-Catholic that banks have gotten so much larger and bigger than anything else. Large corporations have gotten away from people.”

Erica is a Unitarian Universalist and student at Union Theological Seminary. She is part of a group of OWS Protest Chaplains who are a daily spiritual presence in the park. “We wear signs and name tags that identify ourselves as chaplains,” Erica said. “People come up and talk with us and sometimes ask us to pray with them.”

James and other faith organizers were on retreat in September when they decided to build a Golden Calf in the shape of the Wall Street Charging Bull. They drove from Washington, DC, to New York City with the golden calf in a U-Haul and marched from Judson Memorial Church in Greenwich Village downtown to Zuccotti Park.

“The experience was exhilarating,” James said. “You could hear the cheer erupt from the protestors. We were trying to bring our voices to the protestors.

“The image speaks to people from a faith tradition. There’s a great suffering in our culture related to consumerism and an emphasis on profit at the expense of others. There’s something not right. Banks are not producing jobs or a product, so there’s something wrong with this. Bank of America wants to pass off fees to bank card users, its not sharing in the suffering.

“This is not meant to personally attack anyone. We are saying that there is a real sickness in our culture — focused on greed and overconsumption.

“My faith makes sense when it’s put in the context of the suffering of the world. Faith just doesn’t happen in church on Sunday. I want my faith to be alive and active in the world. I want the stories of the Bible – idolatry – to be relevant to Catholics today. The biblical stories we are all taught have something to add to this conversation.”