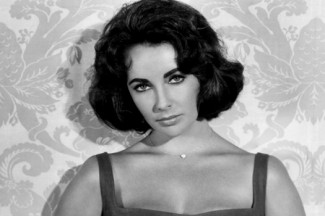 Could there have been anyone more gorgeous, more sumptuous, and more glamorous to a girl growing up in the ‘50s and 60s than Elizabeth Taylor, or “Liz,” as we called her? The very shortening of her name to “Liz” is a clue to how we took her to our hearts. She wasn’t distant or far away; she was approachable, loveable. From the fresh young girl with the impossible violet eyes in National Velvet, to the sultry woman attired only in a slip in Butterfield 8, to the raucous and angry wife in Who’s Afraid of Virginia Woolf, Liz never played it safe. She took risks.

Her wide-eyed stare into the loving eye of the camera did not just spell out her beauty; it announced, “I am who I am — take it or leave it.” She seemed to fill out the pores of her skin in a way few other women did, for me at least. Her vitality sizzled. Her soft voice beckoned. And whether or not she always was acting with great skill, she always was “Liz” with great skill.

Her refusal to play herself down, to become the kind of safe woman who was admired at the time I was coming of age, was iconic for me. She was like a strong flaming candle I could take into the darkness of adolescence.

When I studied abroad in Oxford, England, in 1965 to 1966, she was there with Richard Burton, working on Who’s Afraid of Virginia Woolf. Somehow her presence there — overlarge, almost too energetic to be contained by the straight-laced English — linked up in my mind with my conversion to Christianity that summer. My sudden experience of God’s overwhelming love — the sense that every pore in my body was filled with blazing light — my deep and utter conviction that life would never be the same again — was in a much bigger way akin to Liz’s vitality. She was an over-the-top woman, and my experience of God’s presence was definitely an over-the-top moment, which has never left me.

Her refusal to play herself down, to become the kind of safe woman who was admired at the time I was coming of age, was iconic for me. She was like a strong flaming candle I could take into the darkness of adolescence. She reminded me that it was okay — more than okay — to be passionate, to be sexual, and to love beauty.

In the years to come, as her legendary beauty sagged and she put on weight, she transformed herself into a person who was friends with Michael Jackson — himself dancing on the edge of acceptability — and an advocate for those suffering from AIDS. She showed me how to grow old — that filling out the pores of her skin was so much more than beauty; that it was about the largeness of her soul pressing the limits of her incarnation. And at the end, that is what causes her to still burn brightly like a candle in my hand.