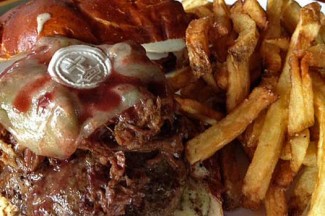 Who doesn’t like a good burger? Well — that depends on who you ask and in this case, what the toppings are. A Chicago restaurant called Kuma’s Corner is serving up a new menu item this month called a “Ghost Burger.” It’s a 10-ounce patty topped with an unconsecrated communion wafer and red wine reduction sauce. Sounds a little bit like…Hey wait a minute! The burger was created to honor the Swedish band Ghost and has stirred up some controversy. Louis Sullivan, Busted Halo Intern and Contributor, and Fr. Steven Bell, CSP, Busted Halo Associate Director, weigh in on the question: Is Kuma’s Corner Ghost Burger offensive?

Louis Sullivan: Personally, I don’t have a problem with the Ghost Burger. It’s not something I would order, but nonetheless it doesn’t offend me personally as a Catholic. From where I’m standing, it’s a publicity stunt and little more than that — Kuma’s Corner is trying to drum up some attention for their restaurant and the band the burger promotes. It certainly has our attention, but to let some red wine and an unconsecrated communion wafer that anyone can buy on Amazon get us all riled up is only going to give these people exactly what they want. The restaurant’s owner has been gracious about the situation, donating to Catholic Charities of the Archdiocese of Chicago (who turned the donation down) and stating that the burger is not intended to offend anyone. Let’s not forget that the true meaning of the Eucharist is not in the bread and wine as earthly food, but in the miracle of their consecration and transubstantiation into the Body and Blood of Christ. What’s on the burger isn’t the Body and Blood — it’s some red wine sauce and a wafer.

Fr. Steven Bell, CSP: It is true that the Ghost Burger does not feature the consecrated Eucharist. However, there is still a rather serious offense committed. These particular wafers were made for the purpose of consecrating them at Mass. The intention of the manufacturers was to have the work of their hands assist the prayers of the gathered faithful during worship. It’s an intention that is typically printed right on the box. Many (if not all) of these manufacturers are religious organizations who work prayerfully, in fact for some, their work IS their prayer. So, using those wafers as a burger topping becomes a serious affront to the prayerfulness of the people who created them, as well as the ones who use them.

All things have a value before they are instituted as sacred. Imagine how you might feel if you prayerfully whittled crucifixes that someone purchased to use as tent stakes and justified their actions on the basis that they were used before they were blessed, thus they are pretty much only carved wooden stakes. Or, how might you feel if you spent time making hamburgers for a picnic only to have several of the guests use the meat to feed their dogs and the bread to feed the birds before the picnic started. One can say that in both of these scenarios no real harm was done. Yet, intuitively, we know that there are many ways to inflict harm. Kuma’s Corner may not see any harm done in creating their Ghost Burger. And they may have the best of intentions while trying to promote musical stylings and donating to Catholic Charities. But, in fact, the harm that is being done by using something created prayerfully for the use of prayer is too egregious to be excused by such intentions.

Now that you’ve heard from Louis and Fr. Steve, what do you think? Share your opinions in the comments section below.