Take a good look at my picture on the right: if you saw me walking around in New York City I look just like any other girl wearing an H&M shirt, Blackberry in one hand and Starbucks coffee in the other, right?

Would you guess that I’m a Muslim — born and raised? Maybe not. But I am. And as of late, I’ve had to defend my religion more times than I can count.

This is the typical dialogue I encounter when people find out I’m Muslim:

Me: “Yes! I am.” (I smile hard, to seem friendly and maybe overcompensate for any stereotypes said person has about “Moz-lems” — it doesn’t usually work.)

Me: “Well… I’m your typical modern Muslim girl in the city, but most people don’t know about us.”

And that’s where that conversation usually ends. It’s true that some people doubt the existence of moderate Muslims — and yet here I am, a testament to this fact.

I don’t wear a hijab, the veil some Muslim women choose to wear, and I don’t wear an a’abaya, a loose dress worn by many veiled women over their clothes.

These are both articles that many Muslim women have adopted, but I am not one of these women. My mom and my sister don’t wear the hijab either. In fact, my parents almost don’t want me to wear a hijab permanently, because they fear it’s asking for it in this anti-Muslim climate. And I tend to agree.

But again, I am still a Muslim, and the lack of these material items does not make me any less so. There are plenty of moderate Muslims in America, and overseas. People who pray, fast from sunrise to sunset during the month of Ramadan, and believe in Allah, the Arabic word for God. But, we still enjoy a good movie or a rerun of Friends as much as the next person.

Maybe we’re just not obvious to some people because, as you can tell from the above, we may not necessarily “look Muslim.”

I have to admit, the attachment of a religion to the mere physicality of a person has me wondering: “Really? Do people really think this way? Does Paul over there look Christian? What makes him look that way?”

Then I realize the time spent on this sort of questioning on my end can be better spent educating people on the moderate Muslim majority. That’s right: majority.

It may seem surprising that a large group of moderate Muslims exists when all one hears about is Mohammad So-and-so getting busted by the FBI for making a bomb in his basement.

But the truth is that the majority of Muslims don’t want to hurt anyone. Most are not terrorists. Most shun such activities and view these radicals as the worst examples of our religion (if you can even call them an example). I personally don’t view these extremists as Muslims at all. And I’m angry with them for convincing people that Muslims are evil, barbaric and backwards-thinking men and women.

As a young Muslim girl living in New York City, I hope I’ll be an example of the modern Muslim majority that isn’t evil, barbaric or backwards-thinking. My life is every bit as complicated as a normal 22-year-old girl’s, if not more so because oh, you know, some people think that I might be a terrorist.

I moved to New York this past May to intern at Al Jazeera English, an international news outlet. I’m a budding journalist, and what better place to cultivate my career than the media capital of the world?

So, with two large suitcases in hand (yes, I sort of flirted my way out of overweight luggage fines) I boarded a JetBlue flight from Orlando, Florida, to the city that never sleeps. And while I normally knock out during flights, I couldn’t this time because I kept thinking about how different my life would be here. Type A person that I am, all of this change that I couldn’t really control scared me to death.

Everything was new: new city, new place, new friends, new summer gig, new future. It was in every way the New York I imagined — except this time, I didn’t have to imagine myself here.

I started off interning with Al Jazeera English in the United Nations headquarters, which was a blessing in and of itself. I ate lunch next to foreign journalists and delegates, listened in on Arabic conversations (a bad habit, but I can’t help it!) and marveled at the diversity of the U.N. lunchroom.

I could finally let out a sigh of relief, because I knew in my bones I belonged here.

After an amazing three months at Al Jazeera English, I once again packed my bags and moved to Queens to settle into my new place.

To say that I fell in love with New York is a gross understatement. I couldn’t imagine living anywhere else, and the thought of returning to Florida to my boring life depressed me.

I decided to stay in New York to work on my master’s at the City University of New York’s Graduate School of Journalism.

It was there I met Monica, a familiar name here at Busted Halo. She’s my first Jewish friend, and I’m excited to get to know more about her religion because, the truth is, I know very little about Judaism.

I do know, however, that there are many similarities in our religions and in our cultures. Just ask any Muslim or Jewish girl how hard it is to find a good Muslim or Jewish guy, and you’ll find an overwhelming consensus.

So once again, New York has brought me something new to explore. In a way, meeting Monica serves as my own education about Judaism. I can only hope I will provide a similar education to those wishing to know more about the modern face of Islam — even if that face belongs to a 22-year-old. 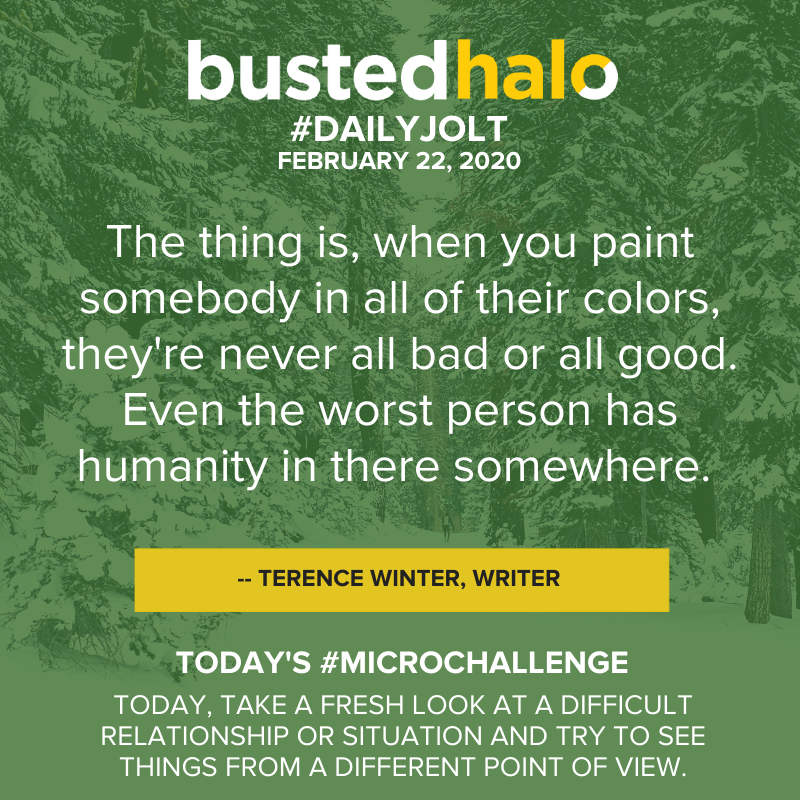