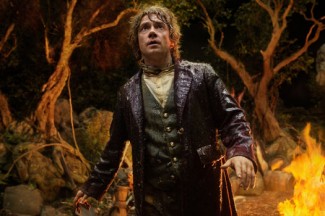 “Early on Tolkien had a car, he drove like a manic,” explains Daniele Lucas to a group of 20 people taking her J.R.R. Tolkien Tour in Oxford, England. “Tolkien endangered everyone’s life who was in the car with him, including his own. Soon afterwards, he completely lost his taste for driving anything motorized.”

In Oxford, Tolkien tours are common and tourists make daily pilgrimages to such sacred spots (scroll down for some photos) as the colleges that Tolkien taught at, the pubs where he met with the Inklings (his informal writing group), the sidewalk where he read early excerpts of The Lord of the Rings to children and the house where Tolkien lived when he wrote The Hobbit. (The first film of a three-part series based on The Hobbit opened in theaters last week.)

But few know the main Catholic church he attended when he taught and raised his family in Oxford or, even, how his faith influenced his work.

Tucked away from the street, St. Aloysius stands stately and well weathered. The 1875 gothic-revival church is an imposing structure on its small parcel of land, sandwiched between two non-descript buildings at 25 Woodstock Road in Oxford.

Tolkien even wrote in a letter: “The Lord of the Rings is of course a fundamentally religious and Catholic work; unconsciously so at first, but consciously in the revision.” And Father Richard Duffield of St. Aloysius, who sometimes refers to Tolkien in his homilies, agrees. “The key that unlocks them all [the Catholic wisdom in Tolkien’s work] is in the power of the ring as an image for the hold sin has over our lives,” he explains.

Duffield says that everyone who possesses of the ring gets corrupted. “Gollum is the most extreme example. But even Bilbo and Frodo are shown to be damaged by it. Those who hold the ring become deceitful, possessive, manipulative…the list is endless and we know it all because we recognize what sin does in our own lives.”

Scholars of Tolkien, including Matthew Dickerson, author of A Hobbit Journey, adds that the Lembas, the thin small cakes that the elves make and eat, have sacramental or even Eucharistic connotations. Dickerson says that Marian imagery also abounds in Tolkien’s work. “The Vala Elbereth, also called Varda, is certainly a Marian figure. She is a venerated and revered queen, whom the elves of Middle-earth call upon in times of need. Her name alone has power, and when those in need call upon her, help comes.”

While winding her tour group through the crowded and medieval streets of downtown Oxford, Lucas announces: “The Roman Catholic religion was the most important thing in Tolkien’s life.” She says that after Tolkien’s mother (Mabel) became a widow that she converted to Catholicism in 1900. Disapproving of Mabel’s new faith, Tolkien’s parents and Mabel’s own family, both proud Protestants, cut her off financially.

Life suddenly got more challenging for the young mother raising two children, Lucas explains. Mabel succumbed to her diabetes, couldn’t afford a doctor and died at 34 years of age. “So, for Tolkien, who was only 8 years old at the time, his mother was a martyr for her faith.”

Lucas says two of the major influences that Mabel had on her son were: number one, instilling a devotion for the Catholic faith, and number two, a love for education, including an interest in etymology, and learning languages — German and Latin.

The Eagle and Child Pub

Nestled in a corner of the pub where Tolkien, C.S. Lewis, and the other members of the Inklings use to met, Mark Atherton, author of a new book on J.R.R. Tolkien titled There and Back Again, says that while the death of Mabel contributed to Tolkien’s devout Catholicism that it doesn’t explain it all. Atherton says Tolkien’s Catholic convictions were heart-felt and reveals itself in how he advised his children on faith, one of who, John, became a Catholic priest.

Atherton, a Lecturer in English Language and Literature at Oxford University, explains that Tolkien also believed that all the world’s myths and legends proved the truth of Christianity, by reflecting the one true Christian story. Atherton says this view influenced C.S. Lewis, who went on to write the popular Christian allegory The Lion, the Witch and the Wardrobe. But, Tolkien never liked C.S. Lewis’ overt allusions to Christianity in his stories.

“Tolkien felt that if you try and make those Christian connections too obvious in your stories, then it risks becoming too mechanical,” Atherton says, digging into his English Baked Pancakes near photos of Tolkien and C.S. Lewis on the wall. “And then the story loses its power of myth.”

Behind the 750-year-old walls of Merton College, Oxford, where Tolkien taught English Language and Literature, Phil Entwistle, a Ph.D. student of politics, sits in a study, resembling a cozy Hobbit hole with well-padded chairs, plush carpet, and well-worn sofas.

Entwistle says he is proud to be a member of a college where Tolkien taught from 1945 to 1959. As a Christian, he says he likes how The Hobbit celebrates the little guy succeeding against big odds, like David versus Goliath or Moses versus the great pharaoh of Egypt.

“For me,” Entwistle says, taking another sip of tea not too far from the private garden where Tolkien often milled about, smoking from his iconic pipe. “The Hobbit — like so many stories in the Bible — is just about little people picked to achieve great things.”