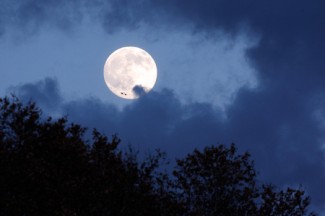 From my high school students this time of year I often get a lot of questions like this:

“Mr. H., why are we celebrating Halloween? I mean, isn’t it a pagan/demonic/commercial holiday anyway?”

Well, let’s look at a tiny bit of the history of this ghoulish night of witches and goblins. Or is it a gleeful night for saints and angels? Let’s go way back to the 8th century, when a chapel dedicated to the memory of all the holy martyrs in Rome was declared. This feast, which happened to coincide with other pagan festivals — such as the Irish samhain (pronounced “souwain”) celebrating the end of the harvest and the beginning of winter with a touch of playful remembrance of the dead — ultimately became a universal Catholic celebration. The evening before a holy day is typically referred to as the “eve” of that day. In Catholic liturgy, solemnities or major feasts are considered to begin at sundown on the night before. Since the evening of October 31 would therefore be All Saints Evening or All Hallows Eve this has been shortened to Hallow e’en or Halloween. So there’s the simplest explanation of the “why” of Halloween. You take a noble cause — celebrating all the saints and martyrs — place it near a pagan holiday and extend the celebration to the night before and certain elements of that pagan day are bound to crossover to the religious day.

Our modern practice of sending the little ones begging for candy has a connection to the celebration of the saints. There was, in the Middle Ages, a custom of “souling” in which the poor would go through neighborhoods begging for food in exchange for prayers for the dead. This souling took place November 1, and the prayers would be offered on the following day, All Souls Day, which is a day of remembrance and prayers for all the faithful departed. For some customs, there seems to be no general consensus as to when or how the practice of dressing in costume came about.

For other Halloween traditions, such as carving pumpkins into jack-o’-lanterns, the historical path is easier to trace. Once again, those crafty Celts found a way to turn turnips into lanterns by hallowing them out. In this country, the pumpkin was more plentiful then the turnip and so it proved a worthy replacement. 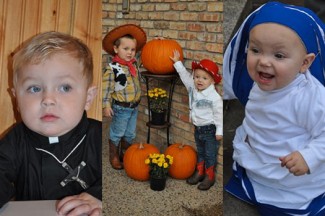 But perhaps this would be a good time to look at how we as 21st century Catholics could add to the centuries-old collection of Halloween traditions. Remember, it is a celebration of our saints, after all, and it’s not as if there’s a law banning innovation. But since it is essentially a celebration of our faith why don’t we start by adding to the party atmosphere?

My wife and I try our best to instill a sense of true celebration in our kids where feast days are concerned. Owing to my wife’s expert baking abilities this usually translates to a specialty cake. This year, for instance, she plans on shaping cake batter into the Roman Pantheon, the church commemorating all the saints. Just kidding. Apparently she’ll be making cupcakes with images of some of our favorite saints iced on top. Truthfully I don’t know how she ever planned on creating the dome.

We’ve decided to keep the big traditions. Our kids really enjoy having pumpkins around. Daddy really enjoys seeing his two angels trying to pick them up. And my daughter, Rita, who eats everything in sight, is so adorable as she tries to find a way to get her tiny mouth around the giant orange-colored rinds.

But the best part of our Halloween is, in fact, the costumes. We couldn’t decide at first how to approach this one. Should we turn them into headless monsters or incorrupt medieval saints? As luck would have it, it seems we could do both! We decided that during the day we would dress them as saints, preferably two saints with a connection to one another, while at night they could be their favorite characters for trick-or-treating.

Last year they were Mother Teresa (my daughter is indirectly named for her) and John Vianney (it was the year of the priest). Since their dad is a high school teacher and since teenage girls go nuts for little kids in costume, they get to come to school and show off their holy alter egos. This year, they will be Saints Benedict and Scholastica, the holy twins who founded the Benedictine order. OK, this one’s kind of cheating since the costumes, two black robes, are about as simple as you can get. When they get home they’ll change into Woody and Jesse from Toy Story. We figured it was appropriate since we just moved to Texas.

We’ll still get around to all the “scary” elements of Halloween. The kids enjoy hanging ghost and witch decorations and wearing their glow-in-the-dark skeleton pajamas to bed. I’m not sure they’ll ever get around to watching The Exorcist or Carrie as long as I’m alive; but I suppose some scary movie, like anything with Lindsay Lohan, could be acceptable. So, Halloween will continue to thrive in our house. Only this celebration will include a nod to the real meaning behind the holiday. And the best part is all the candy that Daddy gets to “test” before letting the kids have at it.